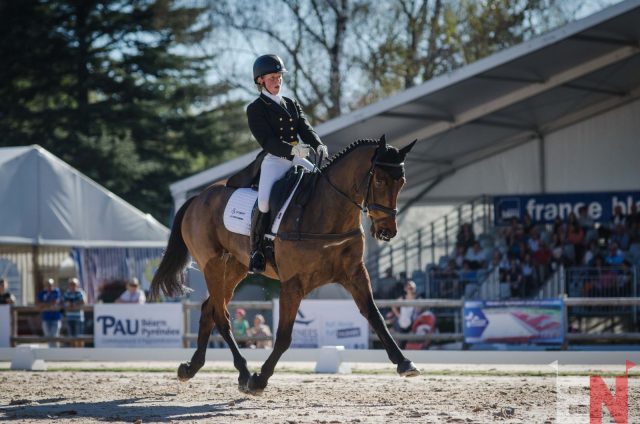 Several riders flirted with a sub-40 mark in today’s dressage, but only one managed it. British rider Ros Canter and her own Zenshera threw down the gauntlet with a 39.7, putting themselves in an enviable position going into the next phase. Remarkably, in 20 international runs, Ros and Zenshera have only had one problem in the cross country – Ros fell in the Nations Cup competition at The Plains in 2016. Their only other non-completion came in the form of a withdrawal before the final phase in the CIC3* at Bramham in 2014. This year, they’ve notched up several strong results, including ninth place at Luhmuhlen CCI4*. They usually pick up a smattering of time penalties, so on a course where the time will be tricky to make, this could be influential for them. 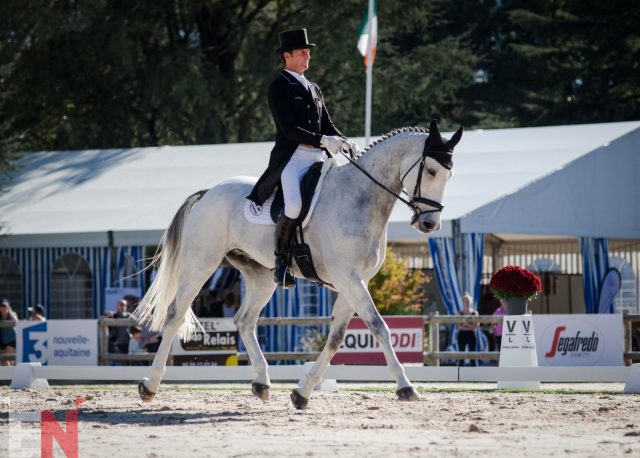 Mark Todd and four star first-timer Frankie Reid-Warrilow each came within a hair’s breadth of breaking the 40 barrier, both scoring 40.4 on Kiltubrid Rhapsody and Dolley Whisper, respectively, to sit in joint second. 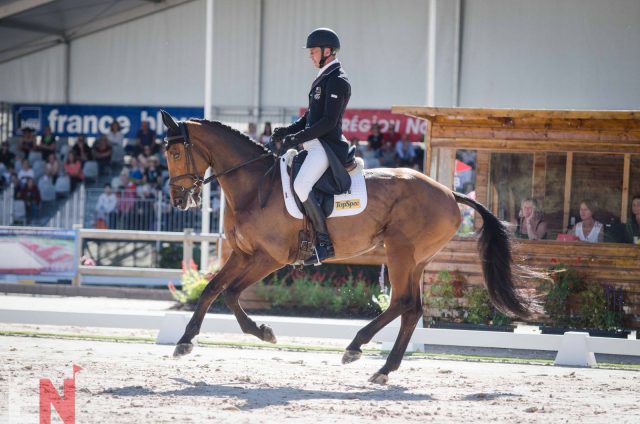 Andrew Nicholson and Qwanza pick the right moment for a PB. Photo by Tilly Berendt.

Andrew Nicholson and Qwanza took an early lead with their score of 42.1, a personal best in international competition for the horse, but dropped down to sixth as the day progressed. Andrew is aiming for a record 50th CCI4* completion this decade, and with two horse’s in this week’s competition, he seems unlikely to fail. 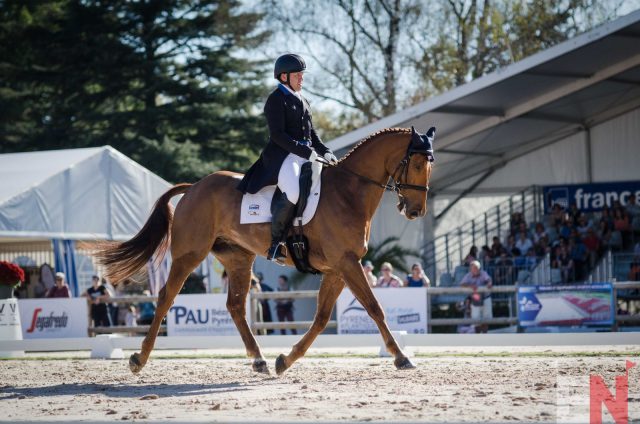 Both Buck Davidson and Allie Knowles sit in the top 20 after the first half of dressage. Buck’s test aboard Copper Beach earned them a 46.1 and provisional 11th place.

“He’s very reliable, you know, he just goes in and does his thing,” says Buck. “He’s maybe not the fanciest, but he doesn’t make any big mistakes. I got a little bit nervous coming down here, as you have to ride by the cross country and I’m not sure they don’t think they’re heading out for cross country. I’m happy with him – it can always be better, but I think we’re in the hunt, at least.” 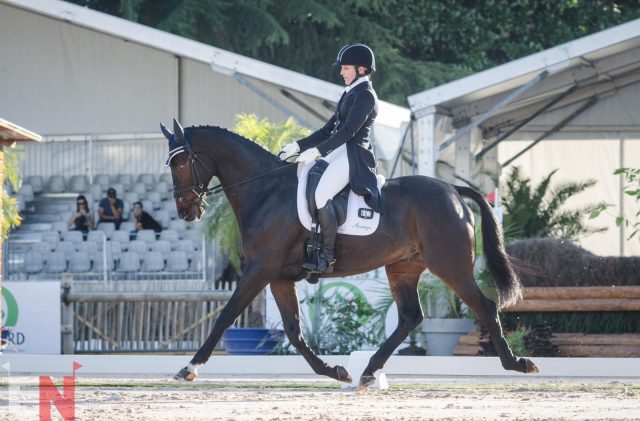 His student Allie Knowles rode Sound Prospect in the final section of the day and produced a relaxed, flowing test for 49.8 and 17th place.

“I’m feeling great! He was as good as he’s ever been in the walk and the trot – usually he gets nervous in the trot, and I can rely on the canter,” she says. “We’ve really been working on our flying changes, and that sort of came through in my canter work – he was a little bit less predictable than he normally is in the canter, but he was way more reliable in the trot, so I’m feeling really happy with that! My goal is always to break the 50s and we’ve been knocking at that door, so to get a 49.8 – I will take it! That was the first test where I thought, ‘oh my gosh, I can make this so much better’ – and that’s really exciting. I’m really proud of him, and we’re ready to move forward to the fun phase now!” 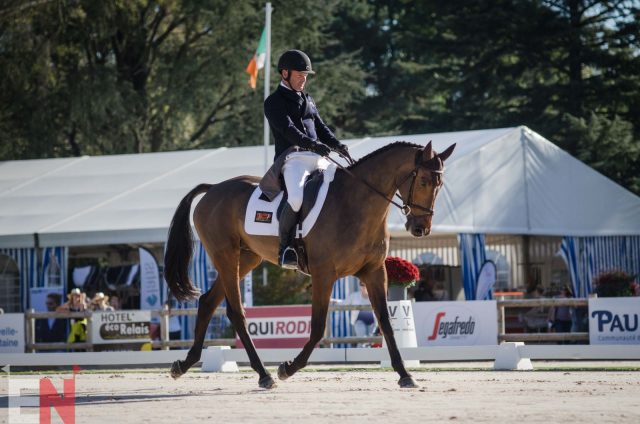 “I’m sad for a couple of little mistakes here and there, but he got all his changes today, which is great,” says Joe. “He’s not easy – he’s quite hot, and he’s really fit, but he just gets a bit better every time!”

He’s now looking ahead to the cross country, of which he laughs, “I’m scared sh*tless! No, I’m not really – it’s not tall and wide like I’m used to, but it’s very tricky. But he’s rideable and nippy and it’ll really suit him.”

Today’s leaders sit on enviable scores but tomorrow is another day, and the morning’s session sees several horse and rider combinations who could easily threaten them, including another ride each for Andrew Nicholson and Mark Todd, as well as last week’s Le Lion winner Astier Nicolas. According to the stats chaps at EquiRatings, Michael Jung holds the record for the most sub-40 scores at this event – he’s notched up four – and his horse, La Biosthetique Sam FBW is not only the undisputed champion of absolutely bloody everything, he’s also got the lowest dressage average in the field at 36.3. 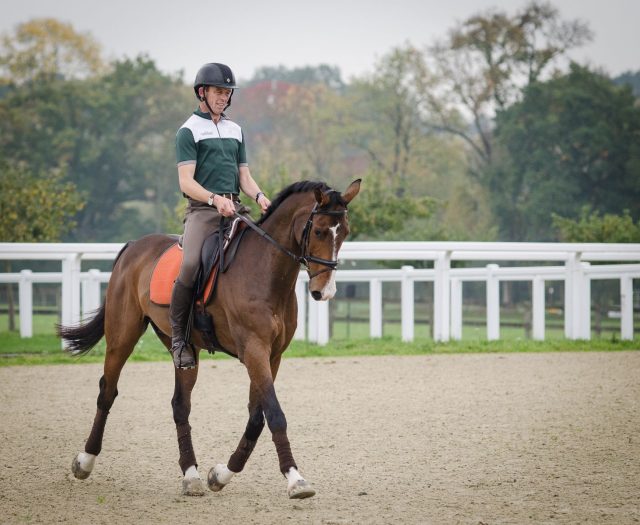 Ireland’s Jonty Evans and Cooley Rorkes Drift are able to produce a very competitive test, too, and come here off the back of a win in their final run at Oasby Horse Trials. They’ll be quietly determined to finish their year on a high after the rollercoaster ride of the summer, which saw Jonty miss a crucial chunk of the season, including the European Championships, while the horse’s ownership dispute was resolved. With a fit, well-prepared horse and a degree of separation from the summer, the duo cannot be discounted and will certainly be one of the favourites to score well.

Shane Rose and CP Qualified are also capable of sub-40 scores – they’ve tallied six in total across their CCI and CIC3* runs, and they’ve done it once at CCI4*, too, at Adelaide in 2013. If they can produce the test they’re capable of and then, crucially, maintain communication across the country, they stand a chance of a top placing. 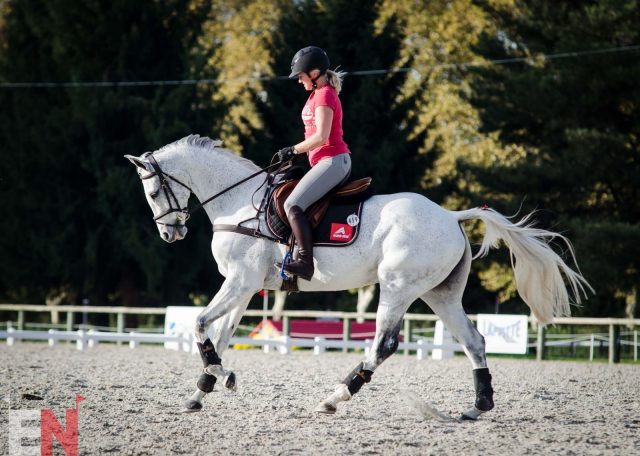 Make sure to watch Jonelle Price in her first four-star since the birth of baby Otis, too – she and Faerie Dianimo have come to Pau twice before, scoring in the high 40s both times, but they’ve also thrown down a 32.8 FOD at Luhmuhlen CCI4*, and Jonelle won’t have come here to hack around. They rarely run into problems on the cross-country so if they can come within even a few points of a PB, they could steal the win in a comeback coup.

Sam Griffiths is another top competitor on the comeback trail: he brings the experienced Paulank Brockagh here for his first big competition since a broken neck put him on the sidelines through the summer. The pair won their two runs prior to travelling to France and have experience over Pierre Michelet’s tracks – they came fourth at the Rio Olympics. 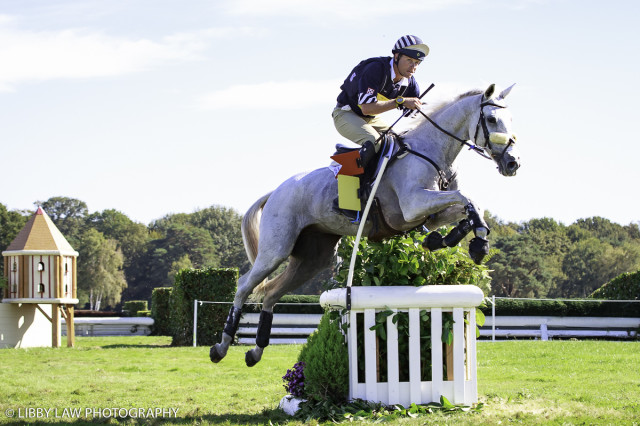 And then there’s Boyd! Boyd Martin and Crackerjack are back to dispel their Pau demons after narrowly missing out on a top ten placing last year when they were spun at the final trot-up. They tend to score in the high 40s to low 50s, so a mid-40s PB would stand them in great stead to put in a competitive run around a course that Boyd has ridden several times. They do their test at 9.56am local time/3.56am EST, if you’re a night owl and love a good live stream!

For more stats and facts about the field here at Pau, check out EquiRatings’ blog post. Got your eye on a particular combination? Compare your predictions with those of the gang at The Eventing Podcast. We’ll be back tomorrow with all the juiciest news that eventing media can provide! 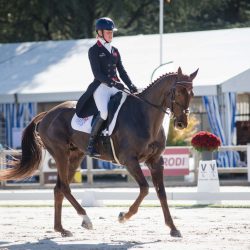 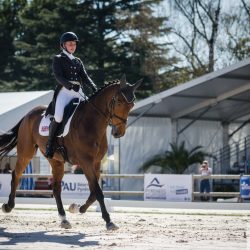 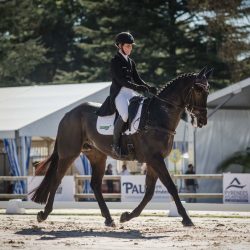 Caroline Powell and On The Brash. Photo by Tilly Berendt. 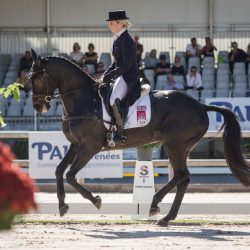 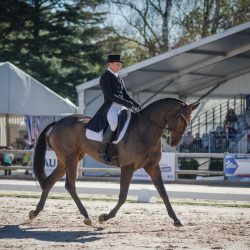 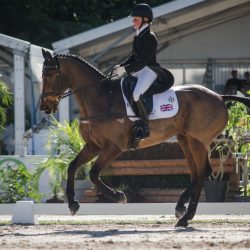