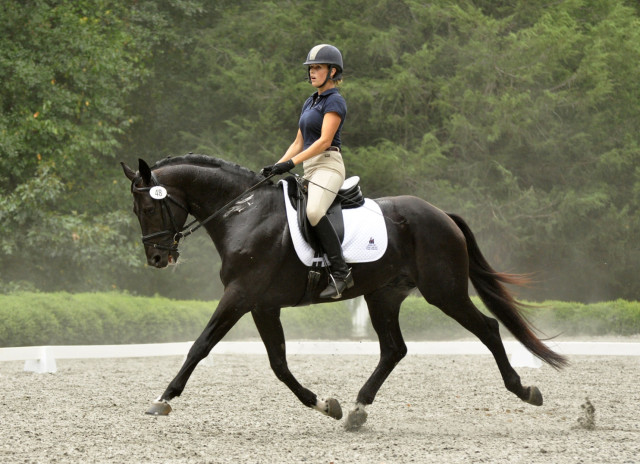 San City, owned by Linda Crabtree and ridden by Katie Bryant, competing in a YEH competition at Cedar Ridge Farm as a 5-year-old. He has since competed through Intermediate. Photo by Leslie Threlkeld.

The three-day USEA Evaluation of a Young Event Horse Prospect Symposium in Ocala wrapped up yesterday with a classroom session. Tim Holekamp discussed photography and videography and how to both capture and analyze media for sale horses, and Maren Engelhardt discussed pedigrees and how to determine how much “blood” is in a horse. The USEA posted notes from these two topics on their website.

The session concluded with a roundtable discussion about the development of the Future Event Horse and Young Event Horse programs. The programs have come a long way in the last 10 years, and the FEH/YEH committees were open to discussion on how to continue to improve them. Here are a few highlights.

One member of the audience stated that every year the gallop section seems to change and that riders don’t actually understand what they’re supposed to do. She said the previous day’s live gallop demo was helpful and confirmed that the judges are not only looking for quality of the gallop, but also a willing response when queued by the rider and easy acceleration. She also felt that especially for the 4-year-olds, galloping up a gentle hill is safest and gives the riders more confidence.

Marilyn Payne, chair of the Young Event Horse Committee, said they have determined the judges need to see the gallop on both leads, so yes, a gentle slope is ideal. The judges request a minimum of 100 meters for the gallop section, but more is even better. The committee is discussing developing a video showing the gallops of several types of horses and making that video available for educational purposes.

Another audience member asked about the possibility of running the YEH competitions under USEF rules so that there would be a technical delegate overseeing everything, as well the chance for horses to be drug tested.

USEA CEO Jo Whitehouse stated that the YEH competitions are run under USEF rules in that they are considered a test and can be run in conjunction with a horse trials. She said that if they were to be put back under the umbrella of the USEF completely, then any time the USEA wanted to make changes or adjustments to the program, they would have to comply to the two-year rule change cycle. The way it stands now, changes can be made under USEA policy and not USEF rules.

Having the ability to make adjustments to the program under USEA policy is faster and more flexible, which is crucial during these early years of the program while it is still being fine-tuned. But considering the generous Holekamp/Turner Grant is on the line for 5-year-olds, the committee members did not disagree with the idea of implementing drug testing. Karen O’Connor suggested drug testing only the top three finishers at the YEH Championships on each coast.

“Clearly as we’re developing the programs, these concerns will have to get addressed,” said Robin Walker, a Future Event Horse Committee member. “If these concerns are being presented by people actively involved, it’s our responsibility to address them.”

Marilyn pointed out that some venues are not holding YEH competitions or are dropping them because of cost and a lack of entries. She said holding a standalone YEH event is not only allowed but completely feasible. An article was published in Issue 10 of Eventing USA last year highlighting several organizers that have standalone YEH events and how they are able to combine them with other activities like combined tests or dressage shows to make them well attended and even profitable.

“We’re trying to encourage more people to have them so horses don’t have to travel so far to a qualifier,” Marilyn said.

Free jumping will be added to the 3-year-old division of the FEH Championships, and there has been some concern about finding access to an indoor ring and a jump chute in order to practice.

Susan Graham-White, chair of the Future Event Horse Committee, said if owners don’t have the facilities or are in an area that does not have a lot of indoors, people are going to have to seek out professionals in the region who can help. “It’s the reality of the situation. The horse will have to be prepared,” she said.

Susan suggested contacting breed associations and finding out where they hold inspections in your area, as those locations are almost guaranteed to have a set up for free jumping. However, Susan pointed out that the East Coast FEH Championships will have a schooling day the day before so that owners can bring their 3-year-olds to familiarize them with the facility and practice going through the jump chute.

Susan said that even if you don’t have a horse that has potential to go to the four-star level but would make a great amateur or junior horse, getting the horse out to YEH/FEH competitions is still a good way to not only get experience for the horse but also to get your name out there as a breeder. She also said that the committee is encouraging all event organizers to show as many details as possible for each horse, including breeder and bloodlines, in event programs.

Robin said he wished someone had been recording during David O’Connor’s discussion about the upward pathway from young horse to team horse so that everyone could hear what he had to say.

“We need to make sure they get into the right hands,” Robin said. “Pressure from you guys as breeders to come through and develop that would be well received by me. We need to be producers as well as competitors.”

Many of the horses that do well in the FEH and YEH competitions will probably make it to the upper levels, but how long they stay there will be “determined by who is riding them and how well they are cared for,” Robin said.

“It’s not a comfortable discussion, but we need to have it. I’ve never met a horse that didn’t need to be taken care of, either mentally or physically, at some point.”

What are your thoughts, EN? What would you like to see in the development of the YEH and FEH programs?