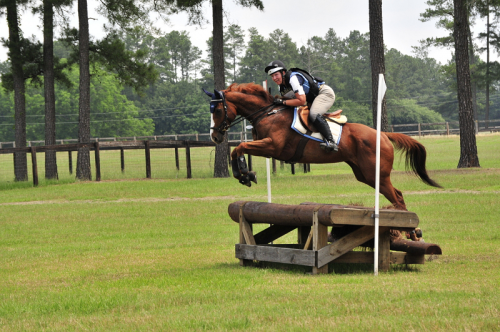 PrettyHippHopHotty competing in her first Novice at the Carolina Horse Park. Photo by High Time Photography

Unfortunately, with horses, things don’t always go as planned.  As I’ve been talking about in my previous blogs, Sexy’s feet just haven’t been holding up well to life off the track.  She has been out of work more than she has been in work, and I keep trying to figure out a way to get her back in the game.  However, I think that what is best for Sexy is some time off to just allow her feet to grow and get stronger.  We are doing everything we can to help her feet, but as all horse people know, with hooves, you just have to wait.  I just don’t feel comfortable pushing her because I’m under the clock.

I have spoken with Steuart about my concerns, and he has decided to break the rules in my case.  There are only 34 days left before the big Symposium, which doesn’t really give me much time to get a new horse and give them the down time they need before starting work.  In light of this, I am going to be bringing my horse,PrettyHippHopHotty, as my Makeover horse.  I have had her for about a year, but she has only been in real work for about 10 months.  This will give people a chance to see how an OTTB might progress after a bit more time in retraining. 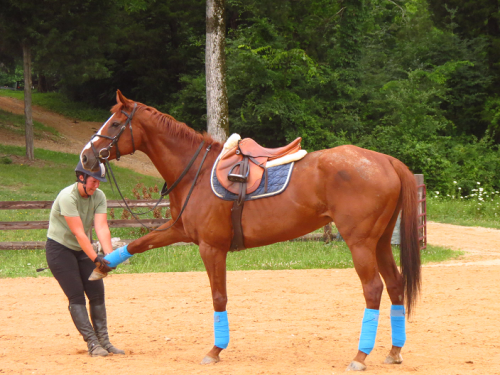 Hotty stretching before a lesson. She has such presence.

PrettyHippHopHotty, lovingly known as Hotty, (I know, how do I find the mares with the fun names?) is a 2007 TB mare by Bowman’s Band out of She’s Pretty Too who is by Housebuster.  She is a 16.3 chestnut mare with a blaze and a right hind coronet.  She is a big mare with a lot of presence and a kind eye.  I am absolutely in love with her!  She reminds me a lot of Win the War (my Advanced event horse) in body style and intelligence.  She has a bit of diva attitude, but we have learned to communicate on the same wavelength.

I have a good relationship with Jodie Pointer of Cabin Creek TB Rescue.  I went to her place one day to pick up a resale project.  As I was walking down the aisle, this big beautiful redhead with a blaze stuck her head out of her stall.  It was love at first sight!  I immediately asked Jodie about her, and she told me her story.  Hotty had been having some foot soreness issues when she would run, so she was there for some time off.  A week or so later, Jodie called me with the news that the owners had decided that Hotty could come to me after one more race.  I was thrilled!

A month or so later, I went to pick up my new girl.  It turns out that the owners decided not to risk running her again when they had finally gotten her sound.  I was beyond elated. 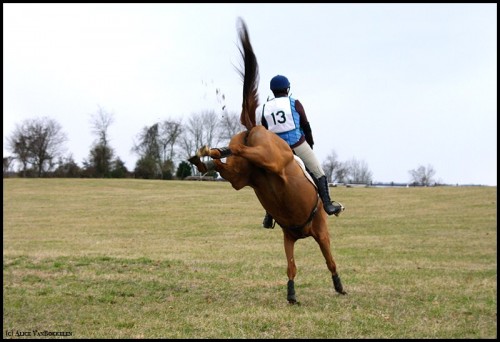 Hanging on for the 8 second ride when she first started jumping. Photo by Alice VanBokkelen.

Due to Hotty’s feet issues and things going on in life, I turned her out for about 3 months or so before she started working.  She had a lot of tightness issues in her body from racing.  She carried herself very stiffly and was not a fan of much leg or connection.  She was afraid to walk over poles on the ground, much less think about jumping anything. Once she finally figured out how to jump over things, she would land and give me 8 seconds of fun on the landing side. 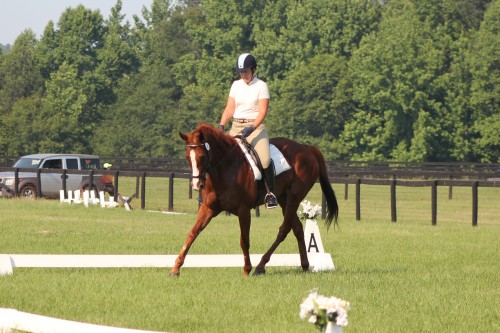 Hotty in the dressage at Full Gallop Farm. Photo by Jan Taylor.

With a lot of patience and a good bodywork person (Kathryn Schiess of The Perfect Ride Equine Bodywork), Hotty is finally coming into her own.  Her movement has improvement ten fold, and her jump just keeps getting better and better.  She is successfully competing at the Novice level with big hopes to be going Training by the end of the season.

So, with just over 30 days left in the Makeover, I will post pictures and video of Hotty’s progress.

Here are some videos of her from the past few months: