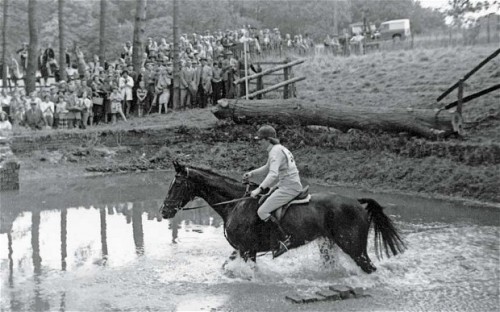 Anneli Drummond-Hay and Merely a Monarch, 1961

It’s officially Burghley Fever season, and horse people aren’t the only ones with the bug. Over the weekend the Telegraph published an article written by Anneli Drummond-Hay, who won Burghley way back in 1961 when the prize money amounted to £100. She originally entered her six-year-old mount Merely a Monarch without any intention of actually running him around the track, but when her more experienced mount “fell by the wayside” she went ahead and rode him. She goes on to describe how Burghley cross country was the first time she had ever jumped the horse into water (!!!) but she still managed to finish clear and in first place. Click to read her full diary, and stay tuned to EN for much more Burghley coverage in the coming days. [The Telegraph]

Burghley Links: [Ways and Means to Stay Connected to Coverage] [Top 10 Reasons to be Excited for Burghley]

Defending Burghley Champion Andrew Nicholson is heading the Kiwi assault this weekend. He will field three horses: Nereo, Calico Joe, and last year’s Burghley winner Avebury. If he wins this year, it will be his fourth Burghley title and the honor of being the only Kiwi rider to win back-to-back titles since Sir Mark Todd did so in ’90 and ’91. [Yahoo Sport New Zealand]

Over 150,000 visitors are expected to flock to the Burghley show grounds this weekend.  The event regularly attracts large crowds, which will come this year to watch 86 combinations from 11 different nations contest the famous track. [Bourne Local]

Thanks to H.E. “Tex” Sutton Forwarding Company, there is a new travel grant available to riders who wish to compete in one of the four CCI3* competitions that are on the PRO Tour Series calendar. Tex Sutton is the famed air transport company that flies horses domestically (and performed the much-covered flights to Rebecca Farm from the East Coast in past years). The four CCIs that are part of the tour are Jersey Fresh and Bromont in the spring, and Fair Hill International and Galway Downs in the fall. PRO riders will be able to apply for the grant, as well as a discounted equine airfare that is available to all PRO riders from Tex Sutton. [PRO]

The 2020 Olympic host city will be decided this week as the IOC convenes for its annual general meeting in Buenos Aires, Argentina. The three finalists are Istanbul, Tokyo, and Madrid. The IOC also visited the Rio venues last week, and announced that there has been definite progress since its last checkup. Even so, a large amount of work remains to be done and timelines remain tight. [Horsetalk]