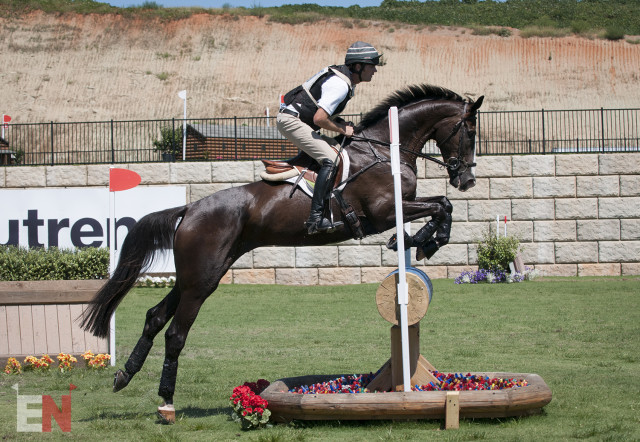 Beating the clock was the name of the game on today’s Adequan Advanced Gold Cup Finals cross country course. And while nobody managed to get out in front of it, those who came within striking distance were rewarded with big moves up the leaderboard.

We knew the time was going to be tight but we didn’t know how tight, being an untested track, which put the first few riders out on course at a disadvantage as they trailblazed around for the rest of the field. Dressage leaders Allison Springer with Arthur were third out and looked super but 17.2 time sadly knocked them down the scoreboard into 9th. 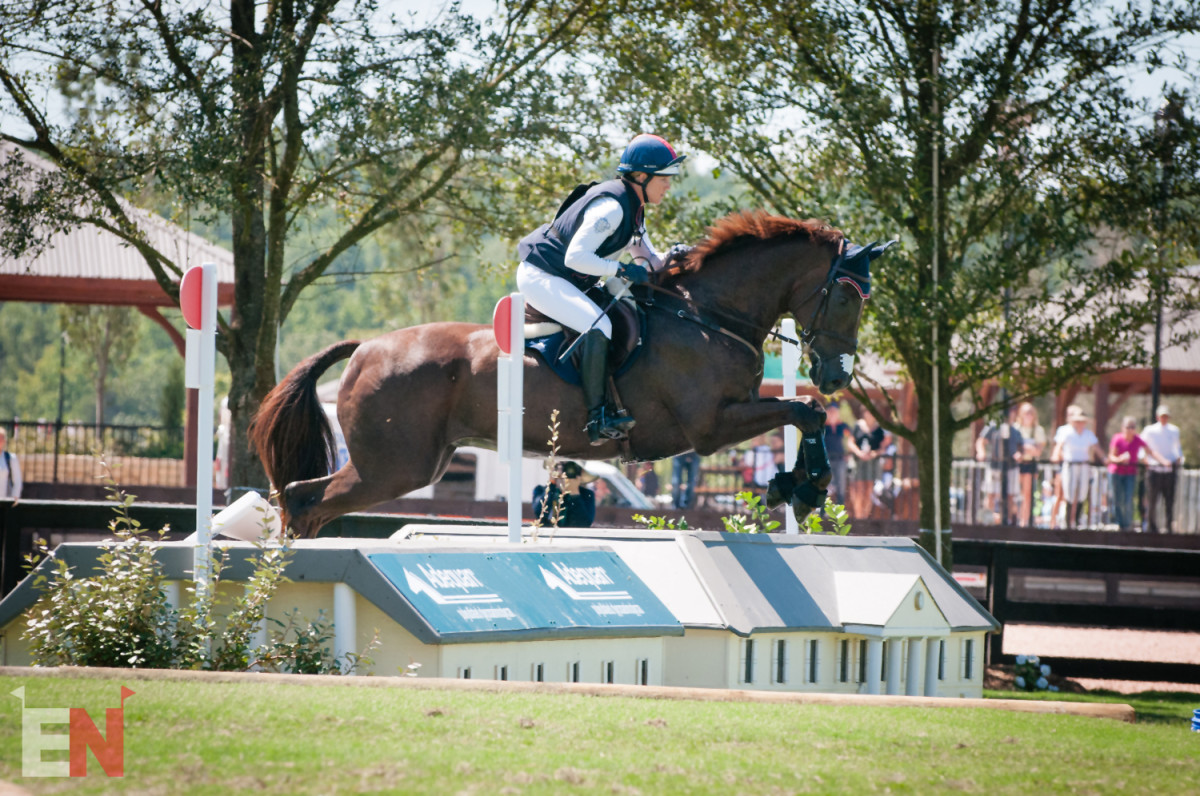 That left the door wide open for second-placed Ryan Wood and Powell to take the lead, and a clear round with 8.8 time penalties was good enough to seal the deal. Powell was one of four clear Advanced rounds Ryan delivered today, including a 6 time fault round on Woodstock Bennett that launched him from 16th to fourth.

“The fastest of my rides was Bennett, my first ride out there,” Ryan said. “He’s probably the fastest horse in the stable.”

Ryan says he didn’t necessarily set out to go under the time, and considering they still posted the second fastest time in the division there’s no telling how really putting his foot to the floor might have impacted the outcome — or not. Making time on today’s course may have just been an impossible task.

“It was a tough course to get it with, between the terrain and the turns and you’ve got to take into consideration balancing before fences and there are a lot of rollbacks and combinations, so you’re not traveling at 570 meters per minute.” 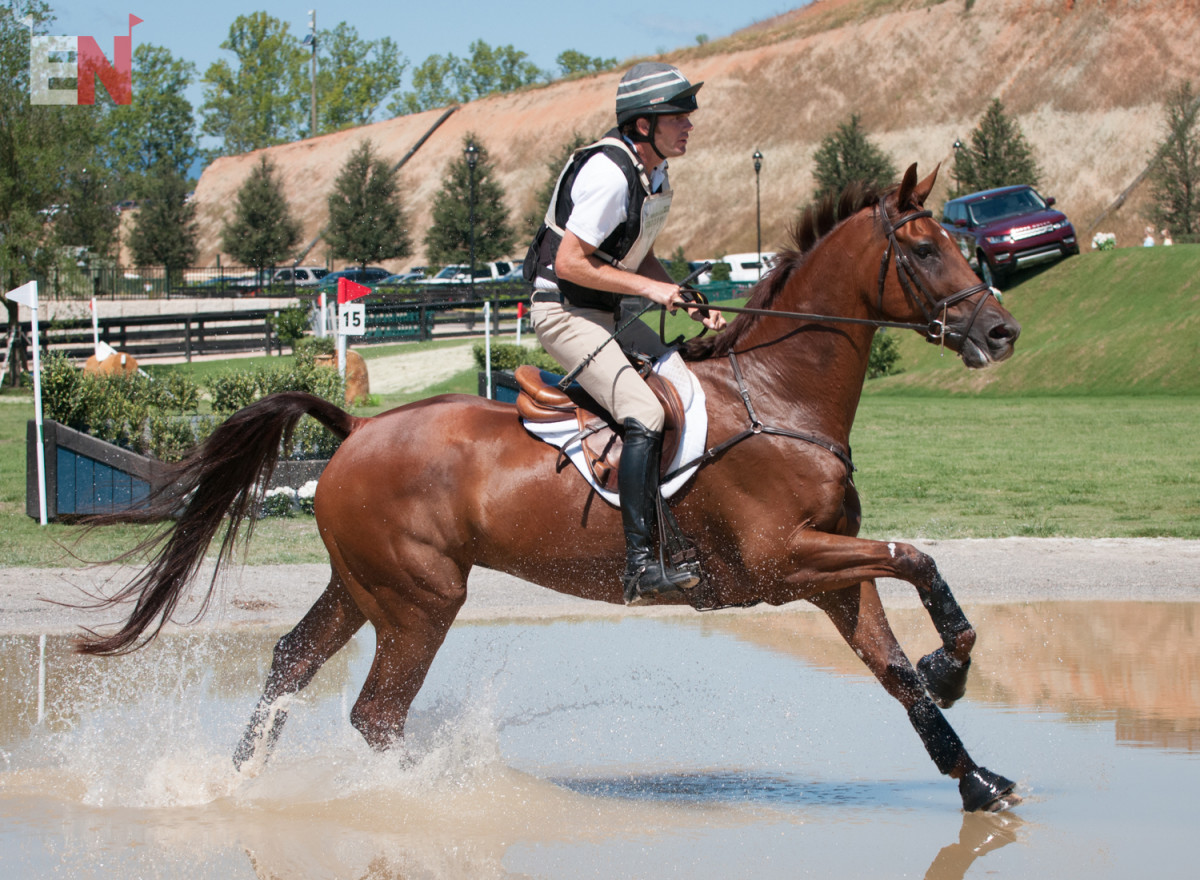 Doug Payne and Vandiver turned in a 6 time penalty trip as well to make a big jump up from 10th to second. 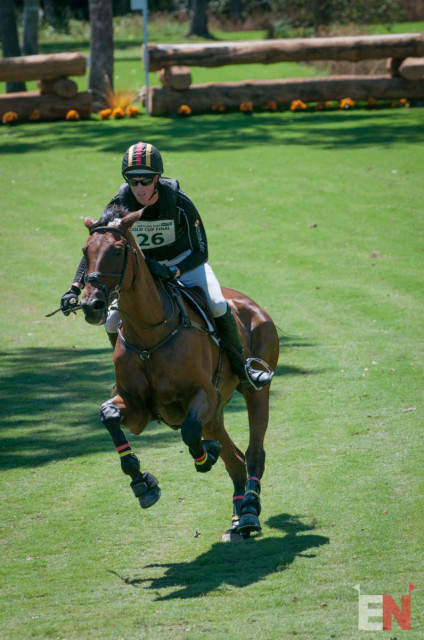 The only rider faster than Ryan and Doug was Sydney Elliot, who collected just 4.8 time to move from 24th to 6th place. 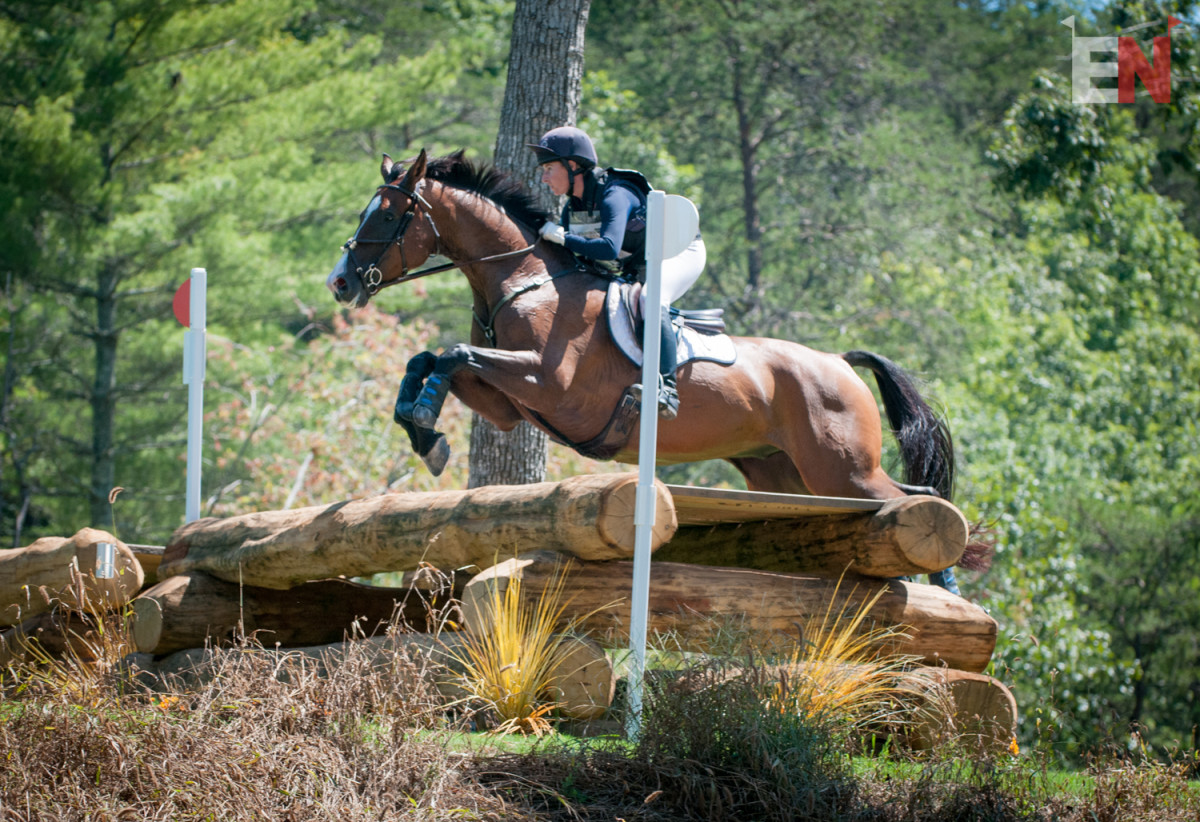 Sydney Elliott and Cisko A. Photo by Leslie Threlkeld.

Emily Beshear and Shame on the Moon round out the top three, picking up 9.6 time: 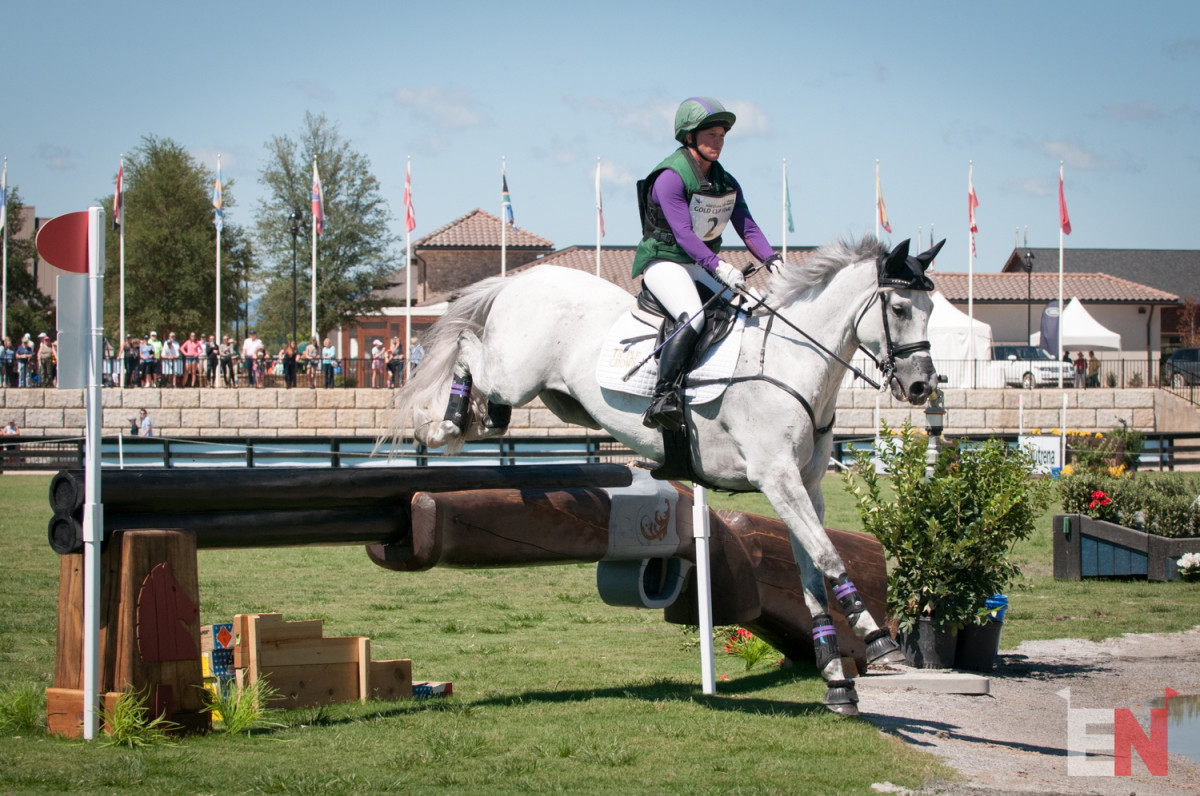 Emily Beshear and Shame On the Moon. Photo by Leslie Threlkeld.

Marilyn Little and RF Demeter, who were third after dressage, had their chances of moving up dashed when they missed fence #21. It was an easy breather fence between the water and the two back-to-back corner combinations — we can see how it might slip the mind.

Misfortunes were few and far between. Courtney Cooper and Who’s a Star had a stop at #5, the stump skinny, then was eliminated after running into trouble at #13, the corner-skinny-corner triple, then #15b, a hedge skinny. Lillian Heard fell from Arundel at #5 but walked off the course, looking a bit sore but OK. Kirsten Buffamoyer had a runout at #15b as well, Kim Severson and Cooley Cross Border had a stop at the entry to the second water at #20. Jessica Bortner-Harris and Win the War picked up 20 at #4B, the angled tables, then retired after a runout at #15. 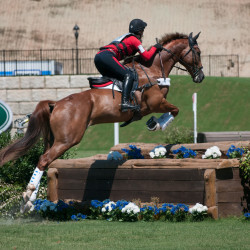 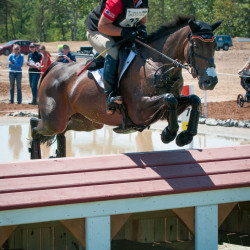 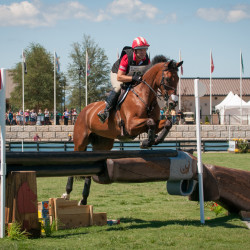 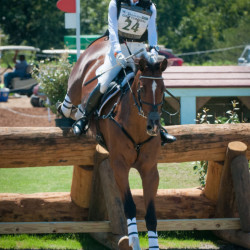 Some video clips we collected from around the course: 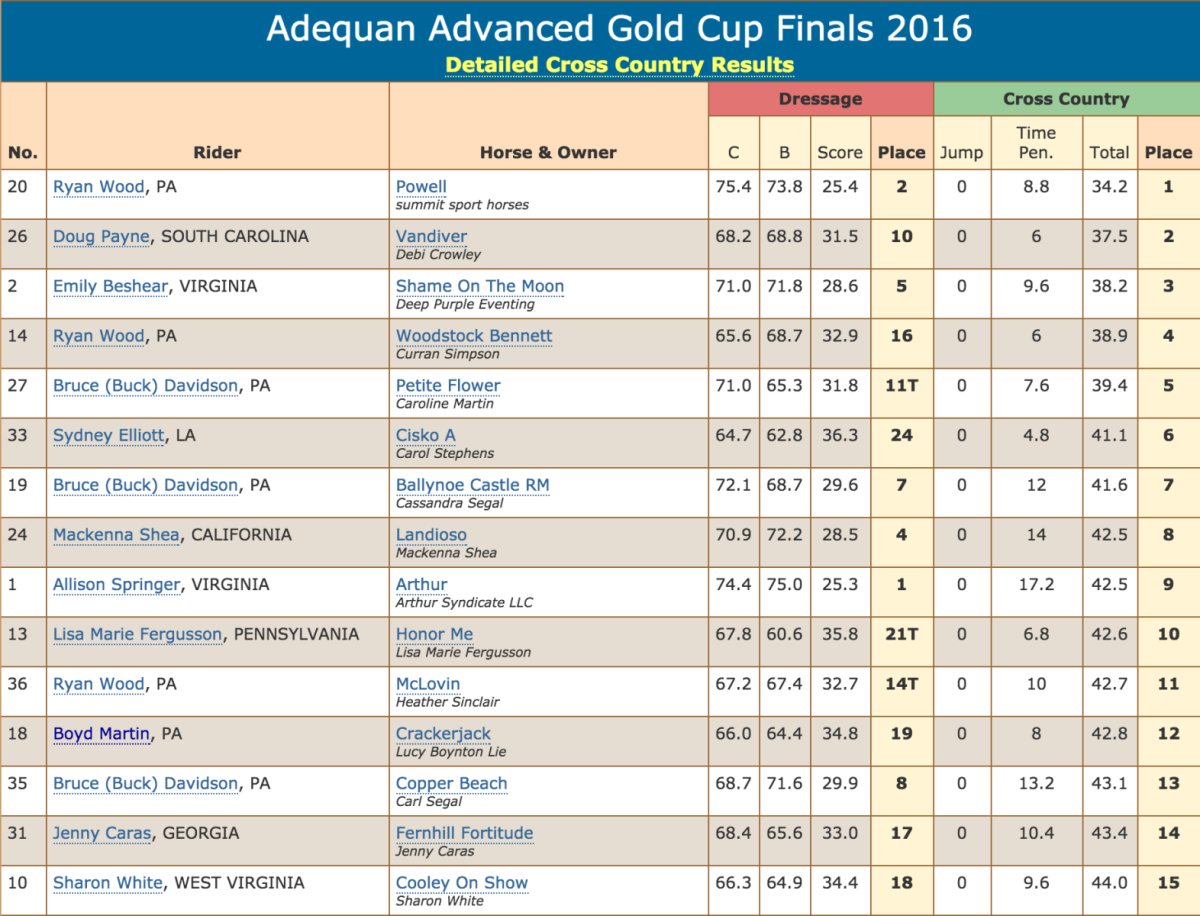