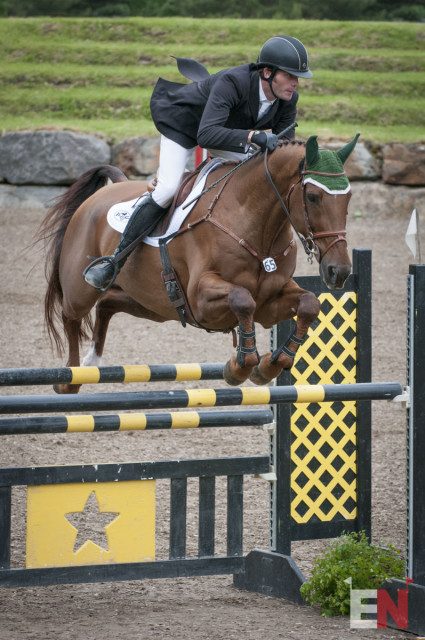 Ryan Wood dominated the three-star divisions at the Jaguar Land Rover Bromont CCI, winning the CIC3* with Frankie and then returning to the ring to win the CCI3* Todd Sandler Challenge with Woodstock Bennett. On a day when rails were flying, Ryan jumped double clear on both of his horses. He was in the hot seat with Frankie, coming into the ring in the lead without a rail in hand. Bennett moved up in the standings when overnight leader Kylie Lyman dropped a single rail with Lup the Loop.

“It’s pretty awesome to win a three-star and to win both of them is, well, I’m speechless!” Ryan said.  “I’m excited and grateful to have the opportunity I’ve had to compete these horses and bring them through the levels with amazing owners and supporters.”

He thanked his mentor and friend Phillip Dutton as well as Dom Schramm and Boyd Martin, two Australian-born riders who were also winners today.

“He was jumping out of his skin,” Ryan said of his and Curran Simpson’s Bennett, a grandson of the world famous show jumper Darco. “He’s such a good boy. He’s not the fanciest mover. He’s not exuberant in any phase but he’s just a workman. You can go out and get the best out of him and he wants to do the right thing. I think that’s 90% of it.”

After winning the CCI3* with Powell at Jersey Fresh and with another two wins on two different horses today, Ryan is surely on the radar for the Australian Olympic Team. Ryan is looking also to take Bennett–who has just been syndicated with eight additional shares available–overseas to the Boekelo CCI3*. 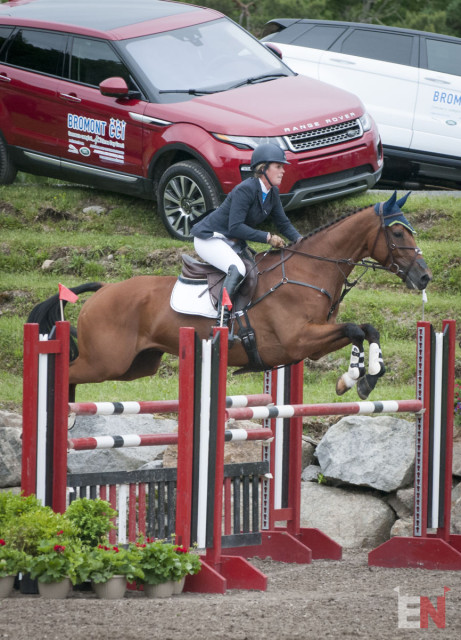 Three-star first timer Kylie Lyman was first and third after yesterday’s cross country. First in the ring for the CCI3*, she jumped a clear round with Cristin O’Hara’s Sacramento to ensure a third place finish at least. Joan Nichol’s Lup the Loop was the last to jump under pressure and ultimately finished second after dropping one rail.

“(‘Loopy’) was just a little tired today. He’s only eight and hasn’t been at it very long. Neither have I!” Kylie said. “I don’t think I could have dreamed for a better first three-star that’s for sure. They were both pretty incredible.”

Kylie said she didn’t want to get ahead of herself and so hadn’t made any long term plans for the horses past Bromont. “I just want to enjoy today and this weekend and move on from there!”

Rachel McDonough is the top placed Canadian in the CCI3* with her own Irish Rhythm, moving all the way up from 15th after dressage to fourth with a double clear cross country round, coming in right on the optimum time of 10 minutes. Today they added only 1 time penalty in show jumping to finish on 59.3.

“He gave me everything that he could and he was trying to keep every rail up. We got in a tight spot in the triple but he has springs hidden under his feet,” Rachel said.

She purchased “Oliver” off the track when he was 7 years old and she was just 13. Together they’ve competed at both the one- and two-star North American Junior and Young Rider Championships, completed five CCI3* and finished 25th at Rolex Kentucky in 2014. Rachel is not ruling out Rio this summer but has her sights set also on a fall four-star overseas.

“He’s really experienced now and he’s 17 so it’s time to go,” she said. “He’s my best friend. People come and go but he’s always there so he’s really special to me.” 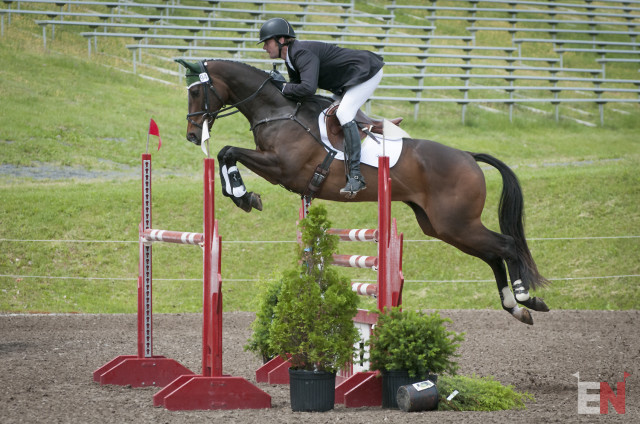 Ryan and his and Steven and Karri Guys’ Frankie had no room for error when they entered the ring today for the CIC3* show jumping finale. They rubbed a few fences, and the back rail on one oxer came out of the cups and luckily fell back perfectly in place. A clear round secured the win for Ryan and the little Thoroughbred he purchased for $500 and some free jump lessons.

“He breathed on a couple! He was trying really hard. He felt really good in the warm up and I just had to ride him accurately and he’d do the rest,” Ryan said. “He’s just a champion. He wants to win and he wants to please. I’ve got great owners. Steven and Karri believed in us and backed us all the way.”

Ryan takes his time producing his horses, spending a significant amount of time at Intermediate before moving them up. The patience has paid off with a win for Frankie and a victory for Bennett in his first CCI3* attempt.

“For me there’s no point in showing up to a big event if you don’t have a shot at getting in the top places. I just spent the time at the levels that I needed to stay at until we’re ready to move up. It’s all sort of falling into place.” 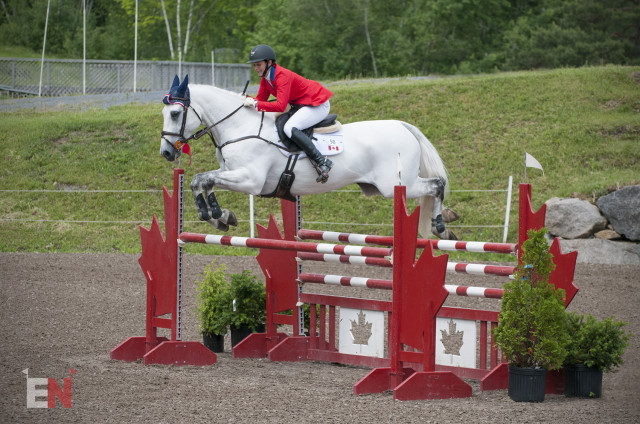 Colleen Loach and Peter Barry’s Qorry Blue D’Argouges finished second in the CIC3* thanks to a double clear effort today, and as the top placed Canadians they are the winners of the inaugural $6,500 Stuart R. Horne Canadian Eventing Championship.

“I’m so happy with my horse. I couldn’t have asked better from him,” she said. “I hope to be selected for the Olympics. It’s been a lifelong dream of mine. We’re pretty close so we’ll see. It’s going to be a long week waiting.”

Rounding out the top three in the CIC3* is Hannah Sue Burnett and Jacqueline Mars’ Cooley Dream, who jumped double clear to maintain their position after cross country.

Waylon Roberts was the winner of the $2,500 Horne Training Grant as the 2015 Canadian International High Point Eventing Athlete, presented by Bridget Colman in honor of her father Stuart.

The rain certainly didn’t dampen anyone’s spirits these last several days! Thank you so much to the Bromont staff for putting on such a brilliant competition. Your hospitality, enthusiasm and kindness is unparalleled and we are all so appreciative. 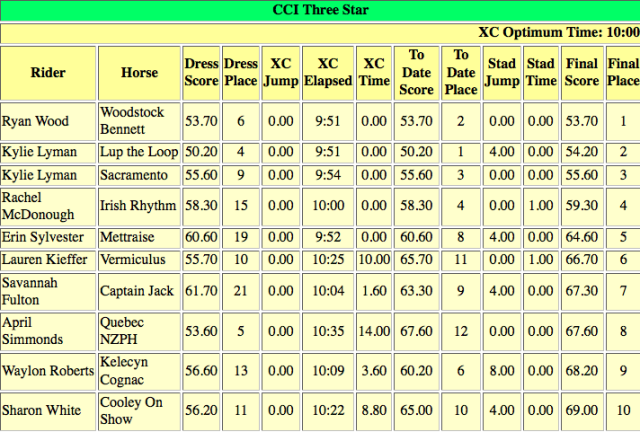 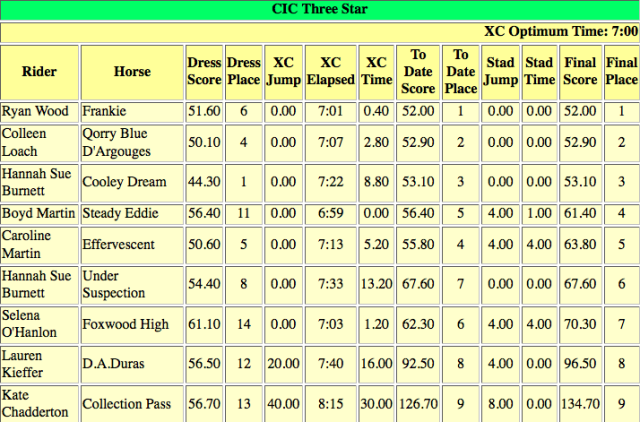