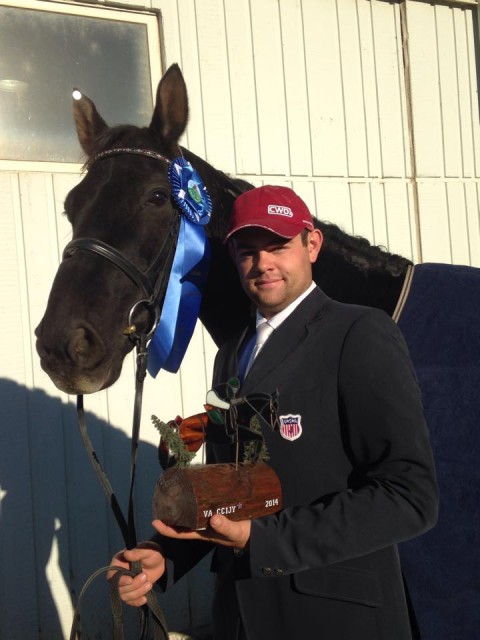 Nicholas Hansen and Will Smith with their winnings. Photo via Nicholas on Facebook.

The CCI* at Virginia Horse Trials has wrapped up, and it was Ryan Wood and Nicholas Hansen who took home the wins in the two divisions. Ryan and Powell held onto their overnight lead with a double clear stadium round in the spooky Coliseum today to clinch the win.

Many riders often comment on the unique factor of having the show jumping indoors at this event. As eventers, we’re used to being outside in the elements for all three phases, so coming inside is always a change. Rails fell frequently in the CCI* divisions, with just three out of 35 jumping clear with no time in the CCI* and two out of 10 jumping double clear in the junior CCI*.

Ariel Grald and GHF Jonah picked up second place in the CCI*, steadily moving up from 10th after dressage to sixth after cross country. You can view this pair’s quick and clean cross country, courtesy of The Horse Pesterer, below:

Nicholas Hansen has his eye on an Intermediate move-up this winter after picking up the win in the junior CCI* aboard Will Smith. Nicholas posted on his Facebook page that Will was “foot-perfect” through the whole weekend, and it looks like this pair is heading to Florida to work on the skills needed to make the step up a level.

Ema Klugman and Bendigo had the other double clear round of this division to move up from fifth to take second place. Annelise Aurillo and Peace Proposal had two rails down to finish their weekend in third place.

The junior CCI* division was significantly pared down after cross country, with seven pairs failing to complete and one withdrawing before show jumping.

Michael Pollard and Halimey returned to their winning ways at Rocking Horse this weekend, picking up first place in the Open Intermediate division. After retiring on cross country at Fair Hill, Michael re-routed the Trakehner stallion here and likely picked up some more confidence for this horse with two clear jumping efforts.