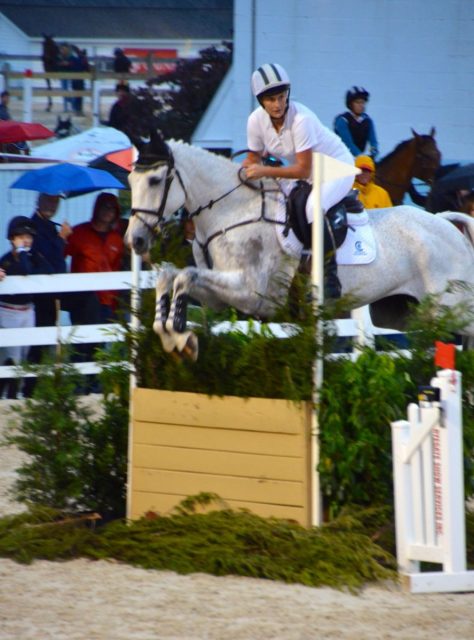 It was a thrilling night of eventing at the legendary Dixon Oval at the Devon Horse Show tonight, where 24 eventers and one hunter/jumper rider came to show off their chops in the first ever Arena Eventing Class. The field competed for the $50,000 in prize money, and the crowd was treated to a tight competition right down to the proverbial wire. It was Sara Kozumplik Murphy and Rubens D’Ysieux who stole the show — and more than a few hearts — by the time the victory gallop commenced!

The competition was held in two rounds, the first to determine clear rounds that would move forward to the jump-off. The 12 best scores from the first round would eventually move on to the jump-off, and just seven pairs managed double clear rounds. This opened the door for some of the pairs that had time and/or a rail down to move forward, which was a relief for the many who had the bogey fence of the night, an oxer as the final fence of the course, down.

We were thrilled to see Shiraz back out with Colleen Rutledge for the first time since Rolex in 2015. At 19 years young, “Luke” looked full of spring and ecstatic to be out showing off again. These two had one rail down and some time to come tantalizingly close to making the jump-off, but a late rally from Jennie Brannigan and Cambalda as the last to see knocked them out of contention for round two. 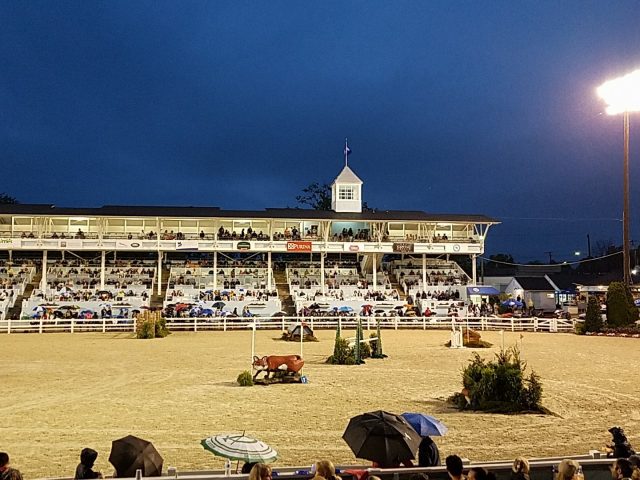 The Dixon Oval ready for some eventing! Photo via Eric Bull on Twitter.

Just one pair was eliminated on the night: Douglas King and Zeno, who forayed into this class from the hunter/jumper world. They were eliminated with two refusals on course. Aside from that, runouts were few and far between, with just the last fence on course really causing consistent trouble.

All eyes were on Canadian Waylon Roberts and his first ride, Lancaster, in the jump-off — he successfully qualified all three of his horses for the second round — and he put in an accurate if not especially daring round for a final time of 82.69 to set the bar for the finale. 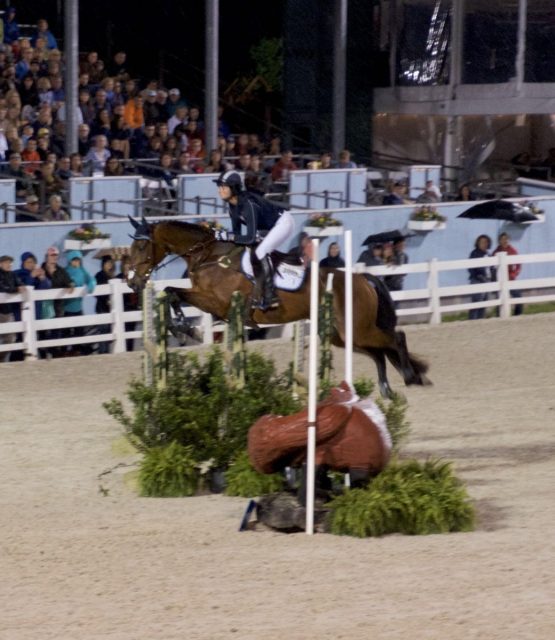 It took some time for clear rounds to come in the jump-off. Great Britain’s Justine Dutton moved forward with one horse, Jak My Style, to round two and had a brilliant go round, bolding galloping to the final fence to set up for a good distance, but the pesky front rail came down at the last moment.

It wasn’t until Sara Kozumplik Murphy and Rubens D’Ysieux, a 12-year-old Selle Francais gelding, took the stage that the crowd held its collective breath — we all knew this pair had wings, could they go fast and clear? These two are more than capable of winning at speed, under pressure, in a big atmosphere: case in point, the Ocala Horse Properties Eventing Prix Invitational earlier this year.

Indeed they did, sailing over each question while slicing their turns precisely to shave off as many seconds as possible. In true unicorn fashion, Sara and Rubens D’Ysieux sailed home in a time of 75.03 to take a handy lead over Waylon and Lancaster. Sara reached into her pocked to give Rubens his typical post-round treat, and the crowd went wild.

Many tried to come up to challenge Sara’s lead, the closest of which would be Jennie Brannigan and Cambalda, who were the last to go and came home in 79.05 to finish in second place. Jennie, our resident adrenaline junkie, certainly knows a thing or two about speed and did everything she could to get close to Sara’s time.

Finishing third after a gritty run are Erika Nesler and Right Above It, who pricked his ears and held his line no matter what, rewarding Erika with a fast and clear round in a time of 80.92 that was good for the podium. The smile on Erika’s face was perhaps the biggest of the night.

Waylon Roberts and Lancaster, the only other pair to produce a double clear round in the jump-off, ended the night in fourth place. Doug Payne and Flagmount’s Mischief complete the top five after having a heartbreaking rail at the triple bar oxer to mar an otherside speedy and neat round. Doug is well known for making daring choices in high pressure situations, and certainly he would have been one to challenge Sara were it not for an unlucky rail. 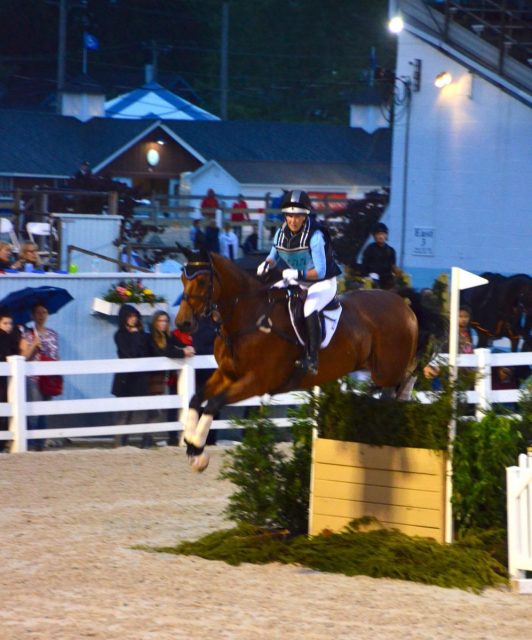 Erika Nesler and Right Above It. Photo by Lisa Thomas.

Capt. Mark Phillips course presented many challenges to both horse and rider, but each pair looked well prepared and fit to the task at hand. Capt. Mark designed the course to be tight and demanding of accuracy in the main oval, and then allowed riders to head into the adjacent Gold Ring.

In the Gold Ring, jumps were set on a loop that really encouraged forward and bold riding, giving the riders a chance to open up their horses’ strides more. From there, they returned to the Dixon Oval to tackle more related distances and turning questions. Riders who focused on maintaining a forward and steady rhythm were rewarded with tidy and safe rounds.

In all, this was a great display of Arena Eventing, so our hats are off to Capt. Mark, Eric Bull, and the many organizers and officials who brought this fledgling idea to life.

The biggest thing we learned tonight? Don’t bet against a girl and her unicorn. Many congratulations to Sara and Rubens D’Ysieux, and we can’t wait to see this event return to next year’s edition of the Devon Horse Show.

Here are your final top 12 at the end of a very fun night of Arena Eventing. The full scoring list can be found here. 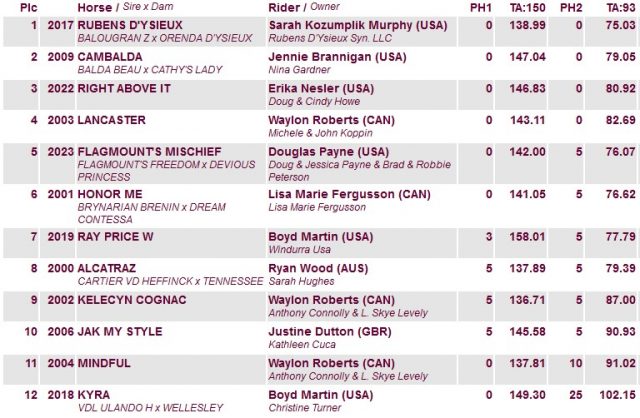