Here at EN, we know that a big part of the heart and soul of this sport lies with local amateur eventers. That’s why we’re featuring awesome local eventing organizations and events that are recognizing and celebrating low-level eventers in our Schooling Horse Trials Spotlight series. Know of a great local organization or schooling horse trials that deserves some love? Tip us. 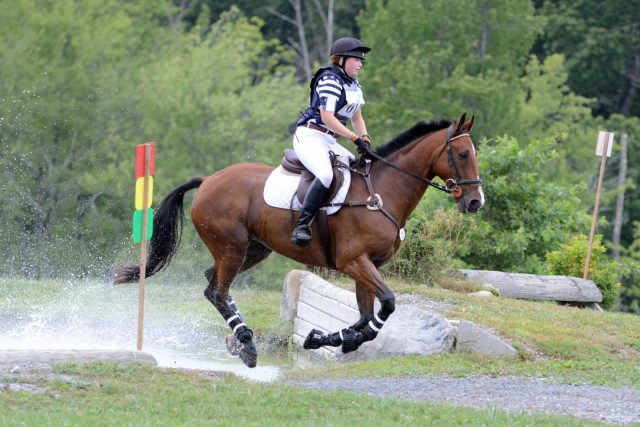 Seven years ago, Alison Eastman-Lawler of Apple Tree Farm in Hollis, New Hampshire and Meredith Scarlet of Scarlet Hill Farm in Groton, Massachusetts joined forces to create the Scarlet Apple Horse Trials, now one of the best-loved schooling events in Area 1. Born out of a desire to help fellow eventers in need, the event still thrives today.

In 2011, the Green Mountain Horse Association and Huntington Farm which both host USEA events were forced to cancel their fall events after Hurricane Irene passed through. The storm washed out roads across the state of Vermont and both events would need to undergo costly rebuilds.

As eventers generally do, people and organizations across New England poured out support with their money and their time to help these two venues rebuild. Prior to the creation of the horse trials, Alison used to host a two-phase at a student’s farm in New Hampshire while Meredith ran a cross country derby at her farm in Massachusetts. It was at this time that Alison and Meredith thought to combine their two shows to create a three-phase event to serve two purposes: to offer competitors a substitute show to compete at in lieu of the canceled events and also to fundraise to help their efforts to rebuild.

The event was a hit and years later the Scarlet Apple Horse Trials are still going strong, often filling and maintaining a waitlist. The event now funds both Alison and Meredith’s respective businesses, but the elements of camaraderie and joy for the sport remain.

“We said, hey this was popular, it went really well, and we worked well together, so we kept it going,” Alison recounted. 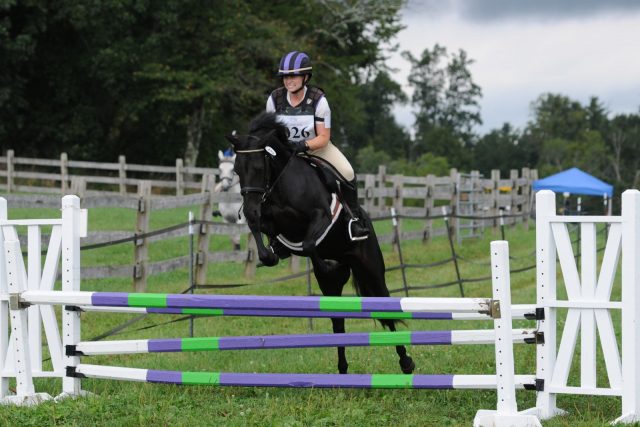 The event is a great avenue to get young eventers started in the sport and to get already active competitors additional competition experience or practice at a new level. The show offers a ‘Tadpole’ level two-phase while the three-phase offers divisions from Elementary through Preliminary/Training. The Elementary cross country has a unique element on course: a mandatory halt, which acts as a test of control for the riders and horses just getting started in eventing.

Alison thoroughly enjoys organizing the event and performs the secretarial duties: promoting the event, soliciting sponsors and prizes, hiring the judges, as well as designing the show jumping course. Meredith takes care of the all the aspects relating to cross country including setting up the course, mowing, decorating, and even building some of the jumps. Alison calls the event a well-oiled machine; being so well-versed in their own duties, the two are able to run the event like clockwork with minimal communication,

“I’ve always loved being an organizer,” said Alison. “I’ve always wished I’d be able to have the facilities to run a sanctioned event, but I don’t. This is closest I’ve gotten.”

Though there isn’t enough available space at the farm to accommodate a recognized event, Alison and Meredith still try to simulate the experience as closely as possible while still creating an environment where all competitors can have a positive learning experience at the end of the day.

The environment is relaxed — coats are always waived and braiding is not required — but the judging and elements on course are what one would expect at a rated event. Though the course length is truncated, a wide variety of fence types and questions are packed into the small space offering challenge and practice. Though competitors may be riding their dressage tests in neat schooling attire, they’re still riding in front of (r) judges who are hand-picked by Alison to foster the positive learning environment she seeks to create.

“It’s important to me to have good judges that are encouraging and give positive feedback,” Alison said. “The ones I pick don’t sugarcoat the test, they are going to give you a realistic score, but are still positive in their remarks.”

Stadium and cross country courses are not timed, and though the courses are run in accordance with USEA rules concerning the number of refusals allowed constituting elimination, Meredith doesn’t kick people off the course if they reach the limit unless it’s a safety concern. If a rider is having particular trouble, she’ll send their coach out on the course to help them work through it.

Alison and Meredith have picked unusual dates for their biannual event — the first Wednesday in July and the Monday of Labor Day in September. Both women are active competitors in Area 1 during the summer and wanted to avoid conflict with any sanctioned events on the weekend.

“We’ve had good success with the days we’ve picked and we realize not everybody is available, but many are,” explained Alison. 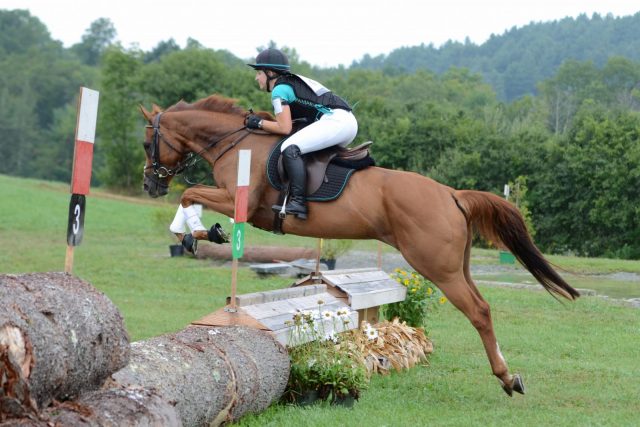 Alison sees schooling horse trials to be a huge benefit to the long term health of eventing as a way to introduce new people to the sport in a positive and encouraging way. In particular, she finds the cost to be a big hurdle in getting kids started in the sport.

“I totally understand why the events have to be so expensive, but it’s hard to send a kid to their first event when it costs so much,” said Alison. “For a kid without their own horse they’re going to pay a fee for that plus trailering, coaching, and the entry. It adds up quickly and can be very off-putting. The lower cost of the schooling shows helps get them into it, then once they get hooked we encourage them to move into the sanctioned world.

“We want to provide a really good, fun, educational event with the Scarlet Apple Horse Trials so everybody walks away feeling good about what they did, having had a positive experience with the sport of eventing, and wanting to come back,” Alison explained.

Special thanks to Don and Marina Macintosh of TurtlesWay, who photographed the horse trials prior to 2014, for the lovely images!