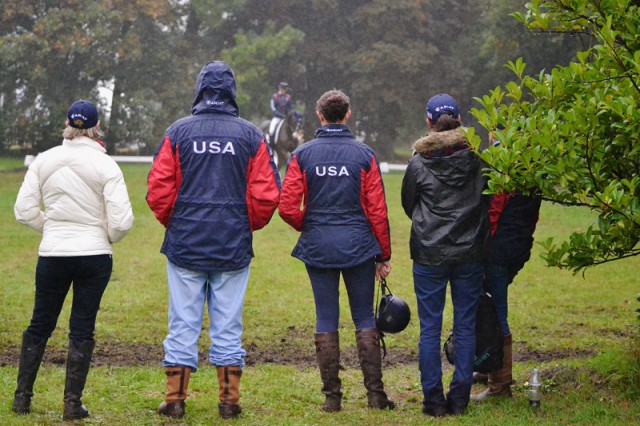 A championship year means higher stakes, especially for the USEF Eventing Selection Committee. And with one year of experience under their belts, the selectors — Chair Bobby Costello; Marcia Kulak; Derek DiGrazia; Deborah Furnas, who this year replaces Kim Severson; and substitute Phyllis Dawson — are preparing to take on their biggest challenge yet: choosing a team for the World Equestrian Games in Normandy.

The new Selection Committee has been in place since the 2012 USEA Annual Meeting. The USEF High Performance Committee — in conjunction with new coach David O’Connor — considered recommendations from the Eventing Eligible Athletes Committee, and a new group of selectors was formed. With that in mind, it seemed appropriate for Bobby to sit down at the 2013 USEA Annual Meeting to evaluate the committee’s first year on the job.

“The High Performance Committee made a point this year to send as many riders overseas as possible to get experience,” Bobby said. “There was a heck of a lot of selecting going on, so it was a very busy year with a lot of work and studying. A lot of thought when into this year, and it turned out very well, I believe. We were a new committee, so we needed to get our feet wet fast. It was a good year to do that with it not being a championship year but there still being a lot of other big decisions.”

Bobby meant it when he said the new Selection Committee got its feet wet fast, as the selectors picked their first list — the 2013 USEF Spring Training List — just four days after the committee was formed. “We took some time beforehand to talk about our philosophy and our perception of what it meant to be a selector,” Bobby said. “One thing we decided from the very beginning is we wanted to be as consistent as possible in how we put these lists together.”

All Roads Lead to Rolex

The selectors will look to maintain that philosophy of consistency when they begin the process of selecting the team for the World Equestrian Games. And while the committee’s official work won’t begin until Rolex — the first selection trial for the Games — Bobby said it’s still going to be a busy spring. “We’re all in the sport; we’re all competitors, trainers and coaches; and we’re all a highly observant group of people,” Bobby said.

“The riders will be observed all spring long, but no definitive judgments will be made during the winter/spring preparatory events. For a big majority of the riders and horses, it’s really what happens at Rolex that’s going to matter. There’s no getting around that — for U.S.-based athletes, Rolex is the event that will matter for most of these horses and riders. For a few different reasons, some will re-route to Jersey and Bromont, but everyone knows that Rolex is critical. Riders based in Europe will be just as closely observed during the lead up to and then including Badminton and Luhmühlen — those being the two major selection trials over there,” Bobby said.

As for what the selectors will be looking for at Rolex, Bobby said it all comes back to consistency. “For the riders who have showed good form, we want to see consistency with that form. For the riders who maybe didn’t have the last half of the season they wanted or needed, we’ll be hoping they can show us their best at the spring selection trials.”

While only one or two selectors typically go to events, the entire Selection Committee will be at Rolex, as it’s the biggest national competition where the selectors have a chance to see the most riders at one venue. “Sometimes there will be a few of us sitting together, but we don’t sit together necessarily,” Bobby said. “On cross-country say, I like to personally be out on the course near one of the giant screens so I can see as much as possible. I like to see how a horse is galloping and hear how it’s breathing, in addition to other factors.”

Criticism Comes With the Territory

The selectors will name the WEG short list following the final selection trial at Luhmühlen, no later than June 20. And then, keeping in line with a long-held tradition in the eventing community, the criticism will begin — including right here on EN. But Bobby said the committee understands criticism comes with the territory.

“It’s sometimes hard for the general public to know how we come to a decision,” Bobby said. “But with just a few exceptions, I don’t think the riders are really left wondering. With that first list we made, we left a few notable names off the list who in the past might have been on the list just because of who they were. But we decided right from the beginning that we were going to reward results and consistency no matter who you were.”

Bobby hopes avid fans of the sport can see a pattern emerge when they look at the lists the committee has produced; and even if they can’t, he said the criticism hasn’t made being a selector any less enjoyable. “I thought I might be more sensitive to people’s reactions to the lists and the teams,” Bobby said. “But the committee feels it has been impartial and non-political; as a whole, we feel very at ease with the way we’ve gone about the process.

“People also have to remember that we select teams not only on performance but also on soundness,” Bobby said. “Sometimes confusion comes into who is selected and who isn’t, and it’s because soundness played a huge role. And that’s something we can’t talk about. Sometimes you’ll wonder why your favorite rider wasn’t selected, and there are so many things the general public can’t know because of the privacy of the riders and owners.”

Of course, Bobby understands criticism from the fans and even the riders all too well, as he campaigned at the upper levels for many years. “I was in the rider’s position where I sat around waiting for the lists to come out,” Bobby said. “I totally understand when there is disappointment and disillusionment. It’s just natural. I don’t take offense because I’ve been there and have felt all those emotions.”

And when it comes to facing anger from those who closely follow the sport, Bobby said he can understand that too. “Fans have every right to have their favorite riders and horses they root for, and it’s sometimes just as disappointing for them when they don’t make it. It’s unrealistic to think people aren’t going to get angry or frustrated. It shows excitement, and it shows people are interested in what’s going on.”

The Selection Committee’s job is to make the best decisions for the team and U.S. eventing as a whole, Bobby said. “Taking into consideration everything being a selector entails, it’s a very subjective endeavor,” Bobby said. “Back in the late ’80s and early ’90s, the U.S. tried to go to a highly objective system based only on points, and it was arguably the most unsuccessful brief span of time for eventing in this country. So there has to be an element of subjectiveness.”

Just as it’s impossible for the selection process to be totally objective, Bobby said it’s also never going to be a black-and-white process. “There are so many factors that go into deciding who makes these lists — so much research and looking at results and really studying the arc of someone’s season or past two seasons in every phase,” Bobby said. “I want people to know that whether they agree with the final decision or not, the work that’s going into making the training lists or team selections has been painstakingly thorough.”

One year into the job, the selectors can look back and say they’re proud of what they accomplished. Bobby said receiving positive feedback on the consistency people see across the training lists and team selections makes the job that much more rewarding. “The biggest compliment someone could pay is they get where we’re coming from,” Bobby said. “We do our part of the job to get it right, and then it’s up to the riders to go perform.”