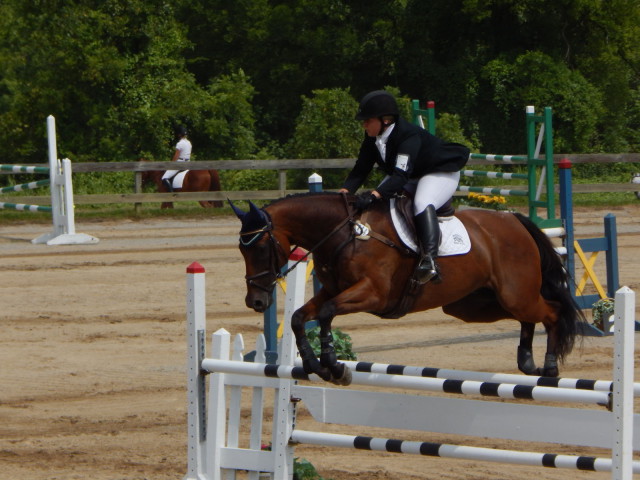 Goose in his first Prelim. Photo by Lee Carson

I just got home from my final event of the 2014 season, and all I can say is “Wow!” I feel like it was yesterday that I was digging through all of my trunks to make sure my event gear was together before heading off to my first event of the season. I cannot believe that it is time to pack away my show bridles again until next year.

2014 was an interesting year for me, and turned out to be a huge year of growth within my riding career. I have been quite fortunate to have a couple of horses prior to this one with huge hearts (not that Goose’s heart isn’t huge!) and who have been willing to blindly jump off of a cliff for me, no questions asked.

Goose, on the other hand, is a bit more careful than that. While he is willing to jump just about anything, is thoroughly convinced that he is allergic to wood, and loves to show off in the dressage ring, this one is going to call me out on my mistakes nine times out of ten.

Thankfully I have had some pretty good coaches over the years, and I have two fabulous ones right now, so I don’t make tons of mistakes, but I make enough of them. This has led to me adapting my riding style a bit this year in order to better ride my horse now that he has moved up to the Preliminary level, and we still have lots of homework for this winter! 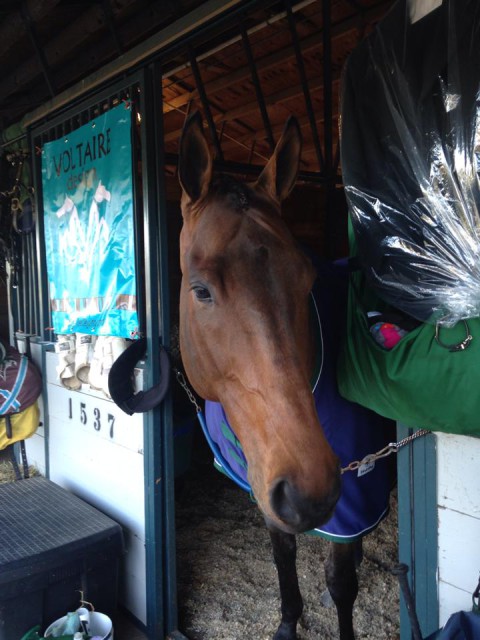 Goose at Team Challenge after dressage

I just came home from the Hagyard Midsouth Team Challenge event this past weekend, and I was quite disappointed in my performance throughout the weekend. We posted a well-below-average score for us, then I had a beautiful warm-up for the show jumping, only to loose my mind waiting at the gate and have a bit of a panicked round for two rails down, which unfortunately is the worst round we have had so far in Goose’s career.

I set out on the cross country Saturday morning with something to prove: that I would not make this the all-around worst weekend for my horse and we would come home fast and clear. The footing was fabulous after the rain Lexington had gotten earlier in the week, and the course looked like it would ride very well if ridden positively. We were trucking right around, having conquered the tough water at 5AB, the big open oxer, the skinny turtle in the second water, and the largest Preliminary corner I have ever seen.

I was feeling great as I galloped down the hill into the back field where our coffin was, fully aware that we were sharing the rails in and ditch with the CCI*, and that it had ridden quite tough the day before. We were up on our minute markers, which is something I had not paid much attention to this season until this ride.

I balanced for the rails, closed my leg to let him know that “YES! We are going!” and even gave him a reassuring tap behind my leg for good measure. Let me just say here that I love my horse because he jumped in like a champion, unfortunately so well and careful behind actually that he pitched me up onto his neck with a huge snap of his hind end.

All of a sudden I was staring into the bottom of the ditch, fully aware that if he jumped this deep ditch like he jumps every other ditch that I was falling off.  So I made the quick decision to pull him off and we came back around. Sigh, there went all of my hope for redemption, and thus we cruised home at a less intense pace since we were officially out of the running.

I was thoroughly disappointed with myself for a few minutes, letting that happen at my last event of the season and having to go into the winter with that hanging over my head.  Then I took some time to reflect on the entire year, and realized that I have accomplished so many things with this young horse, and in comparison to my previous seasons at Preliminary this one should be considered a grand slam.

Yes, I accumulated more time penalties in one event that I probably had in all of my previous runs combined.  Yes, I had one-stop runs at two of my four runs with my horse this year.  But I feel that I am riding much better than I ever have in the past. My dressage scores are astronomically better than they have ever been across every level, not just at Preliminary, and I only had four rails across seven rounds, with four of those being clear rounds.  That in itself is huge for me, as I carry many demons in the show jump ring. 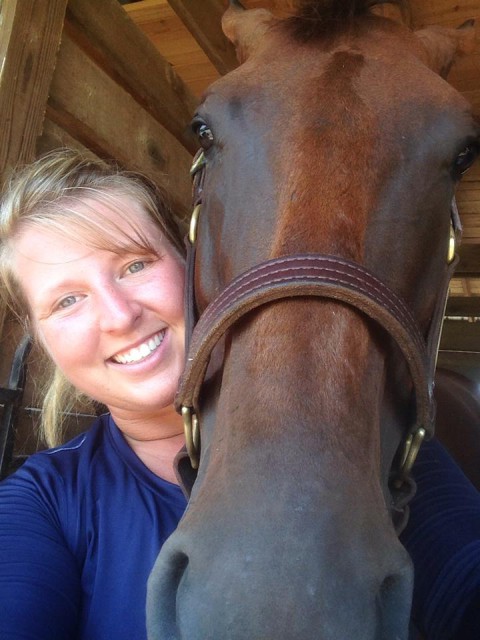 This sport really is all about perspective, and there will be highs and lows, but you have to take them all with a grain of salt.  I have learned that every day is a learning experience, and even if I have a rotten day where I want to bang my head against a wall I have decided to take something from that ride and learn from it.

I learned last Friday in the show jumping that no matter what I think is going on underneath me, I must always keep my leg on.  I learned on Saturday that I need more sticky spray to keep myself in the saddle when my horse kicks up over both our heads.  I learned this season that if I do right by Goose that he will give me 110% and I am thankful for that because few of us are lucky to find that in a horse.  I made a lot of new friends, restored relationships with some old ones, and have a pretty fun plan mapped out in pencil for next year!

We all have our struggles in this sport, but at the end of the day as long as our horses come home sound and happy then we really are winning, despite the number on the scoreboard.  As I head into the winter I am working on my dressage and show jumping until my face turns blue, and dreaming of lower scores and tighter toes.  Hopefully the next time I check in I will have gotten to a jumper show or two and will be reporting that I no longer quit breathing at the in gate.