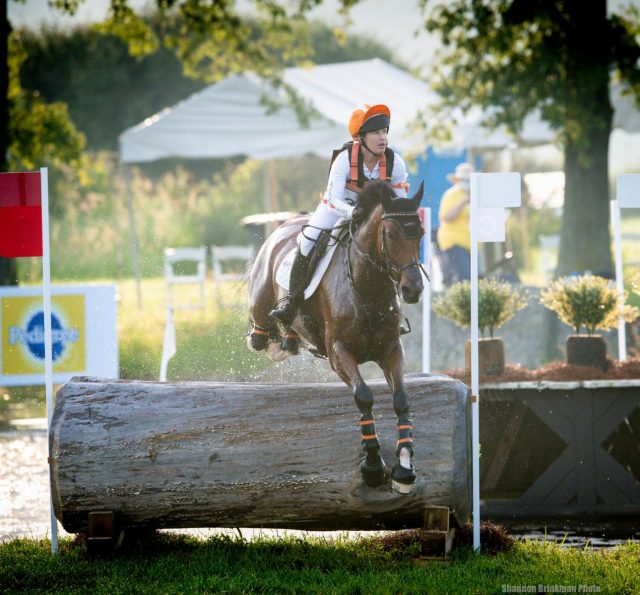 Oh cross country phase of a three-day, how we’ve missed you! But no one missed you more than Sharon White and Claus 63. The overnight leaders after a 29.5 in the first phase, they were all business around David O’Connor’s CCI3*-L track to stay on top of the inaugural division.

“I’m thrilled with my horses. They are lovely horses. I’m always happy with them, but it’s always nice when they end up on top, so hopefully we stay there,” Sharon said.

Cruising around easily, they picked up 1.6 time penalties for a two-day score of 31.1.

“He’s such a fun horse to ride. I feel like he suits me to a t — we’re very, very similar. He’s very studious. He wants to know exactly what the plan is and he has the binder and wants to read through it 80 million times to be prepared, and I’m kind of the same way,” Sharon said. “Sometimes that works and sometimes it doesn’t when you’re that similar to your creature.”

Sharon and Claus have no room for error tomorrow, Ben and Kitty are one tenth of a point on their heels.

Sharon White and Claus 63 stormed around the cross country to maintain their lead at the Great Meadow International CCI3*-L.

A double clear run for Kimmy Cecere and Jessica Bortner-Harris’ Bishop de Selah, an 11-year-old Zweibrucker/Thoroughbred (Begat Pfaythe x Slew Dinkum), moved them into third place after cross country. They remain on a score of 33.7.

Katherine Brown and her 7-year-old Hanoverian Carnaby, dropped to fourth with 2.4 time penalties.

The new partnership of Rebecca Brown and Fernhill Fortitude, the former ride of Jenny Caras, are sitting pretty in fifth place on a score of 34.7.

This group will show jump for their final placings beginning at 2:28 pm eastern.

I could post an action shot, but sunrise was just TOO GOOD. #greatmeadowinternational #marsgmi