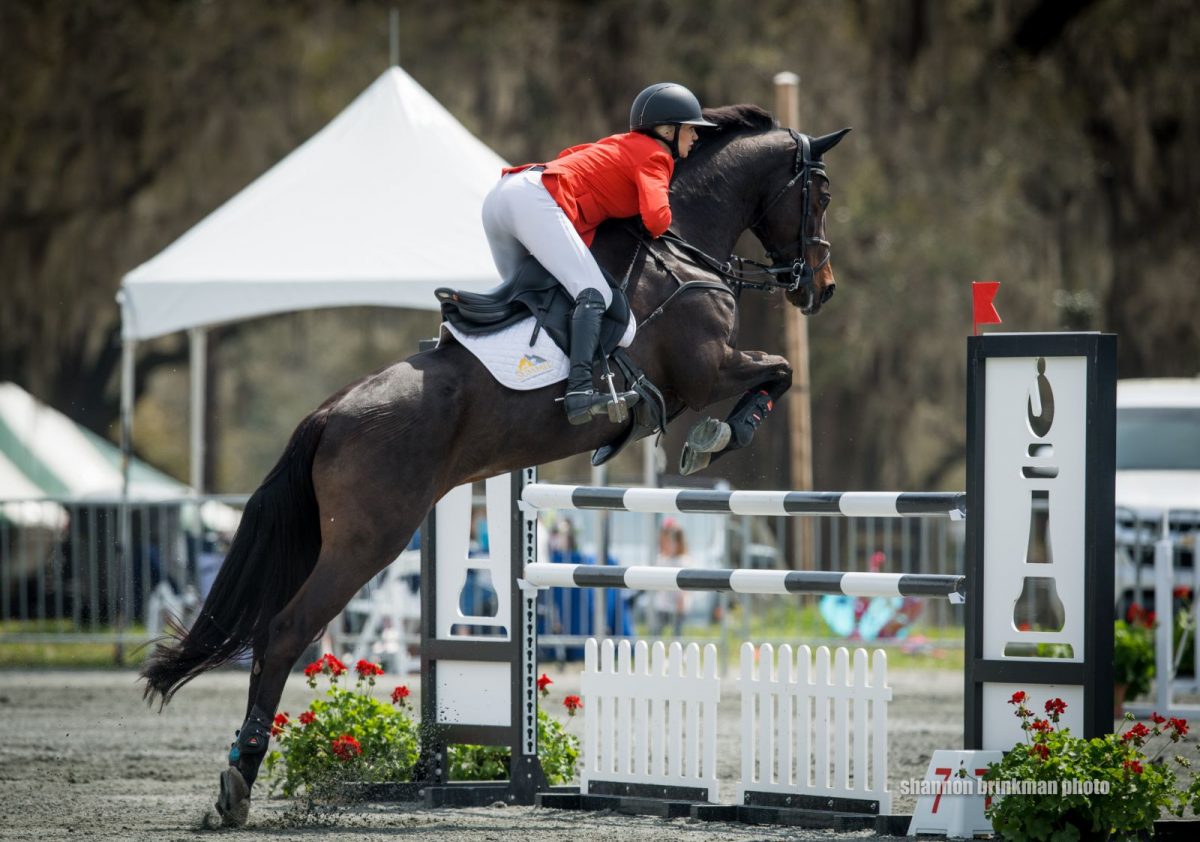 Chris Barnard challenged riders both with his jumping questions as well as the clock on today’s Red Hills show jumping track, prompting a leaderboard shuffle that produced a nearly all-new top five after phase two.

Marilyn Little, also an experienced show jumper, and RF Scandalous (Carry Gold – Richardia, by Lario) managed to hang on their early lead and even lengthen their margin thanks to a clear round inside the time. The Kentucky-bound pair will have 8.9 penalties of leeway around Mike Etherington-Smith’s cross country track tomorrow, remaining on their dressage score of 22.4. “Kitty”, owned by Ms. Jacqueline Mars and Phoebe and Michael Manders, and Marilyn were tapped as the pair to beat this weekend, and they’ve thus far made good on that promise.

In total, 10 out of 28 CCI4*S combinations produced clear rounds inside the time allowed of 83 seconds. These hard-to-come-by clear rounds were valuable, allowing several pairs to leap from outside the top 10 after dressage to inside the top 5 after show jumping.

Originally seventh after dressage, Allie Knowles and Katherine O’Brien’s Ms. Poppins moved into striking distance in second place, adding no penalties to their dressage score of 31.3. This is the first FEI event since 2019 for both Ms. Poppins and Allie; the 10-year-old Westphalian mare by Congress, out of Copa Cabana (Champion Du Lys) competed only in National divisions in 2020, a lighter year for Allie, who gave birth to a beautiful baby girl last fall.

“It’s great to be back, that’s for sure,” Allie reflected. “It’s been interesting because a lot of things I think are better. I rode for most of my pregnancy but I didn’t compete at all because COVID hit and by the time we reopened I was too pregnant. I think a lot of things are a bit better bc I had time to reflect on it and just train and mostly I’ve just gained a new perspective. It’s way cooler now that I have a kid!” 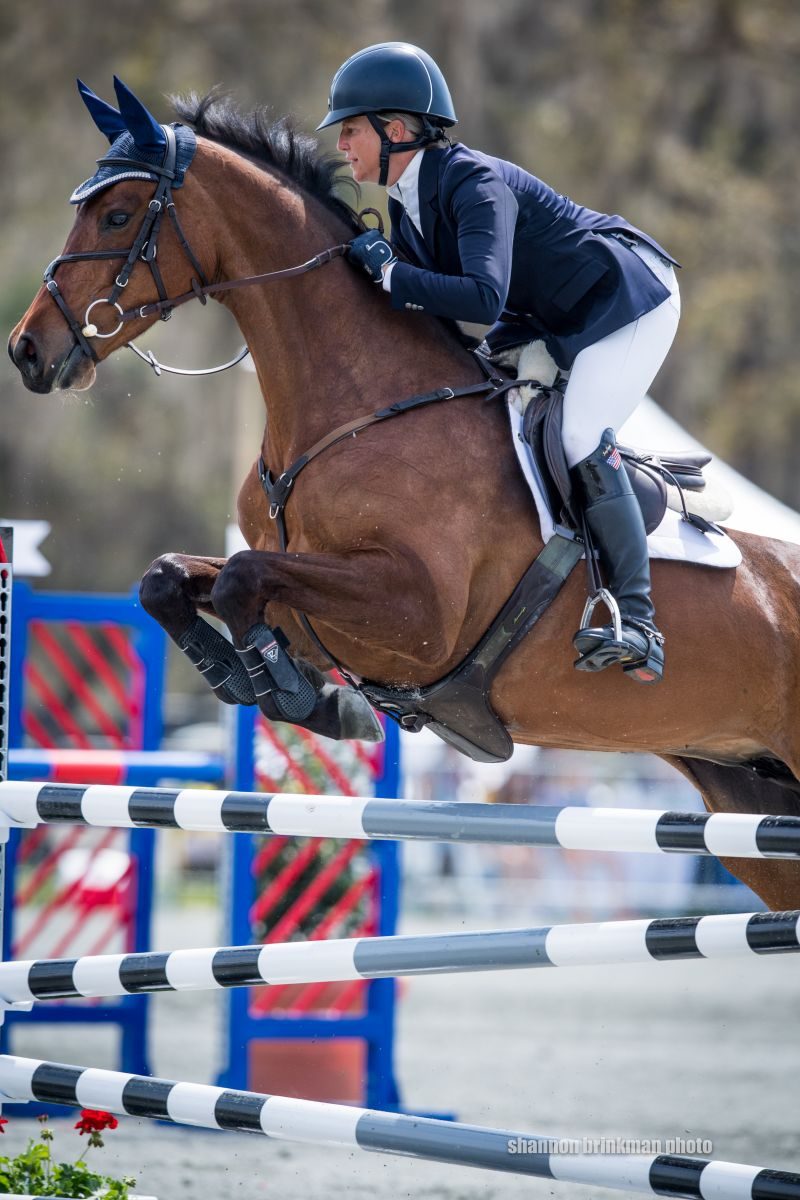 It wouldn’t be Allie if she didn’t tick every box of preparation en route to this weekend, her first FEI back since her pregnancy. “I kind of made a goal to be out at Grand Oaks in January, and I’ve been out there every weekend for the last eight weekends competing,” she said. “I’ve gone through the paces, I’ve fallen off, gone off course, I’ve won and lost and each weekend I feel stronger, sharper, and a little further away from having a c-section.”

As for Ms. Poppins, a mare who Allie knows like the back of her hand, having campaigned her since she was four, Mike Etherington-Smith’s twisty, tight track with “lots of natural half-halts” should suit her catty style just fine. “She’s a real catty, small mare that has a ton of heart and never pulls,” Allie explained. “She’s super light to ride, she goes in a Nathe bit in all three phases. So I don’t need to ride hard, I need to ride with finesse and efficiency. She’s able to make short turns on a twistier track and I can really keep riding forward.”

Allie’s got her eye on competing in the CCI4*S at Kentucky, near her home base in Lexington, with at least one of her top horses, but she hasn’t made a final decision yet. 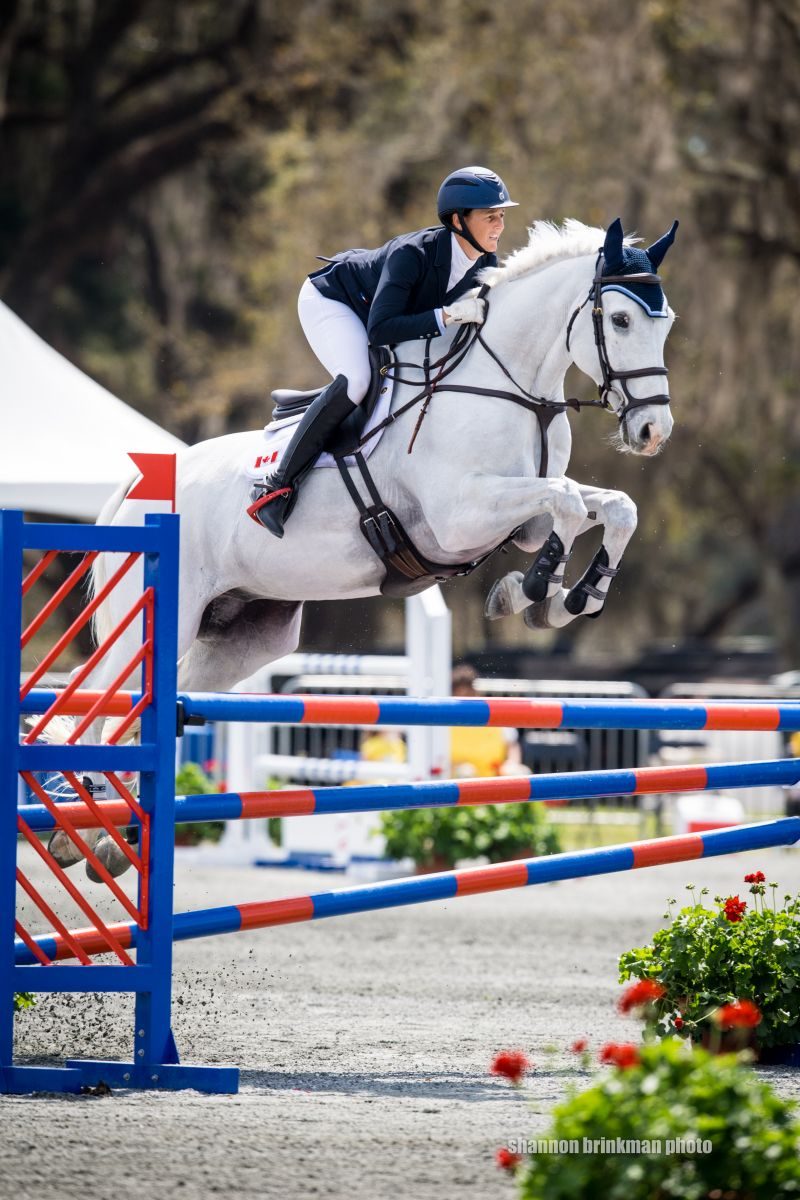 Kentucky-bound Qorry Blue D’Argouges (Mr. Blue – Hardie Du Bourg, by Count Ivor) also produced a clear round inside the time for Canadian rider Colleen Loach. Owned by Peter Barry, the gray Selle Francais gelding is 17 this year and will look ahead next to the CCI5* at Kentucky in April. Second to go in the ring today, Colleen said she figured time might be tight, so she made a plan to go for it. “I knew I would need to be a bit speedier,” she said. “Chris (Barnard) had a really great course put together. You really had to play with your broken lines to get the distances and pay attention to the clock. (‘Qorry’) listened and jumped really, really well.” 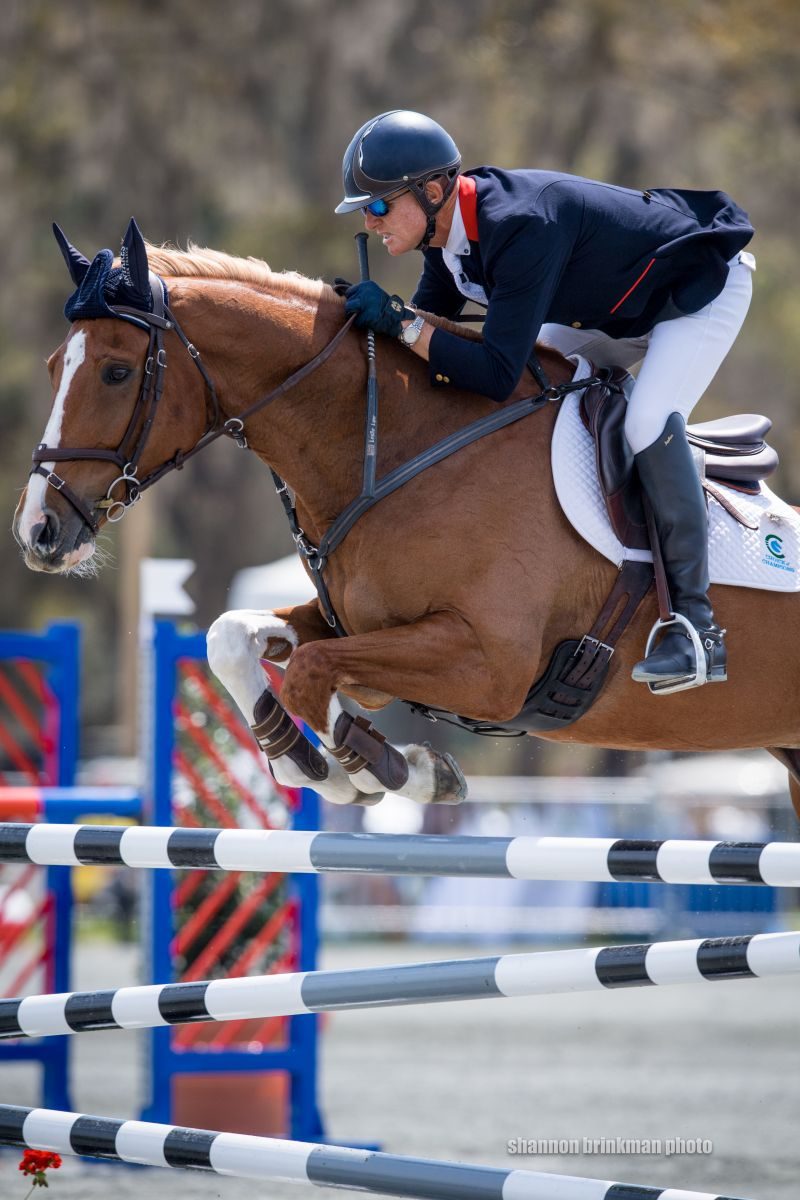 Leslie Law and Voltaire de Tre were also rewarded for their efforts today, moving from 15th into fourth thanks to a double clear effort to remain on a score of 33.8. The 12-year-old Selle Francais gelding by Gentleman IV and owned by Tré Book was second here at Red Hills in 2020. 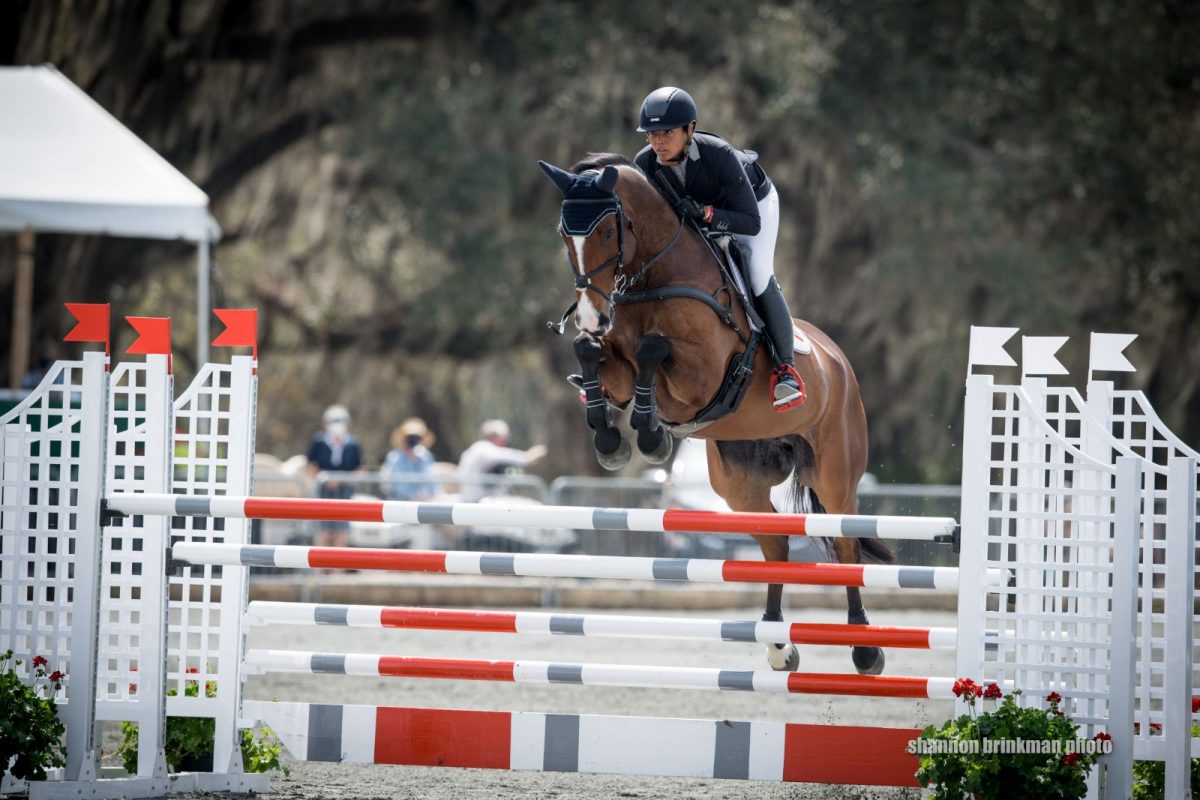 Also moving and shaking their way up the board are West coast pair and fellow new mother Kaylawna Smith-Cook and Passepartout, who collected a clear round to move into fifth on their dressage score of 33.9. Passepartout (Pasco – Preschel, by Pardon), a 12-year-old German Sport Horse Gelding owned by Mark and Gretchen Cook, has won at the CCI4*S level and has one CCI4*L under his belt with Tamie Smith so far, but this is the first start at the level for him and Kaylawna.

Can we take a moment to honor all of these incredibly strong women who have successfully, somehow, managed to have a baby and turn around to make their way back to the top levels of an insanely demanding sport? In a sport that does not wait for a woman to return from maternity leave, new mothers have a daunting ladder ahead of them when they make their comeback. My proverbial hat is off to all of you beautiful, brave, inspiring women – you are all amazing.

Kaylawna, who was named to the US Eventing Emerging Athlete Program Training List this year, will also contest the CCI4*S at Kentucky in April with “Pasco”. 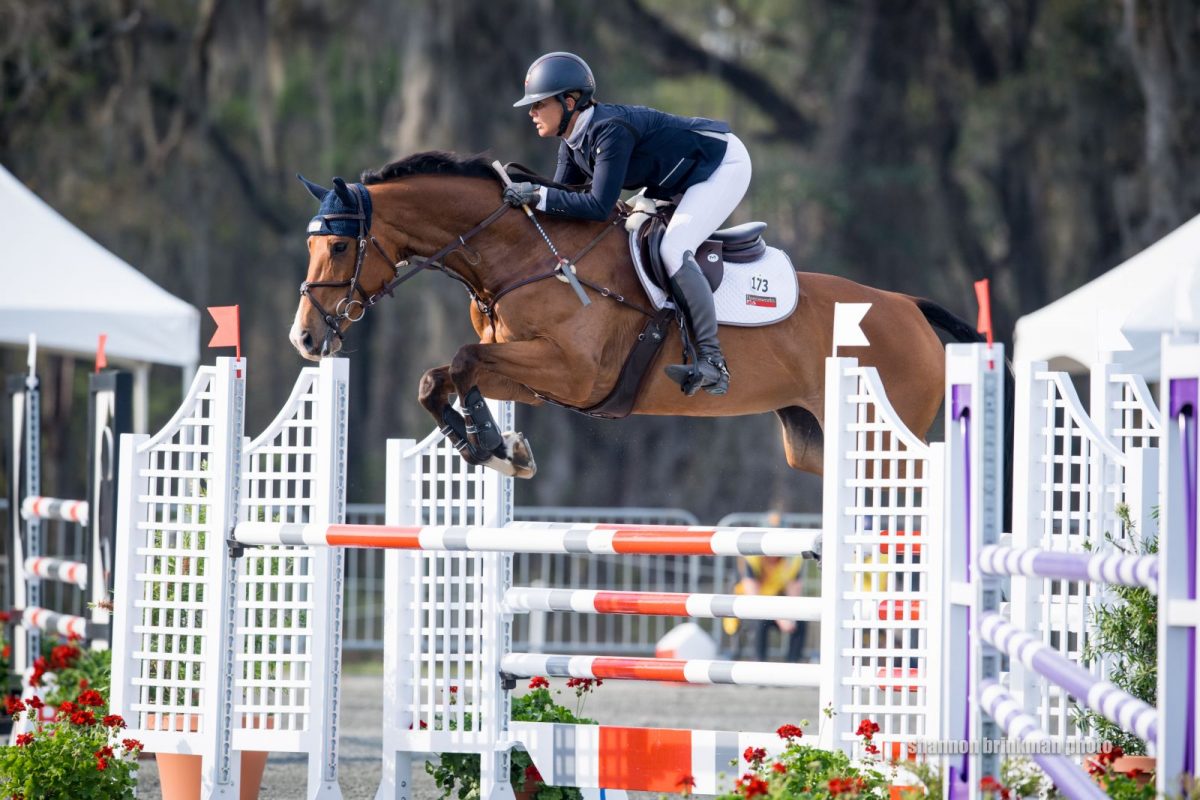 Looking to the CCI3*S, dressage leaders Tamie Smith and Solaguayre California (Casparo – Solaguayre Calandria, by Casall), a 10-year-old Argentine Sport Horse/Holsteiner mare owned by Jullienne Guariglia, retained their lead with one rail down for a two-day score of 24.1. 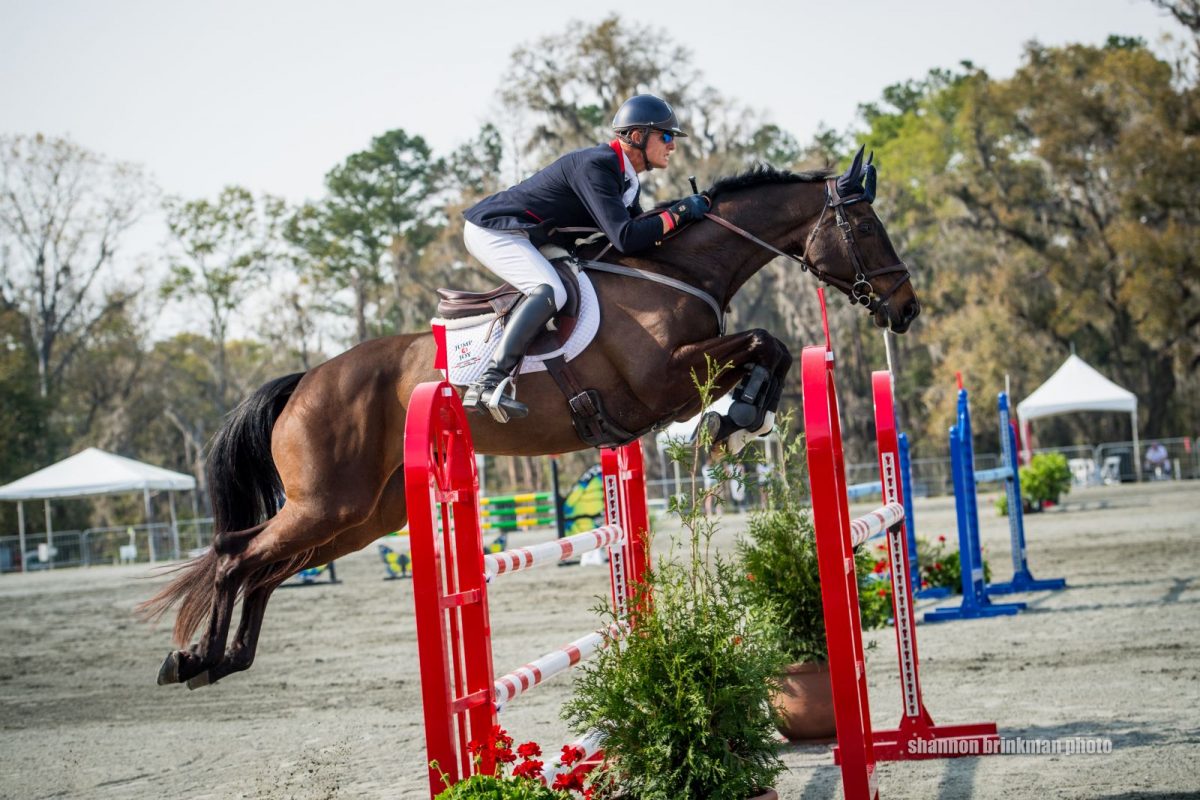 2020 USEA Mare of the Year Lady Chatterly (Connor 48 – Jucy, by Mytens) piloted by Leslie Law and owned by Lesley Grant-Law, Jackie Brown and Steve Brown, also holds position in second on a score of 25.5. 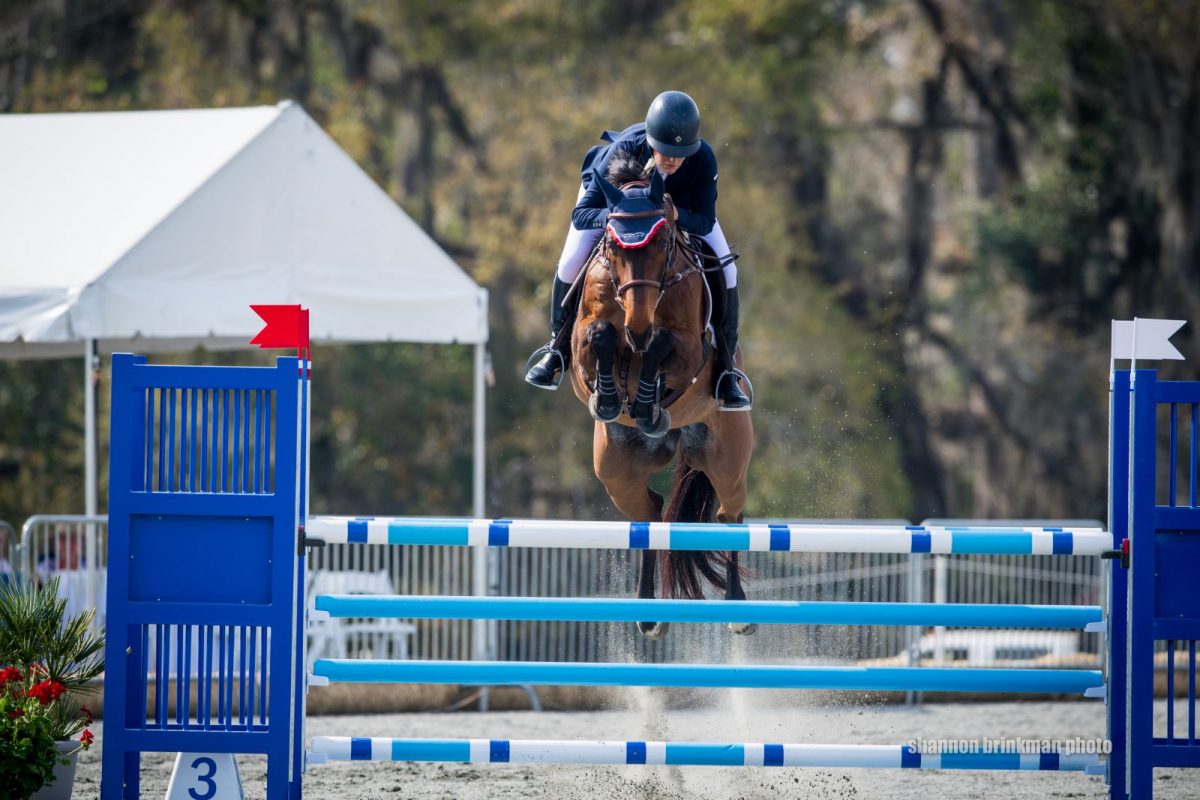 Sara Kozumplik Murphy and her 13-year-old KWPN gelding, Devil Munchkin (Cariso 3 – Rhona, by No Ski), move from early fifth into second place with a score of 26.8. The CCI3*S show jumping also proved to be tough in terms of clear rounds; 13 of 35 pairs collected clear rounds inside the time. 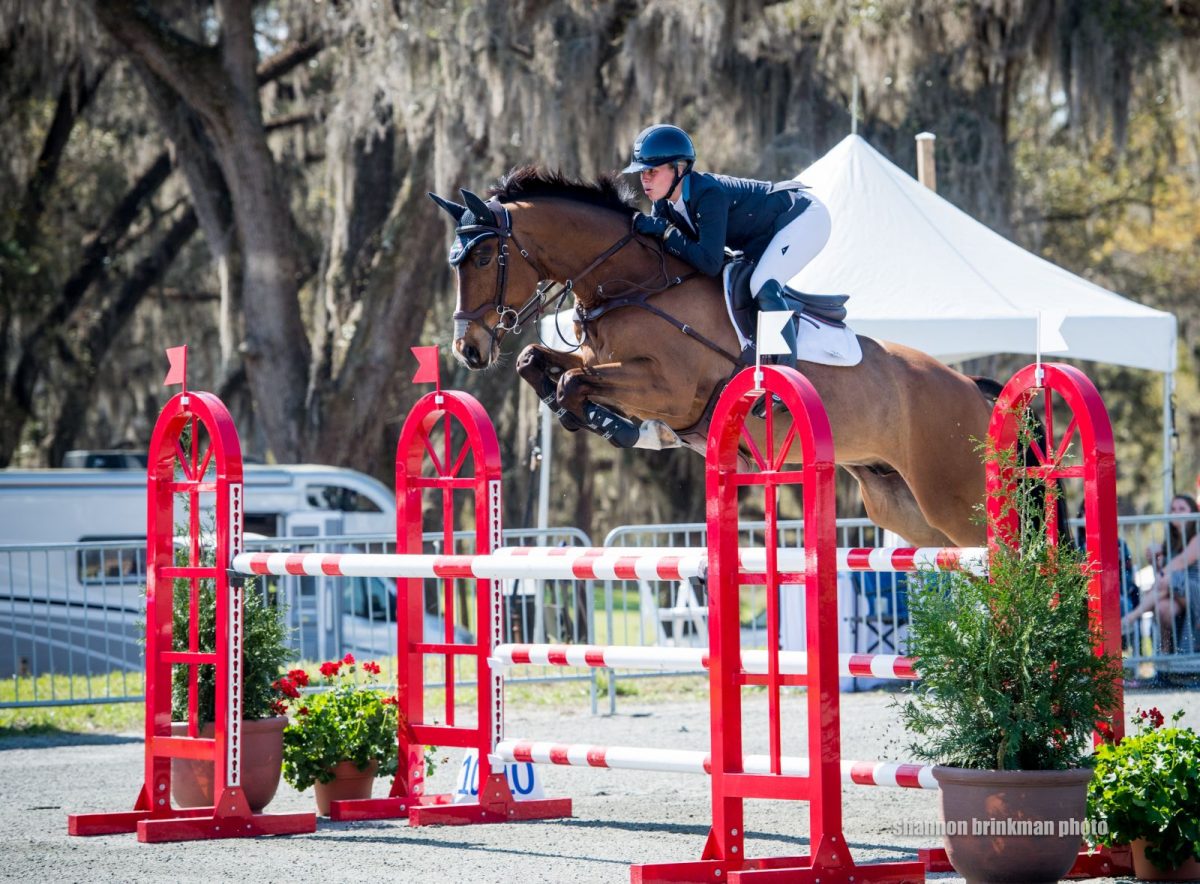 In the CCI2*S, Alyssa Phillips and Cornelius Bo (Concours Complet – Charlotte), who at seven years old is showing promising talent as a competitive horse in all three phases, retained their dressage lead thanks to a clear show jumping round today, remaining on a 27.3 heading into tomorrow’s cross country. Closely in pursuit is Lauren Nicholson with two rides, I’ll Have Another in second on a 27.6 and Hindine on a 27.7 in third. 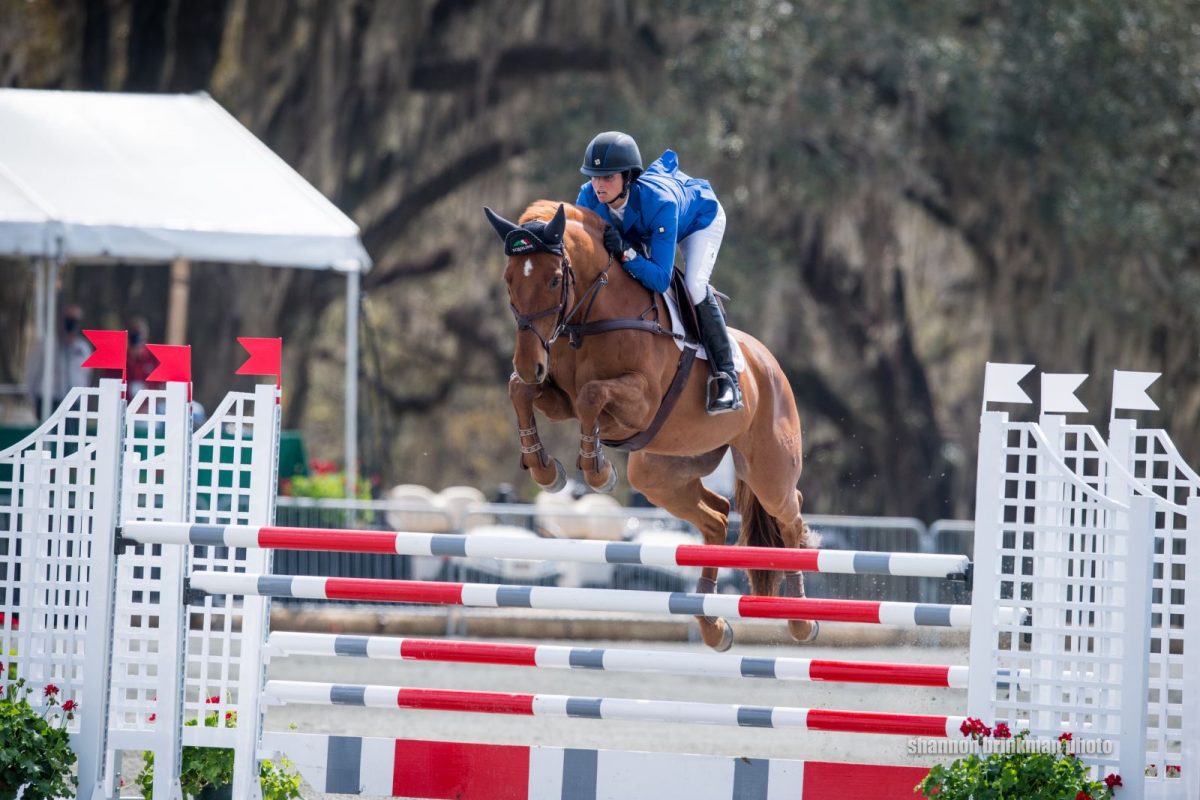 Looking to the Advanced division, Jennie Brannigan will also hang on to her lead aboard Tim and Nina Gardner’s FE Lifestyle (Leo von Faelz – Berina A, by Brandenburger), taking her dressage score of 30.2 into tomorrow’s conclusion of competition. Liz Halliday-Sharp and Cooley Moonshine broke their original tie for second to hold the place on their own with a two-phase score of 31.6, followed by Maya Black moving from fifth into third on a 33.1 with Miks Master C.

Keep an eye out for a course preview coming your way first thing in the morning, and for our concluding report tomorrow after competition finishes. Go Eventing. 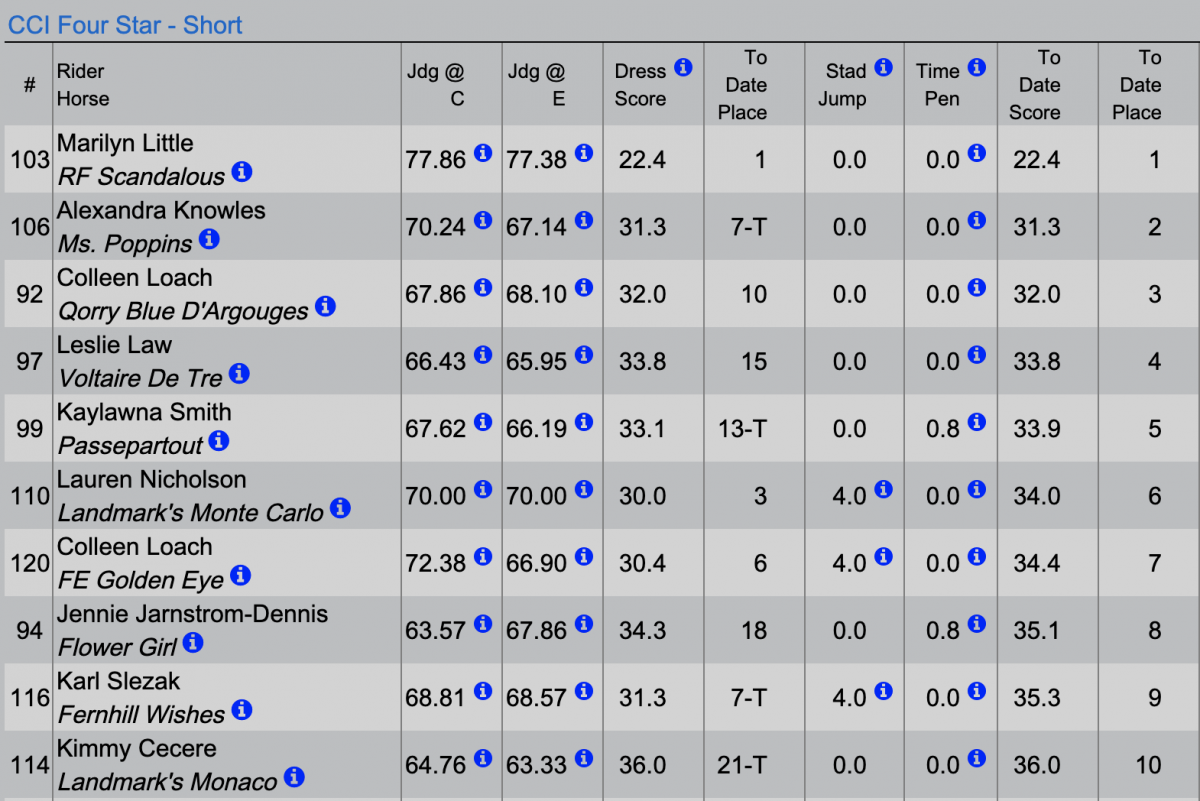 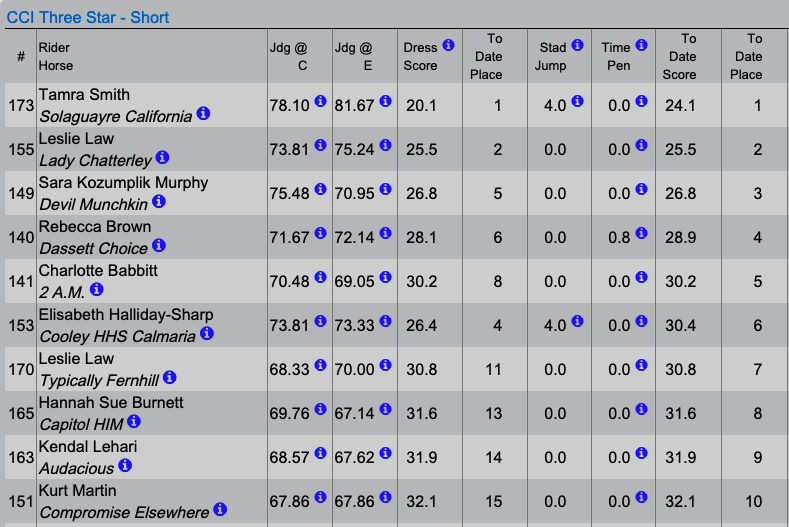 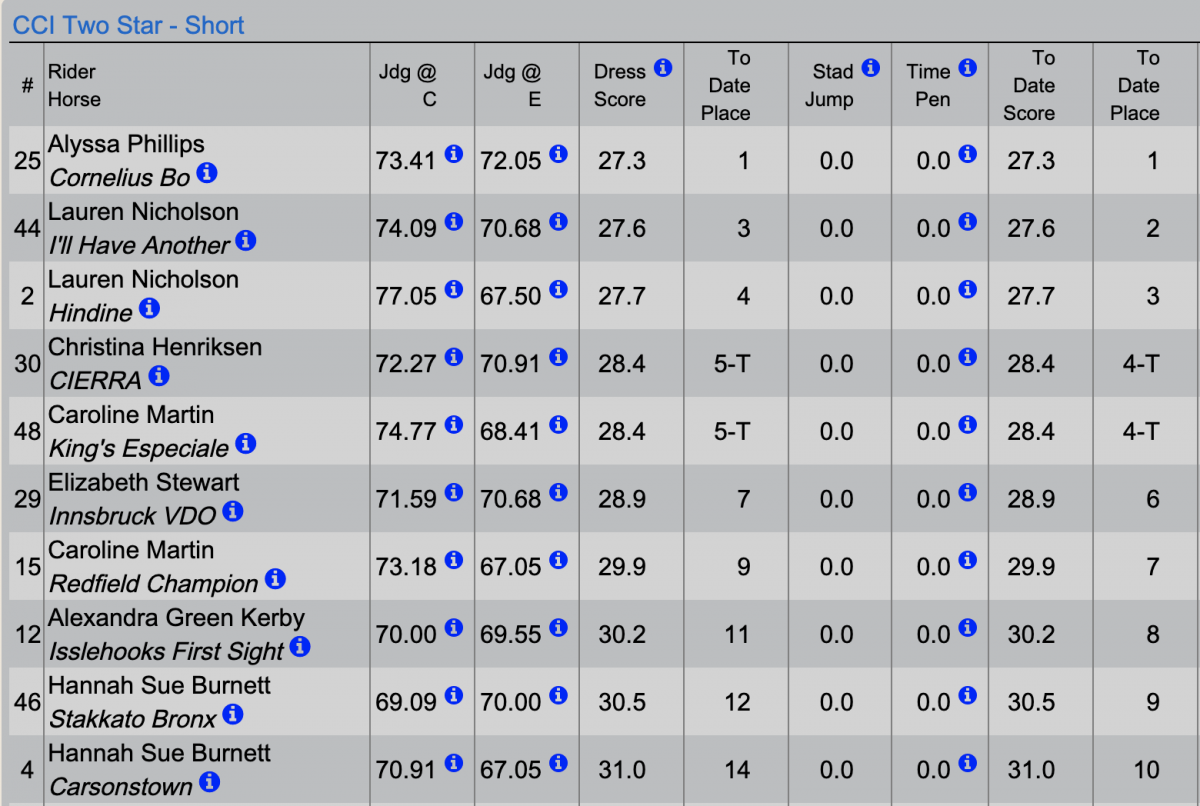 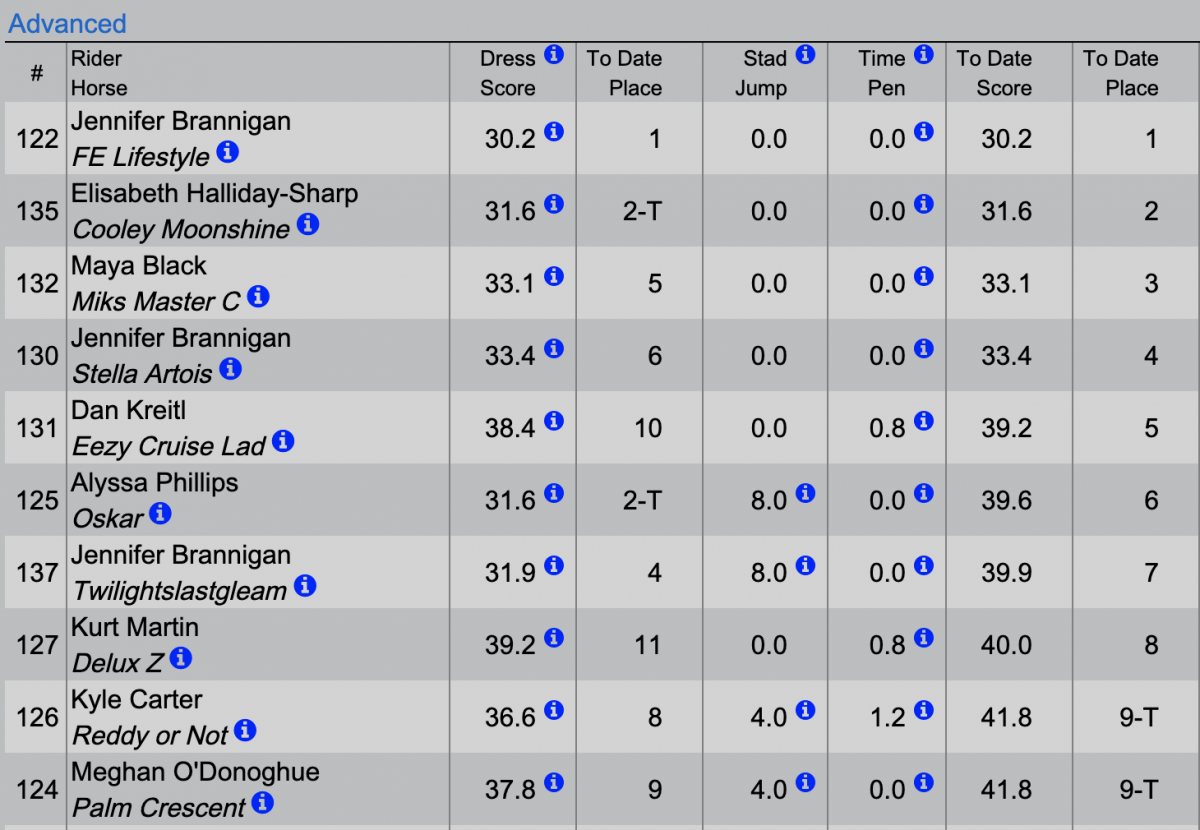