California-based eventer Nicole Carroll hasn't always competed as an eventer, but her heart was always in the right place. She recently made a big move East to pursue her dreams, and she's graciously agreed to take us along on the ride. Thanks to Nicole for writing, and thank you for reading! 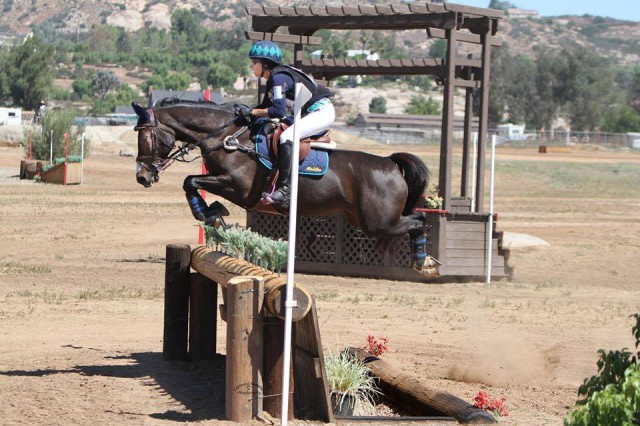 In my life, I have known several people who bravely changed the course of their lives mid-track. These people ranged from the woman who aced law school only to ditch the bar exam and hike through Alaska for three months instead, to the drug addict who was pronounced dead three times, only to attend college in his 50s, earn a PhD, and become a respected author and educator.

I have always admired these people and respected their courage. I also, secretly, counted myself lucky that I would never be one of them.

From the time I was four years old, I knew what I wanted to be- a member of the US Olympic Show Jumping Team. My childhood drawings all featured me in the infamous red coat on a stalwart horse, clearing an impossibly high fence with ease. (The facts the horse was ill conformed for this job, and that George Morris would never allow us to enter the ring at Aachen with a long mane blowing in the wind, were immaterial to me).

There was just one snag- when asked to draw my idol, invariably I sketched a bay horse with a big blaze and a woman who seemed more a part of that horse than of this earth. And I would write “Karen O’Connor and Biko.”

“She’s an eventer,” my hunter/equitation friends would remind me. “They’re all crazy!” And so I hung posters of Beezie Madden and Anne Kursinski and McLain Ward dutifully on my walls. But, I hung a poster of Karen and Biko too.

I come from a very non-horsey family. Several good hunter/jumper barns were a short drive away, and all my parents knew about eventing was that it had been the downfall of Superman.

One time, when I was about 12, I tried a lesson with an event trainer, who instead of taking me breathlessly around cross country, stuck me in a dressage saddle where I bounced like a sack of potatoes. “Eventers mostly practice dressage,” she told me. I was back at the hunter/jumper barn the next day.

Life has a way of coming full circle. I went on to become a professional Hunter/jumper trainer. I grew my business to 20+ horses, took multiple students to equitation finals, made a good living. Along the way, my childhood dreams of red coats and glory repeatedly bumped up against the harsh reality of finances and soundness.

In other words, the good horses ended up hurt or sold, and the ones that didn’t I couldn’t afford to produce. I learned to enjoy the process of teaching riders and horses, made a name for myself as someone who could do well with greenies and figure out the tricky ones. But, deep down, I still wanted to compete. And that’s when a new client, who was a die-hard three day eventer (“I have no interest in doing those hunter shows!” she announced from Day One), showed up at my barn with three horses.

I still can’t say for certain what made me, after a year and a half of teaching her at home and watching her drive off to events solo, decide that I wanted to give this eventing thing a try. Maybe it was just time for something new. Maybe it was the little bay mare who was about to make me an FEI rider for the first time in my life.

And maybe it was the memory of drawing Karen and Biko at the Head of the Lake and wishing I could try that too. I didn’t know, when I asked “could I try eventing Malibu?” that my life was about to change mid-course. That my goals and my business and even my address were about to change forever. And I certainly didn’t know that the woman I drew as a child was about to become a huge part of my life.

I suppose this is also true for my friends who made abrupt changes to their lives. I highly doubt any of them had a perfect plan when they came to the fork in the road. But I can also now proudly say that I am one of them. And that changing your life mid-course is not at all the scariest or worst thing you can do.

The worst thing you can do, in my opinion, is continuing to live the same life because you fear change. And so, here I am, not yet at the Head of the Lake, but certainly at the start box of a new adventure. And, though I’m sure I’m in for the ride of my life, I plan to kick on to the end.

Stay tuned for the next installment in Nicole’s big move!