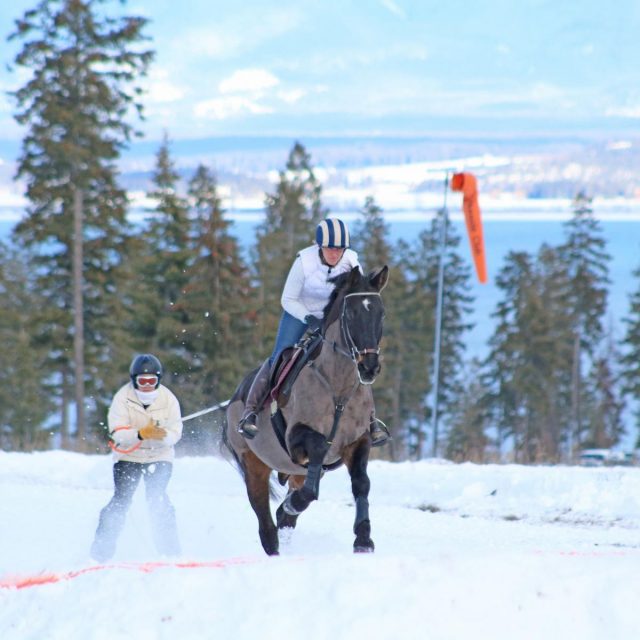 Eventers gotta keep themselves entertained in the off-season somehow! As such, Rebecca Farm is gearing up to host its first skijoring (think: skiing behind horses) competition on Dec. 30-31.

It’s actually the first time Rebecca Farm, located just west of Kalispell, Montana, has ever held an event during the winter months.

“Many folks associate Rebecca Farm with eventing in the summer, so we’re thrilled to try something new, and bring a different kind of sporting event to Rebecca Farm in the winter,” says organizer Sarah Broussard. “Not only is skijoring a unique sport in itself, it is so much fun to watch.”

Derived from the Norwegian word skikjøring meaning “ski driving,” skijoring is a winter sport that combines skiing and horseback riding. The sport consists of a horse pulling a skier through an obstacle course, all while hitting jumps that range in size from three feet to nine feet high. Competitors are judged based on how long it takes for them to run the track, which stretches approximately 850 feet from start to finish.

Fortunately for the organizers, no major changes will need to be made to the Rebecca Farm course in order to host the competition. “It is not so much about changing anything on the farm,” Sarah says. “It is more about making sure we have enough snow.”

In the event the farm does not receive enough snow before the competition, Sarah will have it trucked in, she says.

Those that finish the course the fastest will be awarded a cash prize, known as the “total purse.” This year’s purse, to be raised via sponsorships, will total up to $25,000. A portion of the proceeds from this year’s competition will be donated to Halt Cancer at X, an initiative created by Sarah that raises funds for breast cancer research and support services.

Last year’s skijoring competition, hosted by the West Shore Visitors Bureau in Lakeside, welcomed nearly 100 competitors and thousands of spectators over two days. Sarah hopes even more are able to make it to this year’s event.

“People come from all over to experience skijoring in the Flathead,” Sarah says, noting that some people come from as far as Colorado to both attend and compete. “We look forward to carrying on this community tradition, and hope to see even more faces rallying behind this festive sport in December.”

Even with a seasoned organizing team in place, there will still be a need for lots of enthusiastic assistance. Participation and support of the community, through both sponsorship and volunteers, will be vital in making the event possible, according to the organizers. Those interested in volunteering are encouraged to contact Heidi Diegel at [email protected] For more information regarding sponsorship, contact Marcia Spano at [email protected]

Any takers, EN? For more information on the skijoring competition, click here. Learn more about the sport of skijoring here.

Edited from a press release.