The eventing community continues to mourn after the loss of Conahy's Courage, a 10-year-old Irish Sport Horse gelding owned by Imogen De Lavis, that was euthanized Saturday after a rotational fall at Red Hills CIC3*. Kyle Carter sent in this heartfelt tribute in memory of Courage. 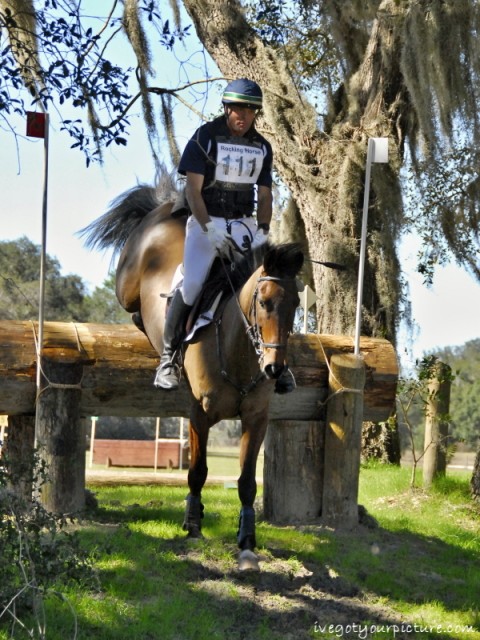 Horses have always been part of my life, so I am more familiar than most with the joy and heart break they can provide. Last weekend, I received a large helping of heart break. As most will now know, I had a tragic accident on cross country while riding in the CIC3* division at Red Hills. A fall resulted in our horse, Conahy’s Courage, having to be put down.

Courage had been with us for almost four years. I did his first event with the plan that I was producing him for his owner, Imogen, to ride. Not long into his career, Immy moved to England with her two other horses, and the she and her parents made me the generous offer to keep the ride on and take a half ownership in him.

At the time, I was struggling to curate a string of horses to try for the top level of the sport and hopefully compete at the Olympics in Rio. I will never forget their generosity to me; they saw the lack of options for me and offered me a way forward.

Courage fit the dream well; he had the most powerful jump, wonderful movement and was not put off by any jump. A more applicable name than Courage could not have been found. I have ridden many horses, and he was in a league of his own when it came to boldness.

Along with that came a spirt that would not be suppressed. Over the last several years we had been working to giving him the mileage and education to get to Rio next year. I only ran him fast a couple of times in his career, as I was trying to preserve him and to do my best to achieve the lofty goals that we had set out.

Due to this and the fact he had little use for dressage, his win column was small, but I always felt he would come into his own in this next year or two. This seemed to be coming to fruition, as in the last five or six outings he had become rideable and focused; the dream seemed to be coming together, and the years of patience was paying off.

I truly believed that the hard part was over. Sometimes you never get it right. The hard part is only just beginning.

All the talent in the world couldn’t match his best quality, which was how kind and sweet he was. He was a favourite in the barn and great with my kids — a joy to be around on the ground and a devil if you got on his bad side while riding him. I just wish we could have reached his potential, but more than that, I wish we had more time together.

Of course, I will keep riding and competing, but the way forward is blurry through the tears. My string is diminished; without him, my dreams are doubtful, but most of all my heart is broken.

Having just sold an Intermediate horse, we were able to pay to have him returned to our farm later today, where he will be laid to rest. In time I am sure the pain will pass, but the joy is going to be a little less.

Thank you to all those in the barn who took such great care of him; I know how you will miss him. Thank you again to Allison, Immy and John De Lavis for trying to help me when you had no reason to, but, most of all, thank you for letting me have this time with Courage. He was small but he was MIGHTY!