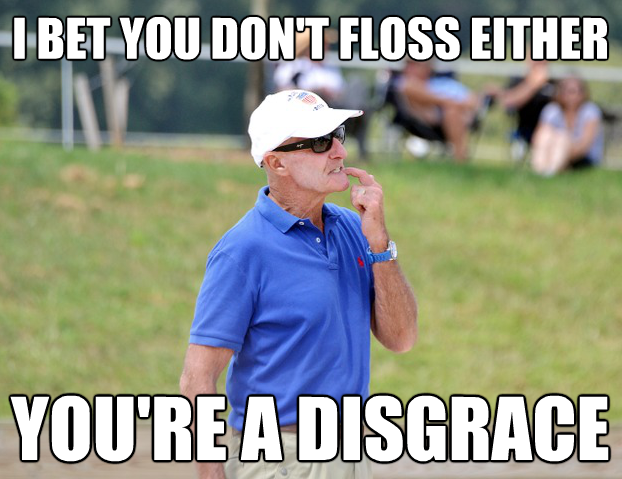 Photo and caption by Jenni Autry

Last night, I had a convoluted dream in which I was teaching lessons and had to keep telling my students’ families to stay out of the arena for their safety, only to be ignored. I lost my voice from yelling, and in my anger I drove to a nearby restaurant at which the only menu item was something called “George Morris Pie.” I think it was supposed to be a shepherd’s pie of some kind. I tried to order the George Morris Pie, but I had lost my voice, and the server informed me that George Morris didn’t serve pie to just anyone.

What does it all mean? Your guess is as good as mine. In the meantime, check out Horse Nation’s “Common Equestrian Anxiety Dreams, Interpreted.”

FEI to discuss presidential remuneration: The FEI will hold an extraordinary general assembly on April 28th in Switzerland. They will be addressing FEI President Ingmar De Vos’ argument that the presidency should be a paid position rather than a voluntary one. Weigh in, EN. How do you think that FEI presidents should be compensated? [Horsetalk]

Cavalor Feed for Thought: It’s no secret that horses’ nutritional needs can change based on the amount of work they’re in, but did you know that their nutritional needs are also largely determined by the type of work they’re in? For instance, high-speed, high-intensity activities such as jumping and barrel racing require a diet relatively high in carbohydrates; longer-duration sports such as dressage or endurance require feed that blends carbohydrates with fats, as fats help sustain long-term energy. Read about carbs, proteins, and fats and the different ways that they fuel athletes. [Feed for Thought]

2020 Olympics reveal new/old equestrian sites: The main site for equestrian events at the Tokyo Olympics will be at Baji Koen, which was the equestrian site at the 1964 Games. “The move puts the sport into the centre of the Games, and the use of an existing facility falls in line with the Olympic 2020 recommendations on cost and sustainability,” reports Horse & Hound. While Baji Koen will be the home of dressage and stadium jumping, as well as eventing dressage and stadium, the cross-country phase will be held at Umi no Mori in Tokyo Bay. [Horse & Hound]

And now, in weirder news… Walmart has issued a cease-and-desist notice to the tumblr page Walmart.horse, which essentially just contains a photo of a Walmart storefront with a picture of a horse superimposed in front of it. Why? No one knows. But Walmart claims that by using their image and trademark, Walmart.horse is weakening “the ability of the Walmart mark and domain name to identify a single source, namely Walmart.” In response, the website’s creator argues that “his site is too ridiculous to be confused with something operated by the retailer,” and offers to add “any new animals to the page that Walmart recommends.” [Consumerist]

SmartPak Product of the Day: After a long winter of temperature fluctuations, dry weather and dark, sometimes damp tack rooms, I noticed that some of my lesser-used tack has become, well, pretty gross. Some of the leather was dry and cracked in places, while other pieces were sticky and moldy. Time for a deep cleaning! Horseman’s One Step by Absorbine cleans and conditions leather with a creamy lanolin formula that penetrates leather while leaving it smooth, not greasy.