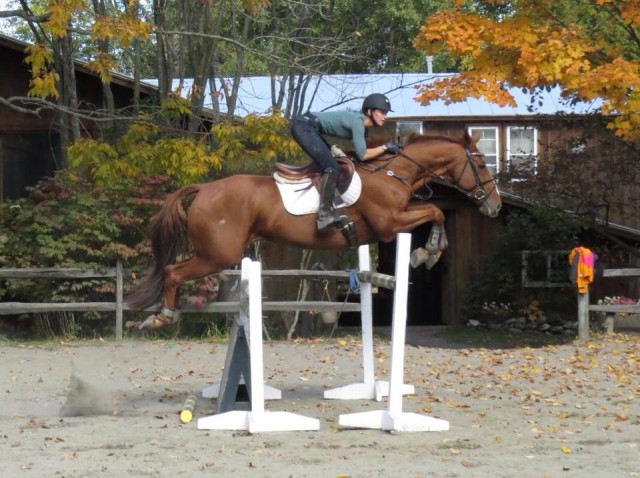 In the wee hours on Friday morning, October 10, my friend and I made the lengthy journey to The Maryland Horse Trials at Loch Moy. Looking back at my decision to enter this event, I might have been slightly naïve assuming I could tackle this level of eventing in Area 2 after only completing two Preliminary events EVER in my life. Though time passed by the opening date and my confidence on Theatre Royal, combined with several successful outings had shifted my initial trepidations.

We arrived at Loch Moy that afternoon. We drove up the serious mountain of a driveway that actually made my jaw drop only to see the most massive show jumping course I have ever seen at an event. I was thinking to myself, “That’s set for Intermediate – what will Prelim look like?”

After gasping over the height and spreads seen in the show jump ring, we were almost instantaneously greeted by the super handy man named Rex who helped us park and find our way around. He was unbelievably cheery, accommodating, and quite honestly, this single man in many ways helped set the tone for the weekend.

He made sure we were comfortable. He made sure to tell us daily that if we needed anything, anything at all, that all we needed to do was ask and we shall receive! In fact, all of the staff at Loch Moy were enthusiastic and over the top helpful, which made our weekend and our experience that much more pleasant.

Day 1:  Saturday revolved around my friend who was competing Intermediate. I didn’t compete until Sunday which couldn’t have worked out better for the two of us. I had loads of time to become familiar with my surroundings and both my show jumping and cross country courses. I watched several Intermediate riders jump several jumps that were very similar to some of the jumps on my course. This day helped prepare and settle my nerves. I actually walked my cross country course FIVE times total!

Day 2: I rode dressage at 8:30 a.m. Sunday morning and didn’t jump until 10:44. Vinnie and I made our way down to the dressage warm up. First of all I have to mention this warm up arena. Wow, was I thoroughly impressed, not only by the immense size, but the glorious footing underneath me.

How could you not feel like a million bucks riding around in this ring? Even though the atmosphere was so unfamiliar to me, I felt the energy and the intensity and was feeding off of it. I never ride around a ring with people like Will Coleman and Phillip Dutton, but there I was. Little me, who nobody knows and I felt like I was playing with the big boys…and I was!

The energy exuding from that ring must have served Vinnie and me accordingly, because we trotted down centerline and ended in second in a large Prelim division, which was extremely exciting for me.

After that was over, I felt myself going over and over in my head what I needed to do in both phases, which were back to back. I kept hitting pause and replay in my head, as if I were some computer. Even though I was reasonably nervous, I never once felt like any of this was outside the realm of possibilities for us.

I knew the tables were enormous, and the water would be tricky considering how many horses were balking at the in part of the question.  I knew the technical questions would be tricky if I didn’t hold my lines and push for the distances to happen. I knew I couldn’t gallop out of the box feeling shy or insecure. I had to take on this course with confidence and decisiveness.

I warmed up for show jumping and Vinnie felt on it. I went in the ring shortly after and got slightly deep to the first two jumps but quickly picked up the pace and jumped around clean and fast. At this point, unbeknownst to me, I was sitting in first place after showjumping. Holy cow!

After completing the biggest show jumping course of my career, I headed over to cross country warm up where I jumped a single roll top. Vinnie soared over the roll top and felt extra pumped as he knew what was coming. I had a little trouble getting Vin to go in the box as he was ecstatic to get on course. “TEN, NINE, EIGHT, SEVEN, SIX, FIVE….HEART POUNDING, FOUR, THREE, TWO….OH MY GOD I’M GOING TO DO THIS….ONE, GO. GOOD LUCK, HAVE FUN! GULP!” 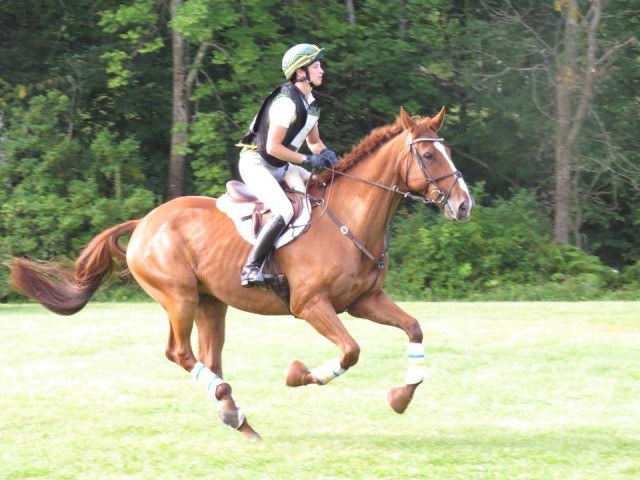 I have never had so much fun in my entire life on cross country. What a trip! This horse knows what he’s doing and is so straightforward. He gives me wings and together I feel like anything is possible. I came off cross country on a serious adrenaline rush and can honestly say I am still riding that wave of excitement and sense of accomplishment.

As for this event, I would HIGHLY recommend this event for anyone looking for a harder venue. The course had an amazing flow to it and really encouraged you to keep coming and galloping. The technical questions were tough but appropriate. The big galloping fences were just that. There was nothing small on this course. It was the real deal, particularly for someone who has limited experience competing in Area 2.

Thank you Loch Moy for being so unbelievably accommodating and cheery. Thank you so much to all those who volunteered….you guys rock! What an incredibly beautiful and awesome venue!