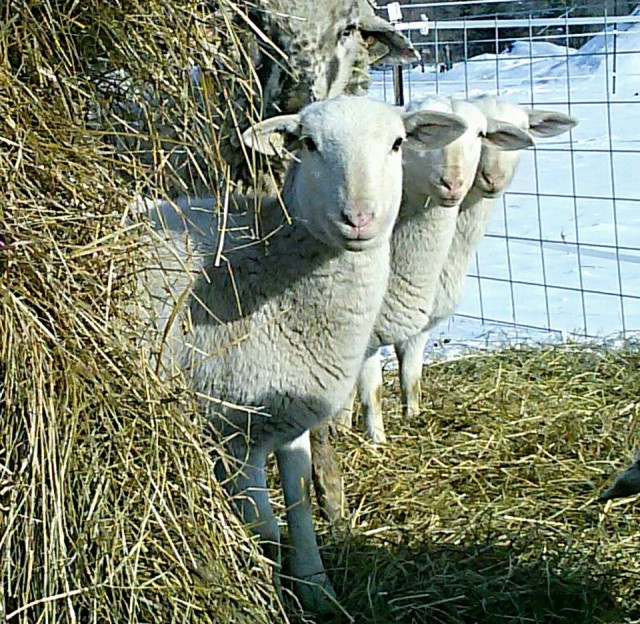 These girls are set for the cold! Hiding out behind the all-you-can-eat buffet.

At our farm, all the creatures live outside, with (of course) access to shelters of various shapes and sizes to accommodate the critters of various shapes and sizes. So when the polar vortex comes knocking, there is a flurry of activity to prepare — every pen gets new hay bales, water tanks all get topped up, extension cords checked, new bedding laid down. The hope is not to have to start a tractor, open a hydrant, carry a hose, or fix any electrical problems while it’s 10, 20 or 30 below zero. 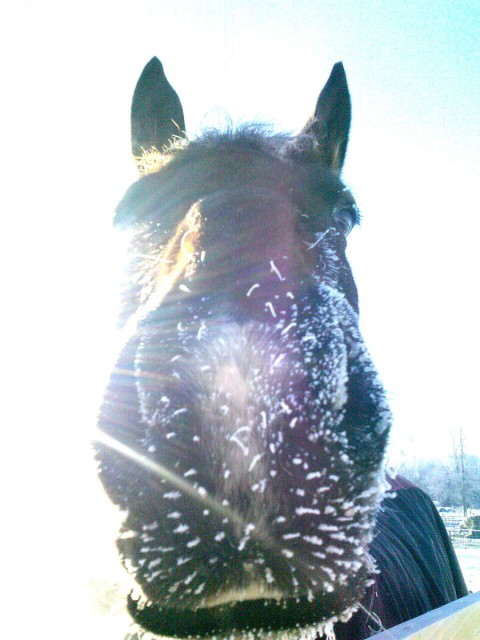 So when the last cold one hit, and the temps were forecasted to drop to around -20, my hubby and I had spent the last “warm” day doing all the aforementioned chores. The morning the vortex swirled in, I pulled, zipped, laced, stuffed and wrapped myself and headed out to feed. My husband’s family was staying with us for Christmas, and that morning was to be present opening (the idea of which excited my 4- and 6-year-old niece and nephew to no end). 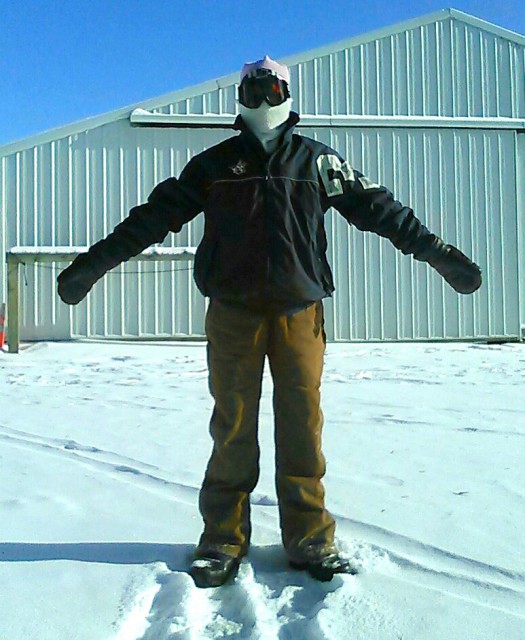 Here it comes; Murphy’s Law. Because it was 20 below, because we had family and plans for the morning, because horses are horses … as I walked out the door, I noticed the occupants of the front two paddocks engaged in a game of “touch me! touch me!” over the fence. As I watched in what can only be described as “frozen” horror, one of the old geldings put his front feet over the electric fence tape and dragged the entire thing backwards. There went all my little plastic insulators …  *pop*   *pop*   *pop*   *splinter*

Thankfully, fence tape is a forgiving beast, and no ponies were harmed in the destroying of my fence. But the fat pony in the adjacent paddock saw his opportunity and was through the new opening like a shot, cantering around in not his paddock like a kid at recess, practically sticking his tongue out at me.  Oh, naughty pony.

I think at this point my vocabulary shrunk down to only the four-letter words. I nailed that pony with a death glare and shouted something halfway intelligible at him that included phrases like “pony shish kebabs.” He must have caught my drift, because the mischievous light in his eyes turned to white-rimmed panic as he frantically ran the fence line looking for his gateway to safety. I gotta say, when properly motivated, that pony has some nice hops! He made a beautiful little foxhunter leap back into his rightful home.

Faced with about 75 feet of broken, downed, needs-repair-immediately fence line, I clumped to the barn to retrieve my fencing tub of goodies, tromped across the farm to pull the plug on the electricity to the fence, muttered some more into my facemask about so-and-so horses and ponies with no respect for what a windchill factor of -30 can do to a poor girl’s cheeks — and then I grabbed the most important tool of all: my iPod. With all my favorite Latin men on board — Enrique, Pitbull, Juanes, Ricky … hola, boys.

Most of the time around the farm you’ll find me with one earbud plugged in. Chores take on a distinctly Zumba-ish feel. There’s not much that makes mundane or repetitive chores go faster than a good soundtrack, and that frozen morning, I had a good one. Appropriately jamming along to “Bailando,” “Livin’ la Vida Loca,” “Fireball,” “Mala Gente” (though I thought “Mala Caballos” might be more appropriate … ) and “No Pare La Fiesta,” free to sing along as loud as I wanted through my face mask, I had the fence back up before my cheeks had even lost all their feeling. I think all the dancing probably helped keep the blood flowing, too. 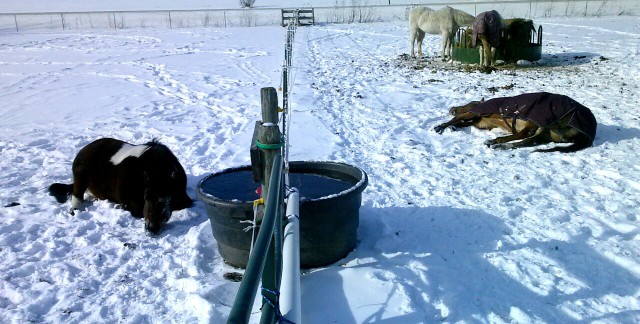 There is something very satisfying about completing a job that has a tangible outcome. Call me simple, but I think those blue-collar, do-it-with-your-hands, take-nothing-and-make-something jobs leave you with the best feeling of accomplishment. By the time I had the fence back together, clicking along with electricity, tools tucked away and ponies now calmly eating hay, any anger or frustration I had felt was completely gone. I gave the fat pony a good ear rub before letting Pit Bull’s lyrics “can’t stop me now!” take me back to the house, where my husband was waiting with what seemed like the best latté I had ever tasted.