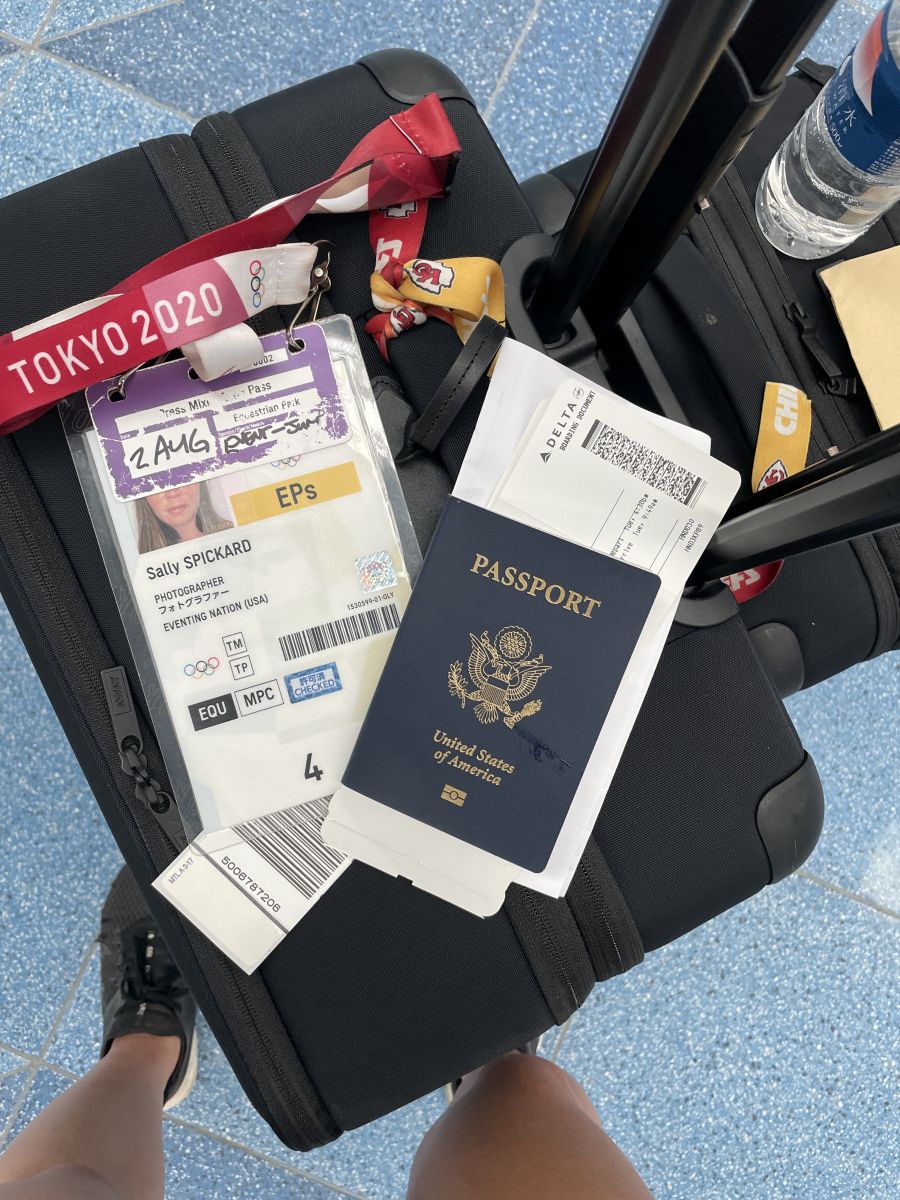 Returning from covering an event is always a bit of a crash, especially when it comes to the big five-star or international events. Everyone involved with these events works long, hard days to fulfill their duties, and equestrian media is no exception to this rule. There were at least three days during my trip that I found myself awake and working for well over 24 hours at a time. So, when coupled with the 16 hour time difference between Tokyo and San Diego, it isn’t a huge shock that it took me a few days to get back on U.S. time and take a beat to collect my thoughts from my first Olympic reporting assignment.

But what an experience it was! To be quite honest, the logistical hoop-jumping that was required to even gain entry into Japan was stressful enough that just mere weeks before departure I was questioning my sanity for attempting this trip. There was still a global pandemic in play, and numbers in Tokyo had been on the rise, with a slow vaccine roll-out to compound the situation. Would it be smarter to try to cover this remotely?

I decided to push on. I had received my vaccine in April, and Tokyo 2020 was requiring two PCR Covid tests within 96 hours of departing, plus another before leaving the airport, and daily tests for the first three days in the country and every four days thereafter. We were also required to submit specific Activity Plans detailing every place we may go during our stay in Tokyo, and contact tracing apps were installed on our phones to ensure that our movements could be tracked. In short, Tokyo 2020 was not taking any chances with the thousands of visitors coming to the Games. Athletes, volunteers, officials and other Games stakeholders had to follow similar protocol during their trip. 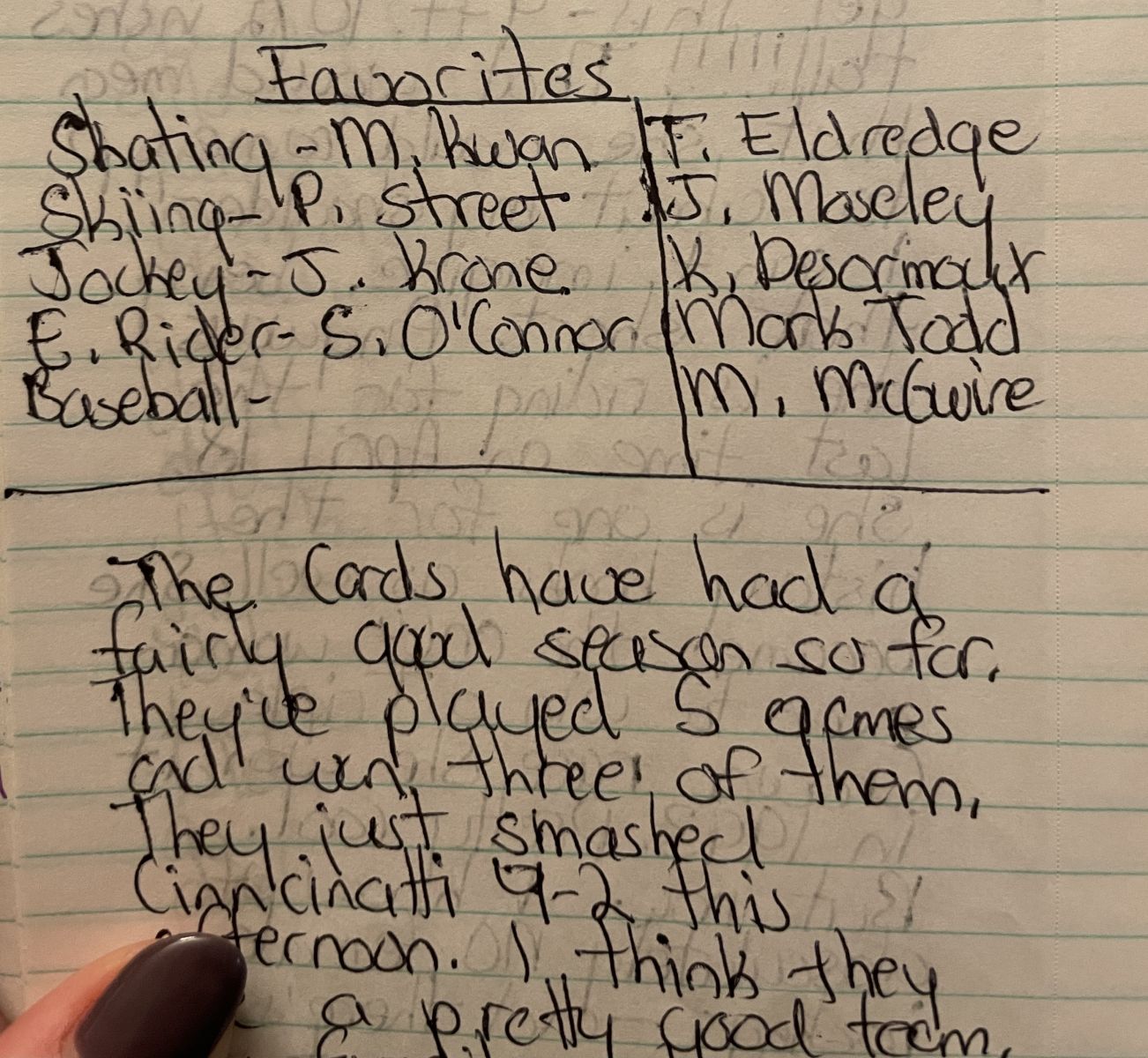 Luckily, I had plenty of support in my new friend and Chronicle of the Horse editor Lisa Slade as well as photographer pro Shannon Brinkman, who I discovered would be staying at the same official media hotel. Despite my residual trepidation regarding the trip, I took a deep breath and trusted that everything would work out the way it was supposed to.

It’s funny – a few months ago on a trip to visit my parents in North Carolina I happened upon some old diary entries from the 1990s and early 2000s. I used to follow horse racing religiously (mostly because it was what was predominantly on TV, as this was pre-internet fervor), and I would fill my diaries with “reports” on different races (it’s crazy to read my 12-year-old ramblings about Bob Baffert and know that he’s still going strong in his career) as well as whatever eventing highlights I could come across. It’s quite fitting then that now, many years later, I find myself actually writing those reports for a living. 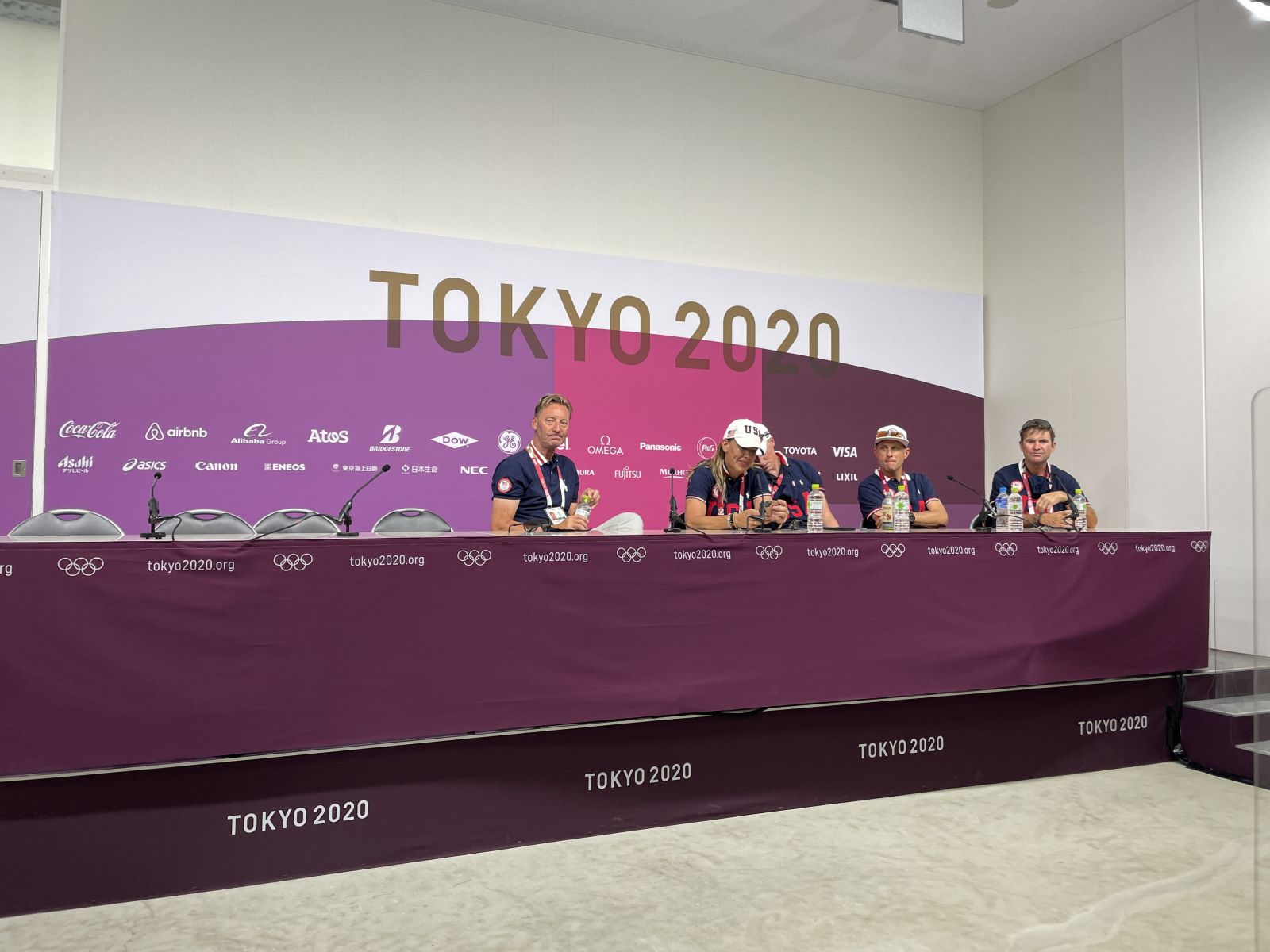 Nothing will ever quite compare to entering a cool press conference room like this.

I found I wanted to pinch myself more often than not throughout this trip. Viewing the gorgeous terrain of Japan as my flight descended into Tokyo Haneda International Airport. Being ushered through the endless maze of intake for Olympic participants after deplaning. Heading immediately to Baji Koen Equestrian Park to see the eventers doing their arena familiarization as soon as I got to my hotel. I was here, it was happening, and I couldn’t believe it.

My days were filled with endless hours spent in the mixed zone, meeting and chatting with riders with incredible backgrounds and stories to share. I do my best to keep my relationships with my colleagues and the riders very professional, but man — it’s hard not to root for the riders and horses you’ve followed for ages. 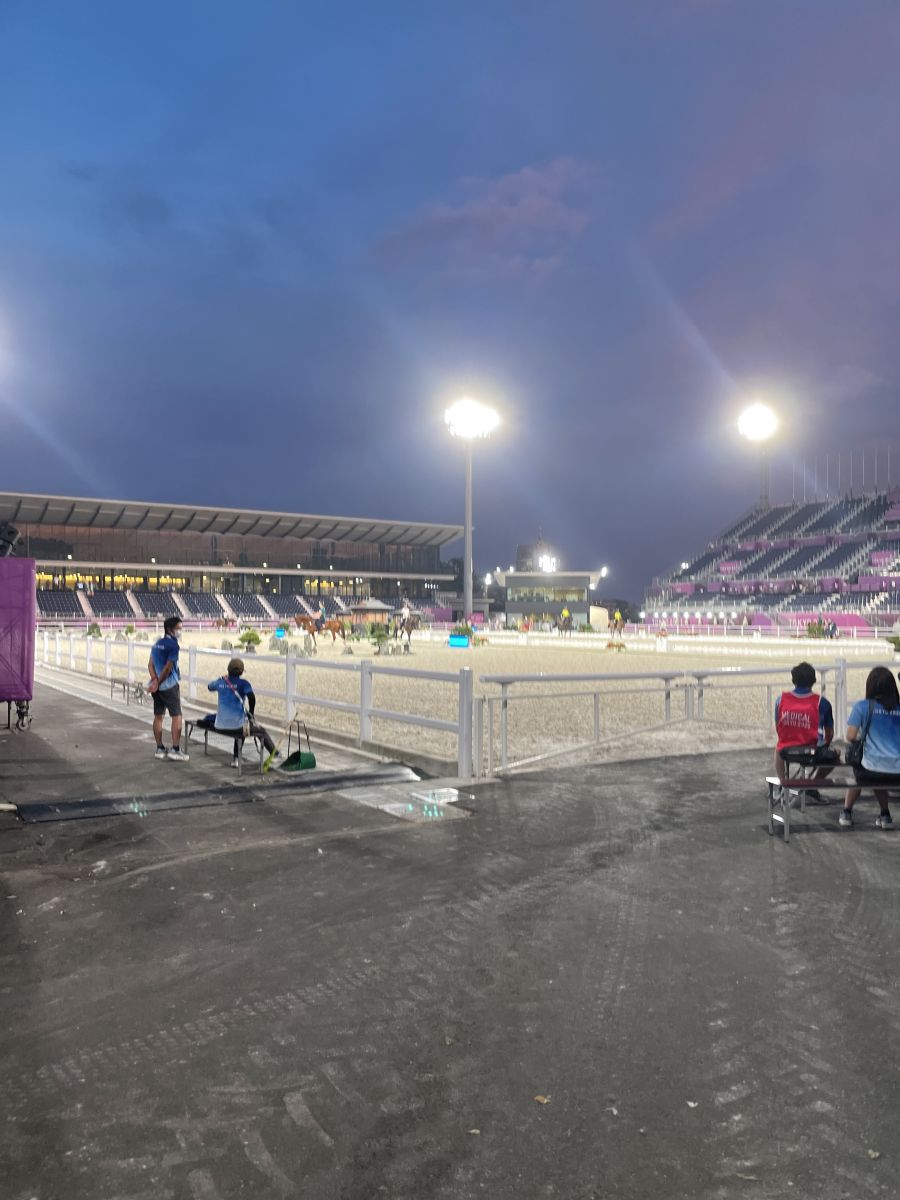 My first sighting of the grand main arena at Baji Koen! Talk about starstruck.

I wanted to become best friends with Thai rider Arinadtha Chavatanont, who’s gorgeous blue hair and classy elegance left a lasting impression on me. I got to speak with Polish rider Malgorzata Cybulska, who was incredibly heartbroken after a tough cross country day but still came through to speak with me after. I was thrilled to see her in much higher spirits on the final day, having taken some advice from her sport psychologist after cross country and deciding to carry on in the show jumping and finish her weekend on a strong note. I wept happy tears as I whipped my phone out to capture some special moments between Kazuma Tomoto and the rest of the Japanese team after he finished in fourth individually in his home country. I felt for all of the traveling alternates like Tamie Smith and Ros Canter and admired the grace they showed all week. And I felt the waves of pain from the loss of Robin Godel’s horse, Jet Set, after a devastating injury on cross country, feeling hopelessly unable to write a cross country report when incidents like these make everything pale in importance.

Spending time in Japan was also an incredible opportunity. I’ve only traveled to Asia once before, when I traveled to Korea in 2015 with an adoptee group to search for my birth family. At the gate at Seattle-Tacoma Airport, the attendant recognized me as being Korean and began speaking to me in Korean. I felt a pang in my chest borne from self-consciousness that I look a certain way but can’t speak the language or properly interact with other Koreans. But accompanying that pang was a warmth that came from being properly recognized. In America, I very often fall into the “all Asians look the same” racial stereotype, and it’s not often I’m recognized as a Korean woman. It’s even less often that I actually feel like a Korean woman, what with my omnipresent confusion on identity that many other adoptees will relate to. This recognition – “oh, you’re from Korea!” – happened several times during my stay in Japan, and while I felt plenty of internal conflict regarding Japan’s rocky history when it comes to Korea, it felt really nice to be immersed in an Asian culture for a while and to be seen, not as a white-raised American woman who looks Korean, but as a Korean woman. 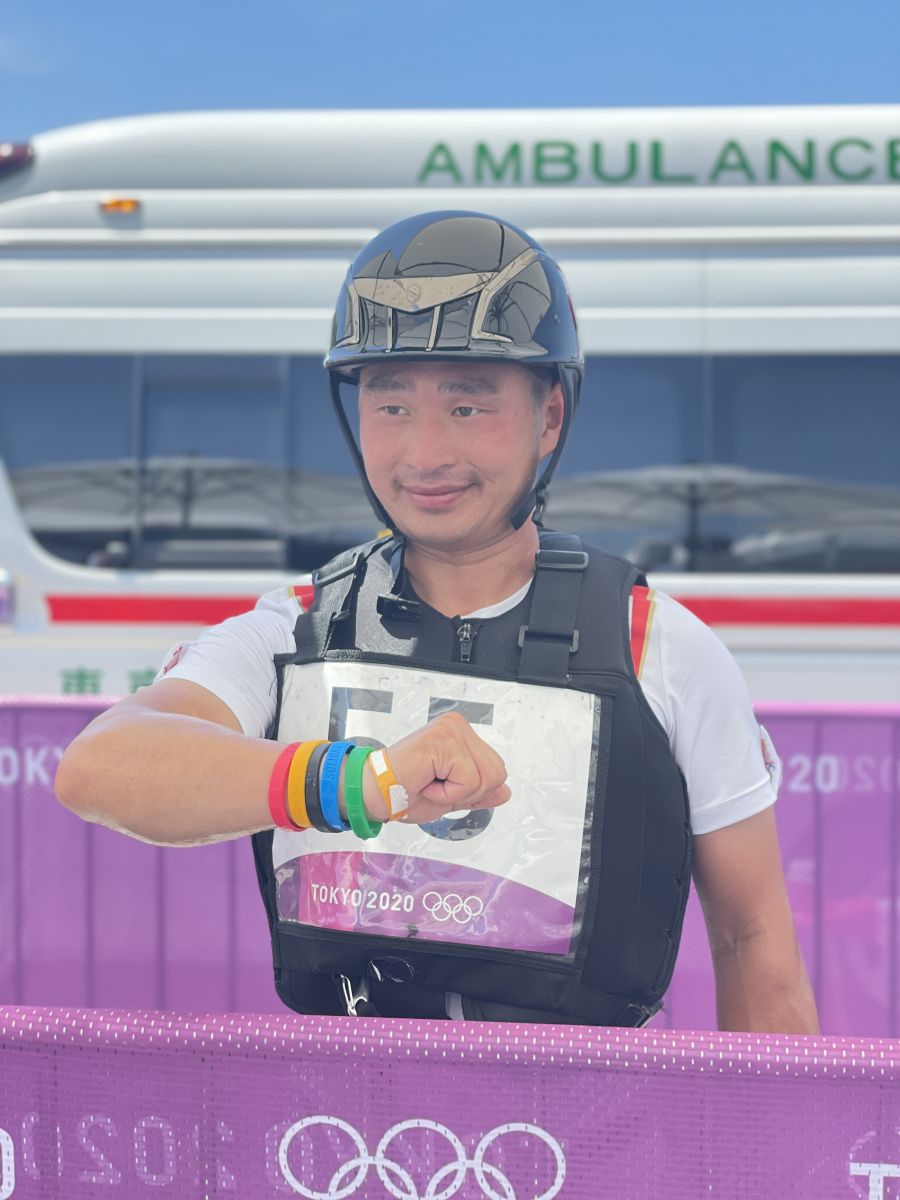 One of my favorite moments: Chinese rider Yingfeng Bao shows us the Olympic Rings adorning his wrist.

All of these emotions made my final encounter before departing Tokyo that much more special. I arrived back at Haneda airport with several hours to occupy before catching a plane back to the U.S., so I found an udon noodle stand near my gate and settled in to wait for one last delicious meal (honestly, I lost count of how many bowls of noodles I slurped during this trip). As I sat down to wait for my food, who should appear next to me other than Ellen Ahearn, who along with her husband and her daughter, Alex, owns Mai Baum. I’ve had the privilege of knowing this wonderful family for a few years after first meeting Alex when she was still competing Mai Baum herself. Alex, as I’ve written before, is a Chinese adoptee — among many other identifying facets of her life — and it’s been a point we’ve bonded over through the years.

Ellen and Alex were, as it turned out, also headed home and were on the same flight, so we settled in with our noodles and tempura to catch up. It’s very strange to have someone look up to you in some way — I feel like I’ve spent most of my life and career looking up to others and not thinking of myself in any way as exemplary or otherwise special. But when I get to spend time with Alex, talking about the idiosyncrasies of growing up as adoptees, the complications that come with these dual identities, I realize that sometimes all we need is to meet one person who shares that commonality. I remember discovering a Korean blogger who went on a birth family trip several years before I did. Among other things, she became the catalyst for me to want to open the book on my own adoption. I felt like her story resonated with me and made me feel like perhaps I could do this.

Now, talking with Alex and her incredible mother, who recognized the lack of diversity in her hometown of Poughkeepsie, Ny. and moved herself and her infant daughter to San Francisco to ensure that Alex would grow up seeing others who looked like her, I feel at home. I want to tell Alex that she isn’t alone, that someone understands — at least in part — some of her struggles. I want her to know that her being here makes me feel more like I belong.

When I think about it, it’s one of the things I love the most about the Olympics. No matter who you are, where you came from, where you screwed up, or how magnificently you failed, it’s likely that there is someone at the Olympics who will resonate with you. Someone who will make you feel like you do belong, in whom you can see a bit of yourself. And for me, more than the gold medals or the podiums or the personal bests, that’s the beauty of sports and the community they create. I feel lucky to have gotten to be a small part of this Olympics, and with any hope, somewhere out there another eventing-addicted kid is picking up a pen, opening their journal, and writing their very first report on the sport they love. 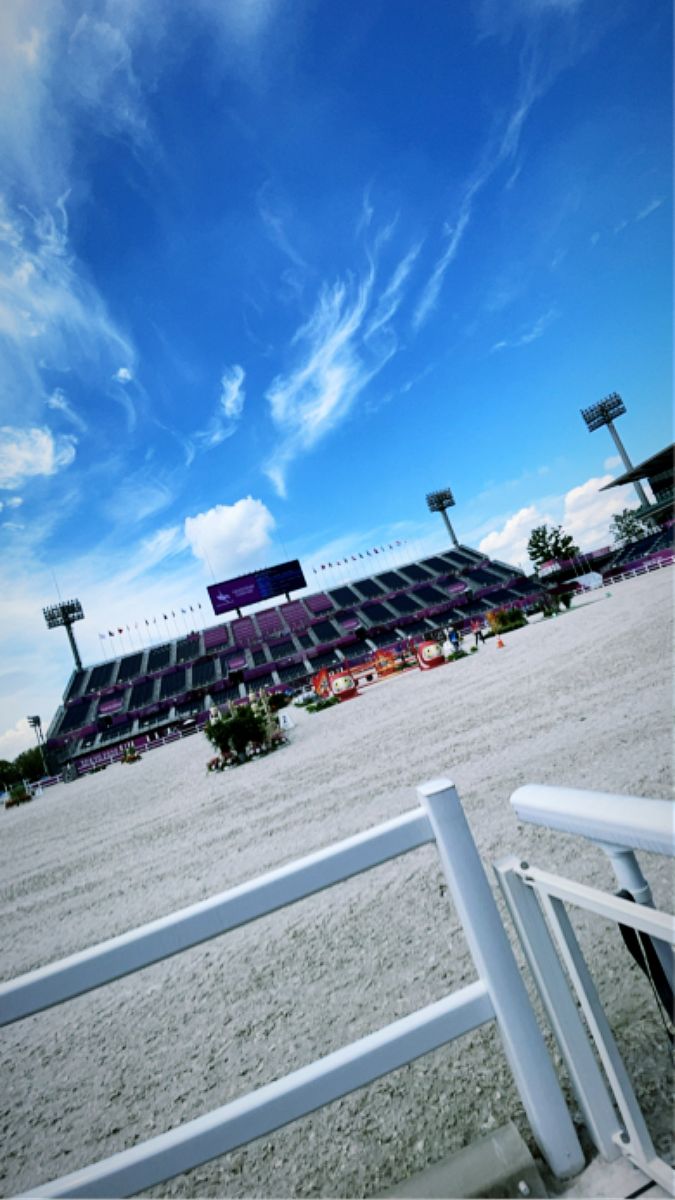 Until next time, Tokyo!