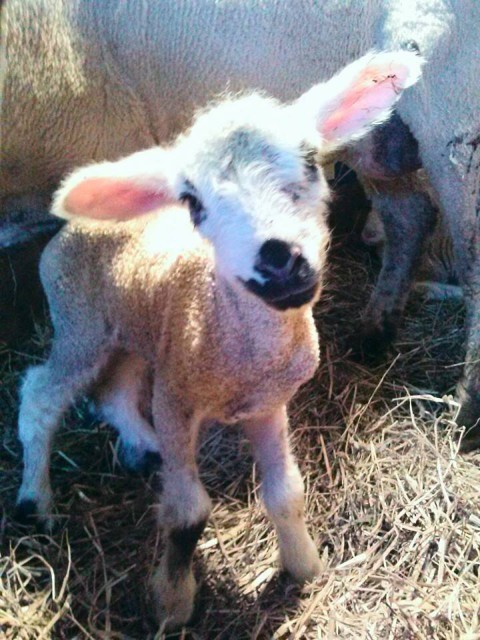 Meet Charm. Possibly the new love of my life.

Springtime on a farm usually means babies, and in my case, it’s lambs. Teeny, tiny baby sheeps whose squeaky ‘baaa’s can keep me mesmerized for hours at a time.

Over the years I’ve gone from the ‘oh-my-god-what-am-I-doing?’ approach to lambing to ‘I-have-a-kit-ready-in-the-barn-BRING-IT!’. And yet, I still manage to get caught in the wrong pants sometimes. 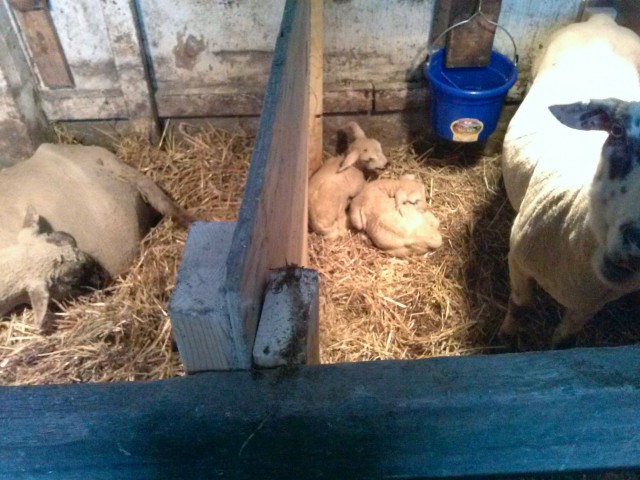 Our ‘ladies’ (ie – the 22 enormously, uncomfortably pregnant ewes) have been looking like they may lamb at any moment for a couple of weeks now, keeping my husband and I both on the edge of our seats doing late-night and early-morning checks. And for several weeks our frequent flock checks were met with quiet, cud-chewing sheep who were decidedly NOT giving birth.

Last weekend I rode in a dressage clinic, and on Sunday I put on my flashy new breeches, belted in my shirt and made a valiant ‘DQ’ effort to look pretty and put-together. Upon arriving home, I unloaded my mare and turned her out so she could have a good roll and talk to her boyfriend. And then I made a mistake – I went to do flock check BEFORE changing out of my pretty, shiny new breeches.

One of our original ‘Fab Four’ ewes was far enough into labor for two miniature cloven feet to have made an appearance. I put her in a lambing pen and gave her some space and time, eventually gloving up to give what ended up being a fairly large single ram lamb a little pull on the way out. Within ten minutes he was standing, bleating, nursing, and waving his little tail.

I hung a water bucket, fluffed some fresh straw bedding, gave his mom another flake of hay . . . and looked down to see all kinds of unidentifiable birthing fluids in various Picasso-esque splashes on the aforementioned sparkly new breeches. Maybe time to put a pair of scrubs in the lambing kit? 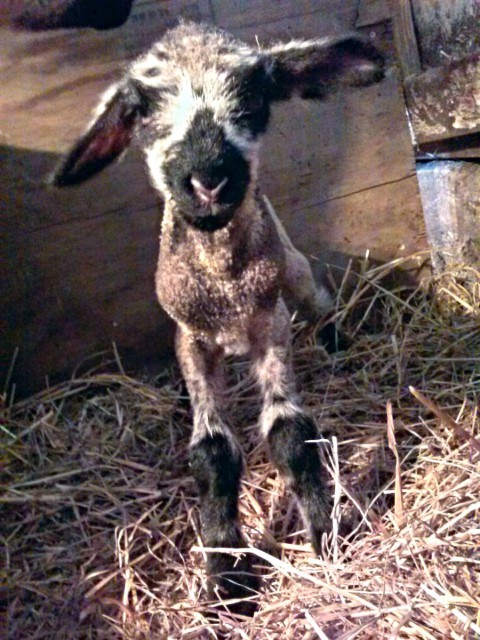 Still wet and a little floppy.

Three days later I was smart enough to actually put ON the pair of scrubs to help our oldest ewe, Lula, with her twins. She has a dropped uterus, so has a hard time pushing and does better with a little ovine obstetric assistance. In my scrubs, Airwalks, and shoulder-length AI glove, I made a strange-looking but VERY enthusiastic sheep midwife.

The plan was to deliver Lula’s tiny bundles and then take my mare to the field for gallop day (!). When the twins were delivered, breathing, flopping around like frogs trying to stand for the first time, and being zealously scrubbed over by their mom’s tongue, I figured it was time to change into breeches and grab the stud kit. 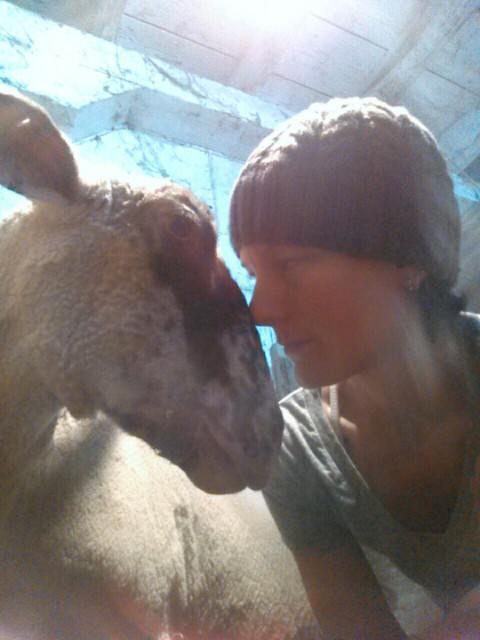 Lula and I. This baby thing requires some serious concentration.

On the way back to the house I detoured around to pass by the sheep pen one more time . . . and noticed another ewe fairly far into labor. More tiny feet! My mare was standing just on the other side of the fence, which made a somewhat ironic tableau. 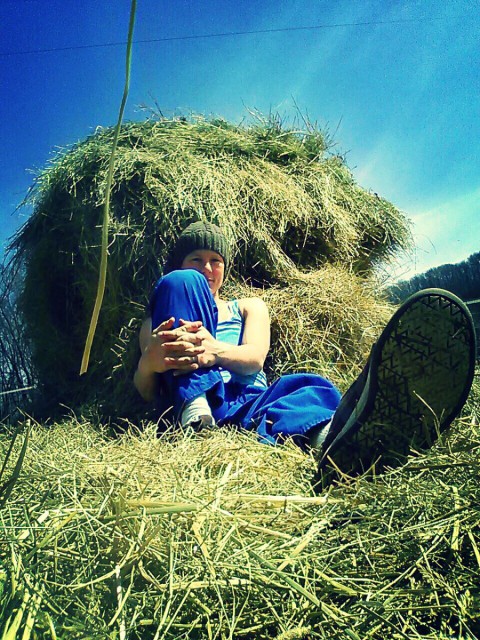 Playing the waiting game’s not so bad in this weather.

I plonked myself in the hay to play the waiting game. and after about 45 minutes it was pretty clear something was a little stuck. This particular ewe is a bit more skittish, so there was some roping involved (note to self: time to brush up on roping skillz).

Once the ewe was installed in her lambing pen and another glove was attached to my arm, all that was needed was a little rearrangement of one front leg to bring everything around into alignment and within ten minutes there was another set of twins on the ground. The level of pint-sized baa-ing going on in the ovine maternity ward right then would have made even the toughest cowboy swoon. 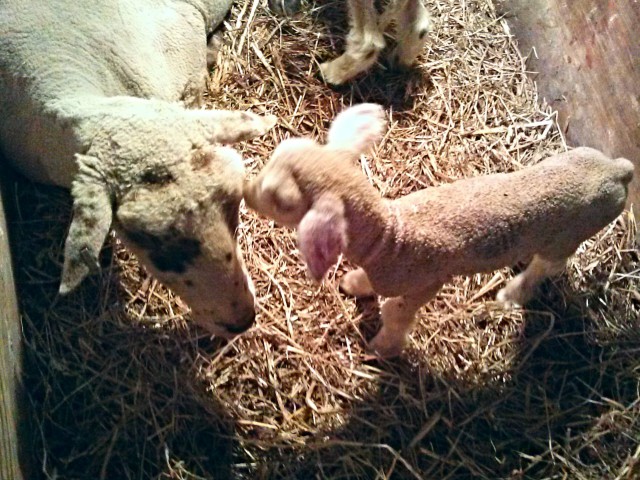 I grudgingly peeked at the rest of the flock out of one eye. I was momentarily panicked by one gigantic ewe laying in a funny position, but in the next moment she burped up a ball of cud and started chewing away, so I took off for the house at about 150 mpm, shucked my encrusted scrubs directly into the washing machine and jumped into my breeches on the fly out the door. 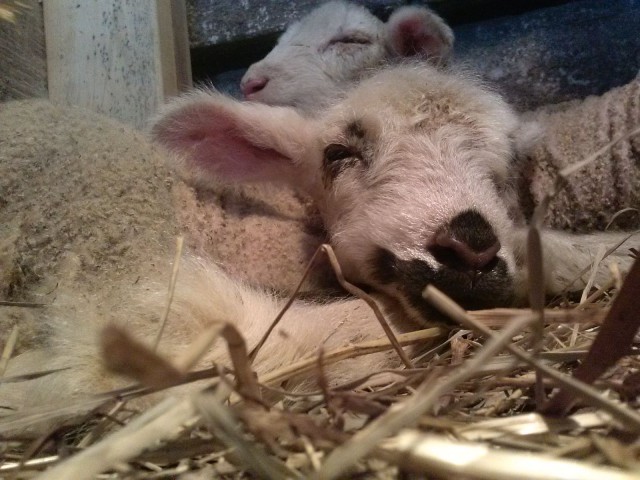 Being born is awfully hard work.

Within half an hour I was out in the hay field on my mare, doing more like 450 mpm in the glorious sunshine with the wind whistling past our faces. Laughing. There were several tiny, healthy lambs and their satisfied moms back in my 140-year-old barn, snug under heat lamps and cuddled up in some fluffy piles of straw.

The Wisconsin winter had faded away to the kind of spring day that infuses high spirits in everyone, and my girl and I were both riding the crest of the wave across that hay field.

The first baby out exploring his new world: