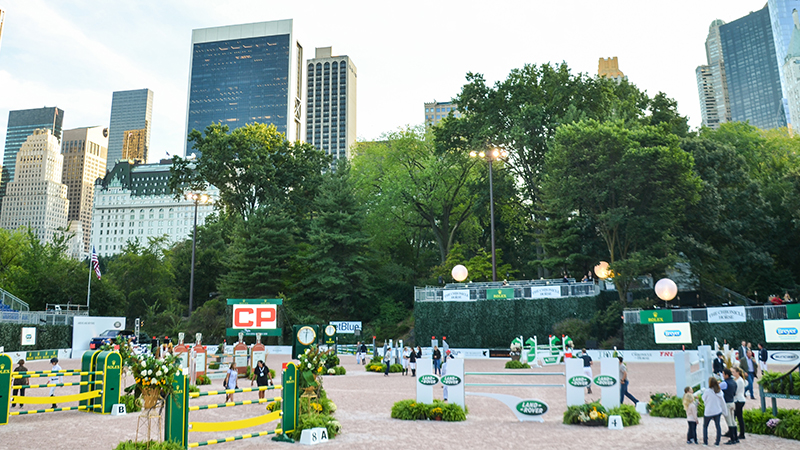 A stacked entry list has been announced for the U.S. Open $50,000 Arena Eventing Team Competition to be held Saturday, Sept. 23 at the 2017 Rolex Central Park Horse Show. The class was a brilliant seat-of-the-pants (read: eventer approved!) move from the show’s organizers, who found themselves in a pinch after the dressage CDI component of the event was canceled due to unexpected horse and rider withdrawals.

The following rider teams are scheduled to compete in the class:

The rules of play:

The teams will be named after significant New York City locales and compete against each other in a speed competition against the clock. Each team will position themselves in the ring at the same time and participate in a relay-based speed competition, where riders will move through a course themed after iconic New York City fixtures, and what will include a soon-to-be-iconic “Big Apple” jump.

The top six teams, based on cumulative time from round one, will then compete in the final “money” round for the overall $50,000 in prize money, which they will split based on final rankings in the second round speed competition. The competition will run with a faults-converted format, adding two-seconds to a team’s overall score per jumping fault. The winners of the competition will earn the title of U.S. Open Arena Eventing Champions.

“As an organization, we always try to inspire new and creative ideas to engage and introduce equestrian sport to a broader audience. The competition, which we have termed Arena Eventing Pairs, is a derivative of Arena Eventing and will be new to both equestrian sport and the Rolex Central Park Horse Show,” says Mark Bellissimo, CEO of International Equestrian Group. “Eventers bring a new dimension to the show and it is a great opportunity for the riders to shine against the incredible New York City skyline. We anticipate a fun-filled, action-packed evening for both our competitors and spectators.”

This “soon-to-be-iconic ‘Big Apple’ jump” sounds like something EN is going to need to check out in person, and you better believe I’ve already got my plane ticket!

Tickets are $50 and available for purchase here.

The Rolex Central Park Horse Show (Sept. 20-24) is in its fourth year of operation at Wollman Rink in the heart of New York City’s Central Park. In addition to arena eventing, the week will feature U.S. Open competition for the Arabian, show jumping and hunter disciplines, as well as host its popular Family Day on Sunday, Sept. 24. For more information visit www.centralparkhorseshow.com.