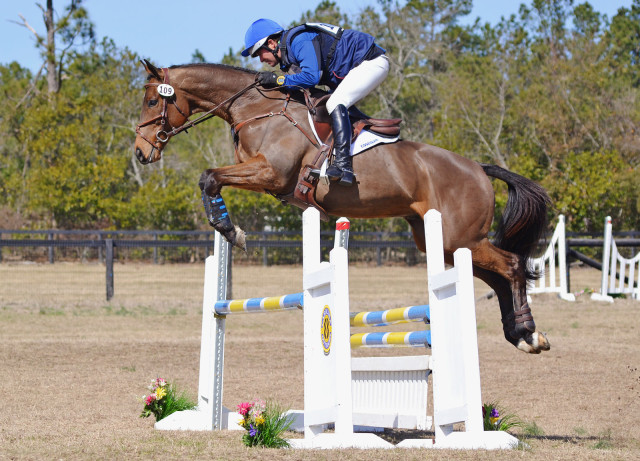 It’s been a busy Friday the 13th for competitors at events around the country today, with competitors opening the pipes at Paradise Farm in Aiken, Rocking Horse in Ocala, and Fresno in California.

At Paradise Farm, many were likely remembering the Polar Vortex of 2014 while soaking in the sunshine in Aiken. Phillip Dutton and Jan Byyny are the Open Preliminary winners. Phillip and Fernhill Singapore took home the win in the Open Prelim A division with a score of 27.5, the only pair to finish below 30 penalties. Jan Byyny and Jolliyat also secured a score in the 20s — 28.4 — to take home the win in the Prelim B division.

Taryn Nolte and Quinn earned their highest finish at this level to date with a second place on a score of 34.4, moving up from ninth with just 1.2 time penalties across country. Peter Barry and Kalle 86 round out the top three with a score of 35.3, a picture of consistency for this pair with three top four finishes so far this year.

Ryan Wood and Fernhill Flame picked up the Irish Sport Horse gelding’s highest finish at Prelim today with a second place on a score of 30.9 in the B division. Phillip Dutton and Moycullen, complete the top three for the B division with a score of 33.2. This is Moycullen’s first Preliminary event, and a solid placing likely marks the first of many starts at this level.

Familiar face Icabad Crane was also competing at Paradise Farm, preparing for a move up to Preliminary with a third place finished on his dressage score of 28.6 in the Open Training A division. Boyd Martin took home the win in this division aboard Santos, whom he purchased after Galway Downs last year, where Erin Kellerhouse piloted the horse in the T3D. Santos is jointly owned by Gloria Callen and Ron and Densey Juvonen and is an exciting new ride for Boyd this year. 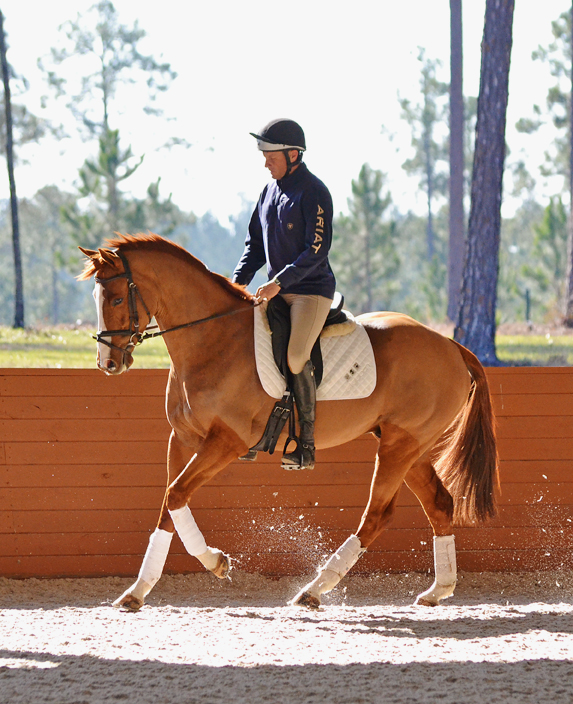 Rocking Horse Winter II was also in full swing today. Multiple top horses and riders were out stretching their legs for their first Advanced run of the new year, and many others were stepping up a level to the “big A.”

There are two Advanced divisions running at Rocking Horse this weekend, and it’s Buck Davidson and Ballynoe Castle RM sitting pretty atop the Advanced A division after show jumping with a score of 24.6. Buck said at the beginning of the year that he and owners Carl and Cassie Segal have no expectations for “Reggie” this year, as he’s more than proven his worth. At the end of the day, the 14-year-old gelding loves to compete, and he’s showing his eagerness to get back on the field so far this weekend.

Madison Park will take second place into tomorrow’s cross country competition with Kyle Carter in the irons, earning a score of 28.4 today. The top two are the only pairs to crack into the 20s in this division.

Buck Davidson, ever the busy man, also holds third place with Copper Beech, who is coming off of a sixth place finish in the Intermediate at Rocking Horse I last month. “Sean” earned a 30.0 in the dressage and added no penalties to his score in the show jumping.

Rails and time were a factor for roughly half of the Advanced A division, and reports on social media are that the course was definitely a true test for keeping the horse’s on their toes.

In the Advanced B division, it’s a girls’ day out Lauren Kieffer and Meadowbrook’s Scarlett in first place overnight on a score of 28.2, the only pair to take a score in the 20s into cross country. This is the 8-year-old Thoroughbred mare’s first Advanced start, and both Lauren and owner Marie Le Menestrel will be thrilled with the solid start to the weekend.

In second place in the B division are Buck Davidson and Petite Flower, who broke a tie for fourth place with a double clear show jumping round to take a total of 34.3 into tomorrow’s cross country.

Third place belongs to Jon Holling and Zatopek B, firmly in the hunt on a score of 35.9.

Other notables in this division include Selena O’Hanlon’s Foxwood High and Bellaney Rock, out for the first time since WEG and Rolex last year, respectively. Selena is back from her collarbone injury sustained during indoor eventing competition this weekend, and she’s currently holding fourth and sixth place with her two rides.

Several other household names are out stretching their legs in the Open Intermediate divisions, which completed today. Sharon White and Wundermaske made big moves up the board in the A division, moving from 11th to first after the quickest cross country round. This pair finished on a 36.9 for the blue ribbon. Go orange!

Cody Sturgess and Imperial Melody finished hot on Sharon’s heels with a score of 37.0, picking up 2.4 time on cross country. William Hoos and Brookfield Cult King held steady in third position throughout all three phases, ultimately finished on a final score of 40.4.

Fan favorite Manoir de Carneville took it easy in his first event of the season, picking up the win in the Open Intermediate B division with a final score of 27.4. Tate has been on vacation after his solid efforts at WEG last year, and Sinead will be thrilled to have her partner back in action.

Buck Davidson and Wiley Post picked up the quickest cross country run of the division with just 1.2 time penalties to finish in second on a score of 32.5. Reigning Lady Rider of the Year Lauren Kieffer and Veronica slotted into third place with 8 time on cross country for a final score of 33.6. This pair scored an impressive 25.6 in the dressage to take the early lead.

Over on the West coast, Matt Brown and Happenstance picked up where they left off, leading the CIC2* at Fresno after dressage on a score of 40.6. This is Happenstance’s first event back since completing the CCI2* at Fair Hill in the fall, and Matt’s got his eyes on the Pan Ams this year with his string of talented horses.

Bea di Grazia and Lad’s Night Out are in second overnight with a score of 41.5, followed by Heather Morris and Charlie Tango. Charlie Tango is coming off a second place finish in the Intermediate at Galway downs last month.