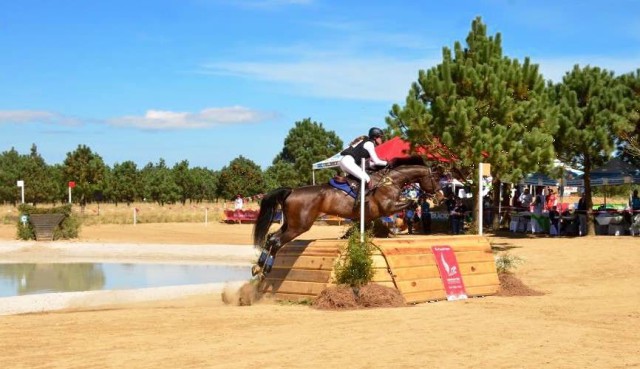 Stefanie Brand and Claudius. Photo via Stefanie on Facebook.

Guatemalan rider Stefanie Brand is awaiting surgery to repair a broken collarbone after suffering a rotational fall on course at CHC International yesterday. Stefanie and her 13-year-old Holsteiner gelding, Claudius, got tangled up at fence 7, a corner combination on the Intermediate course.

Barry Tomason, who was grooming for Stefanie this weekend, has been in touch with Stefanie’s parents, who are waiting with her at an Atlanta area hospital for surgery. “They are all very thankful for the emergency response,” he said. “Everything was handled correctly and quickly. She was wearing an air vest, and the medical staff are certain it kept things from being much worse.”

Claudius was uninjured in the fall, which coach Peter Gray says looked as if the pair misjudged their line. Stefanie has only been in the U.S. for a couple of weeks, working with Peter as she prepares for the Pan American Games. Representing Guatemala, Stefanie and Claudius were the individual gold medalists at the Central American Games in 2014.

Stefanie had her sights set on Bromont as her final prep for Pan Ams in Toronto, and her plan was to only run a portion of the cross country at CHC International as a refresher to get acclimated to U.S. eventing. For now, her plans for the Pan Ams are on hold. “She wants to be Boyd Martin and be tough and suck it up,” Barry said. “And we all hope she will make it back in time, but that’s all on hold right now.”

We wish Stefanie a speedy recovery and are thankful that Claudius is resting comfortably as he awaits the return of his rider. We’ll provide more updates on this story as they become available.