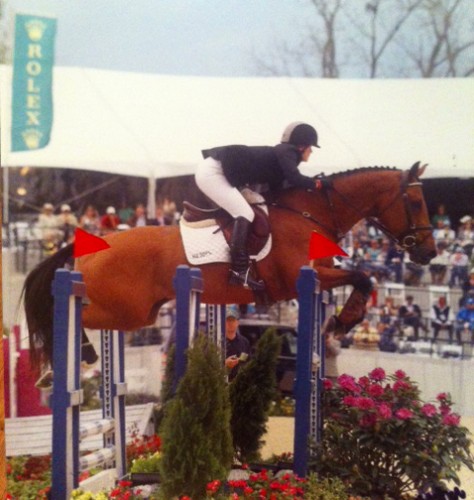 We’ve followed along with Steph Rhodes-Bosch’s diligent effort to bring her upper-level partner Port Authority back to competing at the highest levels of the sport after he sustained an injury in the fall of 2011. She announced via her blog this week that while he successfully returned to competing this summer, his suspensory just isn’t going to be able to handle the stress of the upper levels, and she’s decided to retire him.

Steph and Ollie are well known here on EN for their incredible 2010 season, during which they helped Canada win a team silver medal at the World Equestrian Games and placed ninth individually, as well as garnered a fifth-place finish at Rolex. We can only imagine what a difficult decision this was for Steph to make, and we’re sending Ollie our best wishes in his retirement.

My lovely, wonderful superstar Port Authority had such a great time at Surefire and Maryland HT this summer. It is such a treat to be out there on a horse like him. I was absolutely devastated when I broke my foot because I saw our fall season and our plans to qualify for the 2014 WEG disappear into thin air. Turns out though, that “Ollie” may have enjoyed his outings, but despite the fact that he was 100 percent sound after MDHT, his suspensory didn’t enjoy the runs as much as we would have hoped.

After a long, two-year process of treatments and rehab and very careful management, we have made the decision to retire him from upper-level eventing. Battling with a suspensory injury in an aging equine athlete totally sucks, and in many ways, it is a relief to be done with the attempt to return to the international scene with him. He has proven that he will hold up to a heavy work load in good arena footing, so we will only do what he can handle, and he should have another few years of fun work ahead of him.

I owe this horse so much; he is the reason that I have clients and students and fun young horses to ride, and he is the reason that I moved out east and have built a life that I love. I have had a few months to come to grips with the fact that I have gone cross country for the last time with this phenomenal athlete, and nobody can ever take away any of the experiences he has given me.

I am so grateful that he has no idea that he is physically limited; he was not lame, nor was he positive to flexions or palpations on the day of the fateful ultrasound (conveniently, the day after I broke my foot). I am also so thankful that we decided to ultrasound even though he looked so great. A lot to be said for conscientious veterinary care! I owe Dr. Ober  a great deal for her management of this horse through his CCI3*s and 4*s , and also through his injury and subsequent rehab.

We as a team are very proud of this horse, and I’m excited to see what the next chapter of his life holds. More info about him will come as we make decisions about his future, but as of today, he is still sound, happy and loving life in some moderate work with a big, old belly.