Arthur Tateishi partner with Eventing Canada[!] to host a Blythe Tate clinic at Pommele Acres in Tottenham, Ontario, earlier this month. Stephanie St. Pierre was kind enough to send in a wonderful clinic report. Remember to send your clinic reports, video and photos at [email protected]. 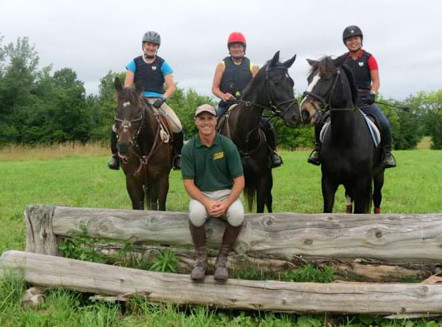 Ontario riders had the opportunity to ride with master horseman and eventer Blyth Tait earlier this month. The clinic was organized by Arthur Tateishi and Eventing Canada[!] and ran at the lovely Pommele Acres in Tottenham.

Blyth has long been a part of the New Zealand event squad, which dominated international eventing through the 1990s. He is based in England. He needs little introduction in the eventing world, but just a few of his career highlights indicate his great experience and depth of knowledge:

Blyth retired after the Athens Olympics in 2004 and returned to New Zealand to train racehorses. He was team manager for the New Zealand eventing team at the 2006 World Equestrian Games and the 2008 Olympics.

In early 2011, Blyth came out of retirement and is again competing actively.

As well as being a great rider, Blyth Tait is a natural teacher and an excellent clinician. At Pommele Acres, he was fully engaged as he worked with each group and was really generous with both his encouragement and advice for every rider.

There were a few consistent concepts that came into play throughout the clinic.

The Canter: Blyth talked about the three canters one needs in both show jumping and cross-country riding. He defined them as:

Impulsion: He described as “contained power” — needed in all three gears of the canter. He encouraged strong impulsion toward oxers and uphill jumps by softening the hand and using the leg to move up to the jump and then, in his words, “sail over it like a bird.”

Steering issues: Blyth was particular about riding the correct line to get to the middle of the fence. He also noted how the turns before fences affected the impulsion and the canter. Coming through a short turn to an oxer, he recommended riders flow through the turn, as making it too square resulted in a loss of impulsion. Conversely, a square turn helped create a more “sneaking around” canter helpful toward a vertical plank jump.

Rider position: Blyth encouraged a light seat and a still upper body. Riders sitting heavily on their seat needed to find their weight in their leg and heel. He noted that riders sitting too far back also tended to jump too far ahead.

Normal: He encouraged riders to have a “normal” ride — i.e. the canter neither too long nor short, no dramatic changes before or after the jump, no exciting arm-flapping. High praise from Blyth was “congratulations, that was a very normal ride.”

It was a rare opportunity to train and spend time with one of the greats in our sport. Those who participated all came away with greater knowledge, some homework for the future and a smile. Special thanks to Blyth for his kind demeanor and friendly presentation. Many thanks to Arthur Tateishi and Eventing Canada [!] for bringing Blyth Tait to Ontario.