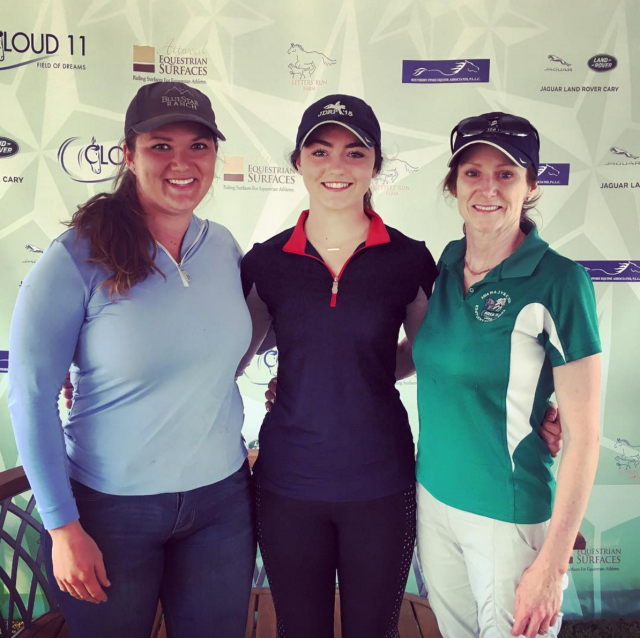 Today we salute 17-year-old Kristine Burgess, who battled the stomach flu at Carolina International to win the CIC* dressage on 38.5 aboard Roza CMF in a field of 77 horses. Kristine missed her pre-ride this morning due to relieving the contents of her stomach on the side of the road on the way to the venue, and her super groom Ali Smallpage stepped in to lunge “Rosie” instead.

“In my warm up I did a lot of medium trots to get her in front of my leg, but I was still feeling pretty sick,” Kristine said. She trains with Becky Holder, who has been helping her to “fix the slight areas where I could pick up points in the test.” Becky also helpfully told Kristine that “it was OK to throw up over the side of my horse during the test if I needed to.”

A 9-year-old Oldenburg mare owned by Kristine’s mom, Lianne, Rosie is competing in her first one-star this weekend, and Kristine hopes to gain their qualifying score at the Ocala Horse Properties CCI* next month to represent Area IV at the North American Junior & Young Rider Championships this summer.

A USEF Eventing 18 rider, Kristine is no stranger to Young Riders, having competed in the one-star championships for the past two years, riding BFF Tiara in 2014 and Regatta in 2015. She and Rosie had a good run at Pine Top last month, finishing fourth in a competitive Junior Young Rider Open Preliminary division. After Carolina, they’ll next head to The Fork, then on to Ocala and ultimately to Young Riders.

The Burgess family hails from the great state of Minnesota, and Kristine has been down training with Becky at her winter base, Windhaven Farm located in Wadesboro, North Carolina, since January. Conveniently located just about an hour from the Carolina Horse Park and The Fork Farm and Stables, Kristine said it’s been an ideal preparation for Rosie’s spring campaign. 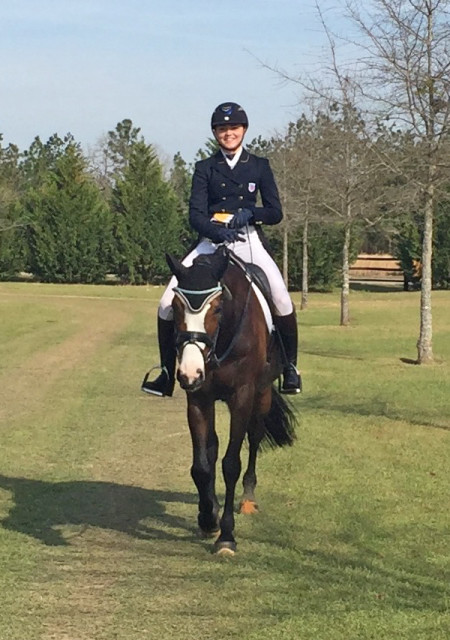 Kristine and Rosie — all smiles after their leading CIC test! Photo courtesy of Lianne Burgess.

By Rosentantz out of a Lord mare, Rosie was bred in Germany and later imported to the States as a youngster. Lianne said it was “love at first sight” when she first tried the mare, and she and Kristine have both regularly competed Rosie since they bought her in 2013 as a 6-year-old that had just moved up to Training level.

Lianne will eventually take the ride back, but for now she is fully supportive of her daughter’s Young Rider quest and said she was thrilled to see them perform so well today: “It was a beautiful test and so consistent. I was so excited.” This competition is the mare’s third outing since undergoing splint removal surgery last fall, and she’s quickly come back into form.

Kristine said she was feeling a bit better this afternoon, and chatting about her strategy for how she’ll approach Ian Stark’s new cross country course tomorrow certainly seemed to be good medicine. “It looks really fun; I’m excited to get out there and ride,” she said. “It looks like it rides pretty forward and aggressive, and she’s really good on cross country.”

We profiled Kristine on EN earlier this year, so you can click here to learn more about her. We wish Team Rosie the best of luck as they continue on at Carolina. Even a bad bout of the stomach flu can’t keep a good eventer down! Click here to view the rest of the CIC* scores. Katie Lichten and RF Luminati sit in second on 39.4, with Makenna Rold and Fernhill Imperial in third on 40.1.

If you’re just tuning in to EN, don’t miss this social media roundup with behind-the-scenes photos from #2016CI, and you can also few plenty more photos from the day on our Instagram. Click here to view all of EN’s coverage so far, and don’t miss the full report from the CIC3*, which currently has a three-way tie for the lead after dressage. Go Eventing. 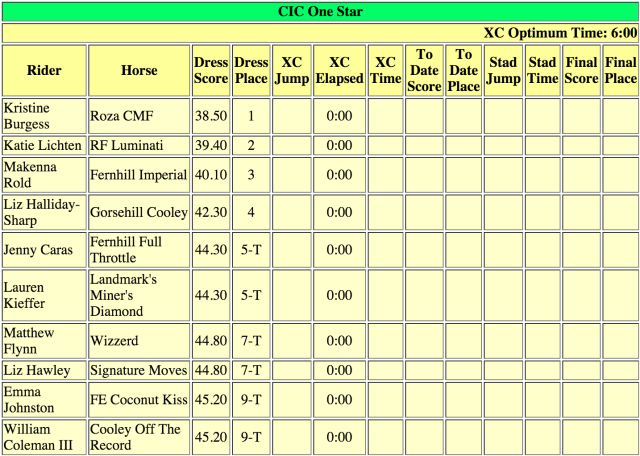