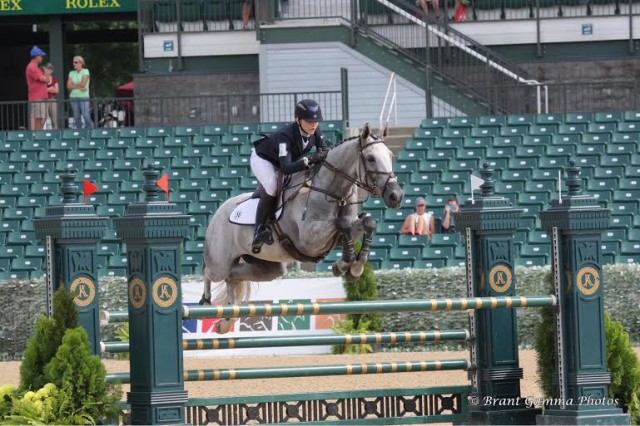 Kristine Burgess and Regatta at NAJYRC in 2015. Photo courtesy of Brant Gamma.

It’s never easy to grow up riding in an area that isn’t saturated with eventing. Kristine Burgess, a Minnesota native, knows this quite well, but it hasn’t stopped her from shining as a young talent of the sport through hard work and consistent results.

Kristine first began riding when she was four, joining Pony Club at the age of six and thereby getting her introduction to eventing. “At that age, I looked up to riders doing Training level,” Kristine said. “I never imagined doing that level and beyond.”

It happened, though, and she looked through the ears of both BFF Tiara and Regatta as she tackled her first FEI events. BFF Tiara, a 13-year-old Thoroughbred cross mare, was campaigned by Kristine through the CCI1* level. Together they finished in the top 20 individually at the FEI North American Junior and Young Rider Championships in 2014, Kristine’s first appearance in Kentucky.

BFF Tiara has since moved on to compete under a different rider, and now Kristine focuses on Regatta, an 8-year-old Thoroughbred/Oldenburg mare. This pair began their partnership in 2014, competing all over Area IV as well as circulating on the East coast. They also took a spin at NAJYRC in 2015, finishing 26th overall in the CH-J* division.

“We purchased (Regatta) from Ann Bower, who is the owner of the barn that I board at,” Kristine recalled. “‘Gretta’ had been at our barn since she was quite young, but I never thought she would end up being my horse. I took her to her first Training in May of 2014, and I knew that she was special.”

“She’s extremely brave and talented in the jumping phases but can be quite a challenge in dressage. Although we have made leaps and bounds in our training, she is still quite a sassy opinionated horse, but I don’t think that I could love any other horse as much as I love her.” 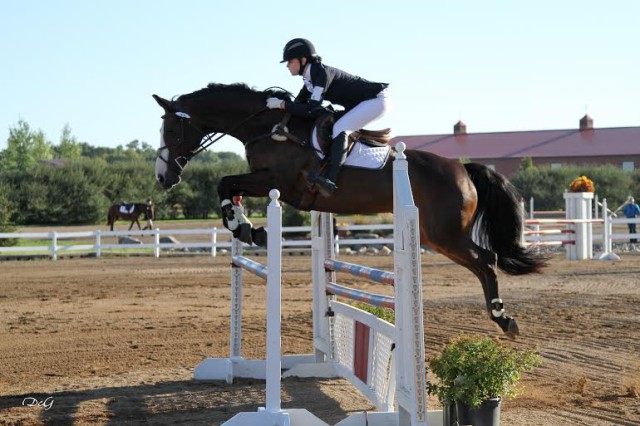 As the E18 training sessions get underway this week, we’ll see Kristine with her mother’s horse, Roza CMF or “Rosie.” “Gretta is currently at dressage bootcamp with Adam Steffans,” Kristine explained. “She’s doing so well right now that we talked to Leslie (Law) about keeping her in this program for another month.”

While Gretta spends more time in dressage camp, Kristine will saddle up Rozie, a 9-year-old Oldenburg mare whom Kristine previously competed before she sustained an injury. She has since recovered and is “ready to put her big girl pants on for E18,” as Kristine puts it.

When the E18 training lists were announced, Kristine couldn’t quite believe it. “I was so excited when I saw that my name was on the list that I didn’t even know how to react,” she said. “Once I read through the other names on the list, I was ecstatic to see that my roommate from Becky Holder’s and great friend, Makenna Rold, also made it onto the list. We called each other nearly in tears out of excitement.”

Looking ahead to the upcoming week and beyond, Kristine is hoping to work on improving her flatwork and also getting a good handle on Leslie’s strategy for riding the technical elements of the jumping phases. For Gretta, Kristine wants to become “more consistent in the dressage ring.”

“I’d also like to hopefully make our first Intermediate debut. If this season goes well, I would love to aim for the two-star level at the end of this year or next year.”

As an Area IV member myself, it’s great to see some familiar names on the roster for this year’s E18 sessions. Good luck to Kristine and all of her teammates as they head down to Florida this week for their first session with Coach Law.