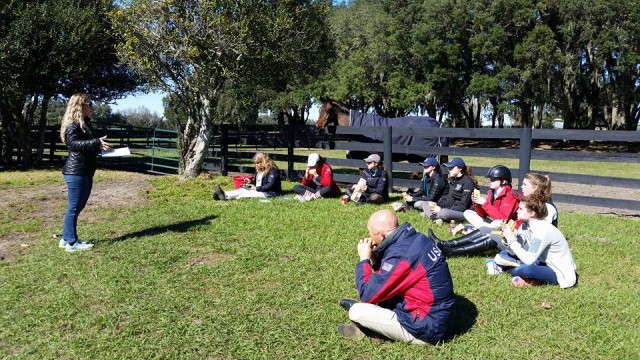 Someone is trying to crash the lecture! Photo via USEF High Performance Facebook page.

Last week it was E25, this week it’s the E18’s who are soaking up the high performance attention. It’s amazing to see how quickly these two programs have evolved from their inception. With their own exclusive coach in Leslie Law, these riders now have mentors to help guide them in their transition from juniors to young riders, to full blow professional. It might take a little longer than developing a horse to the top levels, but the evolution of our youngest riders is every bit as important.

Concerns are rolling in over the readiness of the equestrian events for Rio. There have been delays in refurbishing the Deodoro venue according to sources, but the FEI is monitoring the situation and feels comfortable that they will be ready. FEI representatives will periodically be visiting Deodoro to make sure they are fully aware of the completion of improvements. [Concern’s Over Rio’s Equestrian Venues]

Japan is collecting dressage horses ahead of the Olympics. Japan clinched team qualification at Perl CDI in September and appears to be reloading their aresenal. British Olympic horse Clearwater was secured as Akihiro Shimoda to ride, while Akane Kuroki acquired Toots from the Dutch. Earlier this year, Kiichi Harada obtained a lease on a top German horse called Tiesto.  [Japan Invests in Elite Horses]

Behind the Stall Door: Legolas 92. Be prepared to get the warm fuzzies. Legolas is apparently Mr. Personality at home, who demands attention and pouts when he doesn’t get it. He’s not super fond of the vet, but loves his groom friend Eddie, and enjoys untying Steffen Peters’ boot laces just before a competition.  [Behind the Stall Door]

SmartPak Product of the Day: This might be a necessity for jogs, vet boxes, and basically any time a groom needs to spiff up a horse just prior to competing. [SmartPak]

Buck has taken over the ride on Escariz du Rona, the horse he bought for his wife Andrea as a wedding present, while she is pregnant with their first child. We see what you did there, Buck.