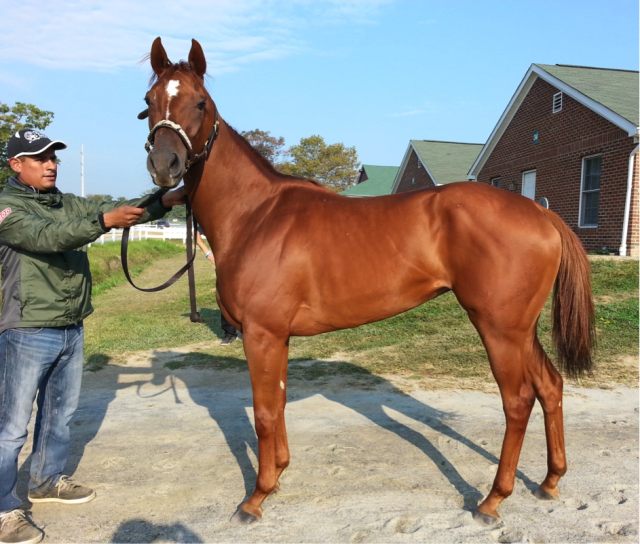 Three-year-old chestnut mare, on the track

In October of 2013 I decided to get a horse. By normal (I mean non-eventer) standards, it wasn’t a great decision. I had graduated the year before and had always intended to get another horse, but between car payments and taxes and other adult expenses I’d hardly been able to save a dime. I had planned to hold off until the spring when I hoped to have something resembling a savings account; but in September I finally cut loose from one of those depressing, drag-you-down type relationships (everyone has one of those, right?) and said “Screw it! I’m getting a horse. Now.”

With no budget to speak of but plenty of experience bringing along OTTBs, I called up my friend Laurie who worked at Delaware Park racetrack. We arranged to look at a CANTER horse and another horse that a friend of hers was getting rid of.

I showed up on the backside bright and early Saturday morning. Unfortunately the CANTER horse had terrible, broken-down legs and the other had a huge bowed tendon, so both of them were a no-go for an event prospect. We proceeded to wander around the barns asking trainers if they had any horses they wanted to get rid of.

Eventually someone directed us to a Mac Robertson, who was standing by the track watching his horses work. When I explained that I was looking for a sporthorse prospect he looked us up and down, said “I got time,” and walked stolidly back to the barns.

Mac had them bring out a handsome bay with a great build and big walk that screamed ‘dressage’, but unfortunately he also had a bowed tendon that I wasn’t willing to take the risk on. Then he told them “Get Nomorewar,” and explained that this filly had been off for a few weeks with some ankle rounding, but she had never won a race and we could take her if we wanted her.

Nomorewar proved to be a cute chestnut mare with decent conformation who was sound at the trot. I didn’t love her but there weren’t any serious problems with her, so we scheduled a PPE with Laurie’s vet.

We came back in afternoon to visit Nomorewar and watch some races while we waiting for the vet. She was beginning to grow on me. “She seems to have a lot of personality”, I told Laurie cheerfully.

When the vets came in the afternoon, Nomorewar proved to be a bit … ‘sassy,’ shall we say? She trotted out fairly sound when she wasn’t busy rearing or spooking, with only slight issues in her fetlocks and knee, so we x-rayed and found no serious issues. She was quite opinionated about having her teeth examined, and Laurie joked “Yep, she certainly has a lot of personality!” The Irish vet tech rolled his eyes at us, “Sure, and you’ll be wishing she had a little less personality when she gets to setting it against you!”

“You are seeing all this, right?” The vet asked me. “Yep!” I replied glibly, “It’s all good, I mean, I don’t want to run cross country on a horse that’s dumb as a rock.” 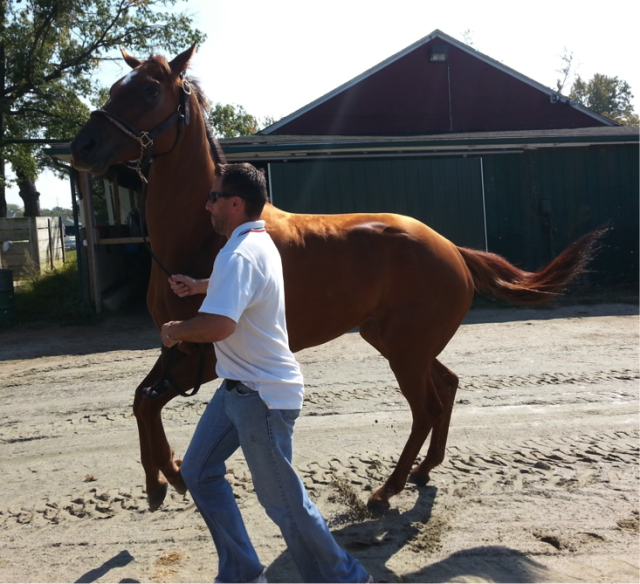 Eventually we got the up-check; chances were Nomorewar would be good to go after a winter of rest. I found myself signing a $1 bill of sale in exchange for a set of Jockey Club papers and a sassy three-year-old chestnut mare.

That evening we came back with Laurie’s trailer. The barn was dark and deserted, but we managed to find Nomorewar’s stall and get some boots on her. As we led her out into the night, I joked that “I feel like we’re stealing this horse”. As the words left my lips, somebody popped around the corner and asked “Hey! What horse is that?.”

“It’s Nomorewar!” I quickly responded, trying to play it cool “I bought her off Mac Roberson today, I have her papers and a bill of sale in the truck if you want to see them.” “No that’s fine,” they said, and we breathed a sigh of relief. “I just wanted to make sure you weren’t sneaking out of here with one of the hundred thousand dollar horses. But that one you can have.”

After a slight debate about loading we pulled onto the road, with Nomorewar screaming and kicking in the trailer behind us. I had gotten a horse – straight off the backside.