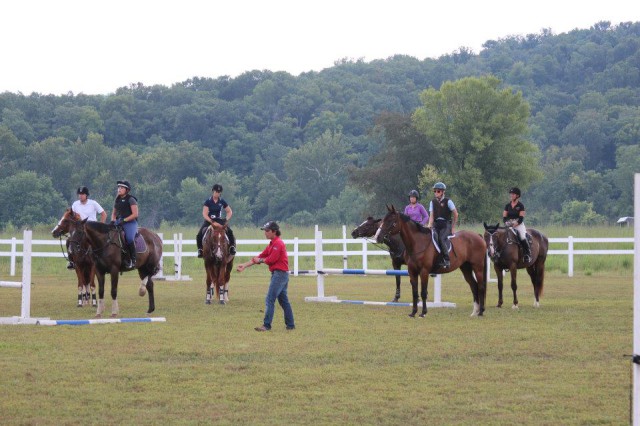 I’ve always been a big fan of clinics. Even if I only audit one, the learning opportunities are endless. So, when I heard that Dom Schramm would be stopping in Columbia, Mo., on his clinic tour, I set about making plans to attend.

The clinic was held at the beautiful Greystone Equestrian Center, nestled in the heart of Missouri. Sharon Rose, the owner of Greystone, did a wonderful job facilitating the clinic, and when I arrived on Saturday morning, dressage lessons were already in full swing.

Dom has a way of putting his students at ease right away, asking questions about both horse and rider to get a sense of their experience and goals together. Dressage day saw horses that were seasoned competitors, coming back from some time off and nervously green in a new environment.

Dom quietly worked with each horse that came into the arena that morning, tailoring the exercises to each horse and rider’s strengths and opportunities for improvement. Quick to praise and just as quick to reprimand, Dom made sure that the rider fully understood the elements of each movement he asked for. Encouraging the horse to move forward and straight, referencing the training scale that is often overlooked, were paramount. 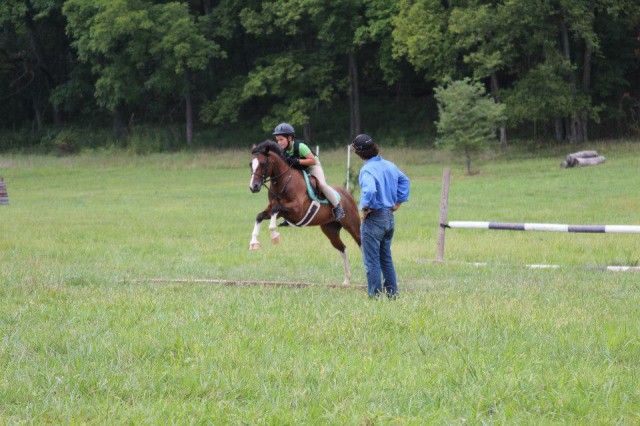 One exercise I found to be particularly interesting was one performed at the walk. Dom had riders walk in a square shape, managing each step of the walk in order to concentrate on straightness. It was a difficult exercise for most at first, as you don’t necessarily realize how difficult true straightness is until you really focus on it. Dom told a story of witnessing a Grand Prix dressage pair practice the walk using this exercise, only to find that they also looked rather like a “drunken sailor.” After a few attempts at the exercise, the riders came away with a better understanding of true straightness.

I was unfortunately only able to attend the dressage sessions, so I called upon Colin Palmer, who participated in the lessons for other phases. Colin and his horse, Calvin, worked hard to prepare for the clinic, he said, as the horse came into his possession with plenty of baggage to work through. Calvin was “reluctant to even let me get on” at first and would buck and rear without hesitation, Colin said. 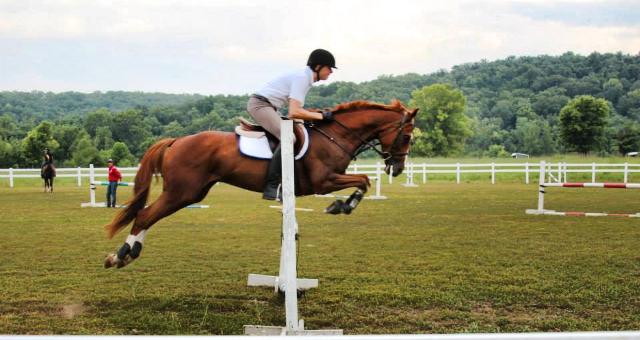 Watching Colin work with Calvin in their dressage lesson, it was apparent that the horse had some nerves and tension, but not once did he threaten any truly naughty behavior. Dom was highly complimentary of the work Colin had put into his horse so far, giving him some helpful tips on continuing to work on straightness and strength.

Colin had a wonderful experience with Dom in the jumping lessons. “(Dom) really focuses on adjustability of the canter in the show jumping,” he said. “(We were) doing four poles in a 20-meter circle and having to get the same number of strides in between each. Then he had three poles set up in a line, and it was five strides each.

Many thanks to Sharon Rose and Greystone Equestrian Center for hosting a great learning opportunity for us here in the midwest and to Dom for taking the time to stop in Missouri. I look forward to future opportunities to learn, and hopefully one day I will have a horse to bring.