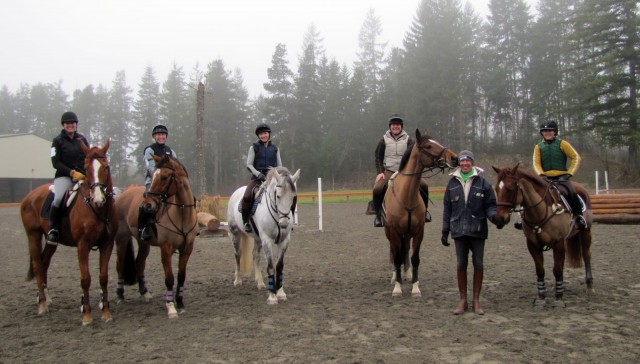 The Novice group at a 2014 Peter Gray clinic. Photo via EN media archives.

Can you spot the next USEA President in this photo? She’s on the fourth horse from the left (the one eating Peter Gray’s hat!) That’s Lou Leslie, and she was officially appointed USEA President Elect at yesterday’s Annual Meeting. As President Elect, we’ll see a lot more of her as she shadows USEA President Max Corcoran throughout the next year before she officially moves into the role of President in 2023. Lou is hardly a new face amongst eventers, however. She’s been an amateur event rider for over thirty years and fell in love with the sport immediately, also participating via volunteering on local and national levels. Get to know her more in this USEA article.

Creating a Le Lion Atmosphere in the U.S. with Proposed 6- and 7-year-old Championships

A Quick List to Help Prepare Your Horses for Winter

Racing Responds To Bullying Hearing Outcome: ‘Boys Will Be Boys’ Vs. A ‘Force For Change’

Saturday Video: Fianna Masterson and Paint Me Perfect are very strong contenders for the cutest Intro pair ever award. It’s the check of the watch near the end the really gets me.

Fairfax & Favor Fan of the Week: You’ve got to read the whole caption and swipe!