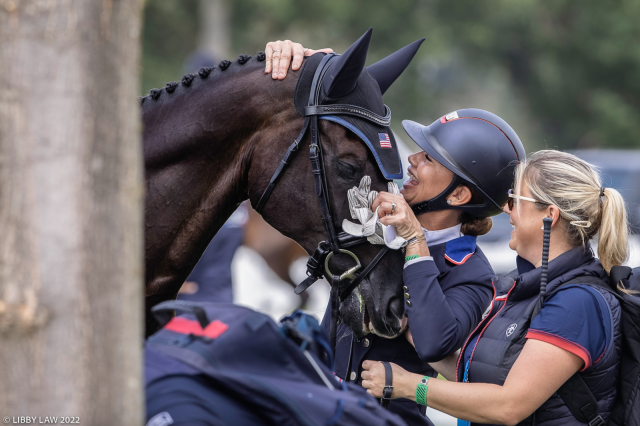 Tamie and Mai Baum with Alyssa at Aachen. Photo by Libby Law.

We love celebrating and learning about the #supergrooms who make this sport go around — quite literally! — so we’re on a mission to interview as many grooms as we can to learn about their journeys. Catch up on the other interviews from this series here and nominate a #supergroom of your own by emailing [email protected]! This one is a special one because Alyssa Dobrotin will be joining Tamie Smith and Team USA in Pratoni for the FEI World Championships.

Alyssa Dobrotin, Tamie Smith’s groom for FEI World Championships for Eventing it Italy this month, grew up riding and competing as well as working for Tamie throughout her childhood. “I wasn’t going to ride at the upper levels, so grooming was my opportunity to be a part of the sport,” she says.

She works for Tamie on a part-time basis, helping her with events like Pratoni — which is especially fun for Alyssa, since she’s known Tamie for 16 years.

Alyssa and Tamie have been working hard to prepare Mai Baum for Pratoni. Alyssa said that Tamie has been “really focusing on the flat, doing a few jump schools, and just trying to keep him fit and ready to go.”

In addition to typical fitness preparation like water treadmill workouts and gallops, Alyssa said that Tamie has been working hard on their already formidable dressage. “After Badminton, she really wanted to improve on that score, so that’s been a big focus, just working on the flatwork and how to get those extra points and be as competitive as possible,” she says.

Mai Baum and Tamie are fresh off of a second-place finish at Great Meadows with their final score of 26.9, only adding some time faults on cross country. Great Meadows, along with Badminton earlier this year, have prepared him for Pratoni and Alyssa says that “now he’s ready to go.”

Going from the West Coast here in the U.S., where it’s very dry, to the east coast in Europe requires thoughtful preparation on Alyssa’s part. “It’s really important we manage their coats and their feet,” she says. This care requires various products like Sound hoof conditioner and Keratex hoof hardener for his feet as well as pink spray and witch hazel for his coat. After using the pink spray and witch hazel, Alyssa curries him well to help his coat with the transition from dry to wet climates.

Of course, Mai Baum comes with a load of other items to keep him at his peak comfort. “I always like to have everything that he needs like all of his boots, all of his fly sheets and magnetic blanket, Professional’s Choice theramics– all of those products just to keep him as comfortable as can be for whatever the weather is,” Alyssa says.

The U.S. team left for France on Saturday. After spending a week training there, they’ll head on to Pratoni, which is just south-east of Rome in Italy — which means another long road trip is on the cards.

Alyssa says that the team of grooms and support staff will “be keeping them happy and eating through the travel” and “keeping an eye on how they’re acclimatising and changing over to the hay.”

Mai Baum has a sweet, yet quirky, personality, which makes him a joy to look after — as long as you pay attention to his likes and dislikes. “He doesn’t like to be sprayed, but he loves to be pampered,” says Alyssa. “He likes to be the center of attention. He’s very sweet, he’s very opinionated. He’s just a really good guy; he’s a total gentleman.”

Because Mai Baum likes to “feel like he’s the king,” Alyssa calls him “His Highness.” She says that “he definitely has a royal kind of persona. We actually call him the Queen of England often because he is royalty but he’s also very kind.”

Alyssa has a special appreciation for Mai Baum. “He’s my best friend. He knows what’s going on. He knows when we’re traveling for something big. He can be a little cheeky, but when it’s time to perform, he’s all business and he’s such a competitor himself,” she says.

Tamie and Mai Baum were named Team USA’s first alternate for the 2020 Tokyo Olympics, which was an honor, but Alyssa is excited for the pair to be competing on the team this time around.

“I’m honestly excited for him to have this opportunity to take his shot at it. Being the reserve for Tokyo was a great experience, but him being able to go and compete and really show what he’s got – I’m just excited for that,” she says.

There is a lot to look forward to with an experience like this and Alyssa is excited to work with the rest of Team USA’s grooms over the next couple of weeks.

“I think we have a really good team; I think it’s a really good group of grooms. Everybody’s experienced, everybody gets along great, so I’m looking forward to that,” she says.

Alyssa, along with the rest of the team’s grooms have been working extra hard to prepare for an event like this, and EN wishes them luck and safe travels!