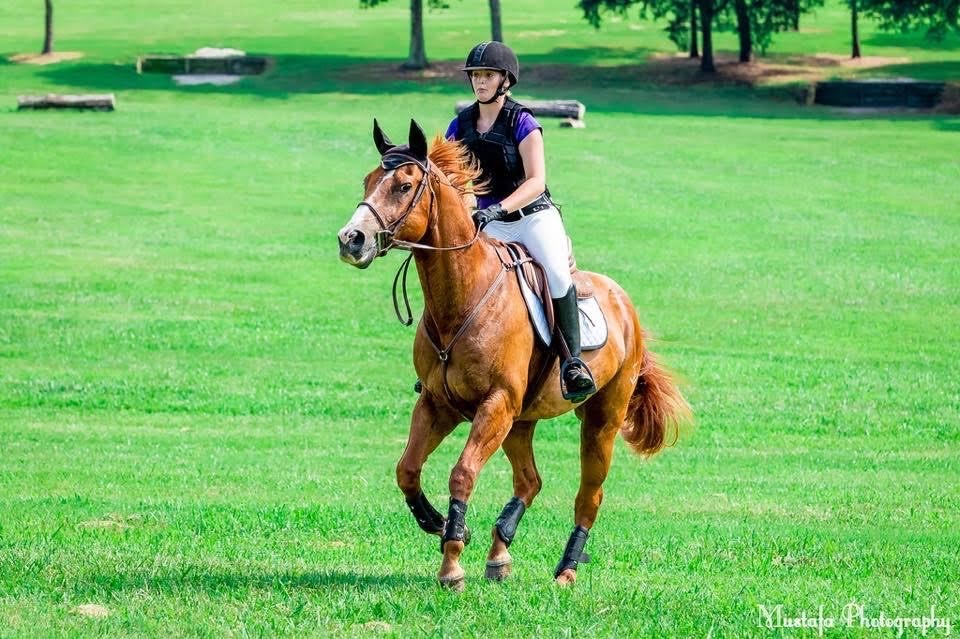 Madelyn Gibbs grew up driving from Chattanooga, TN to Atlanta, GA two weekends out of every month with her parents. It was there in Atlanta where family friend Roger Brown let Madelyn spend the weekend riding at his barn. As a typical kid infatuated with horses, she took that opportunity.

“I would ride Friday night and then I’d spend the night and ride all day Saturday, and then ride Sunday morning, and then I would come home,” Madelyn said.

Madelyn got her start with horses when she was around nine years old when a woman her mom knew taught Madelyn the basics of riding on her Tennessee Walking Horses.

“It kind of started because I was never really good at other sports and riding was always something that was super interesting to me,” she said.

Since Chattanooga is not a very horsey area, Madelyn and her family made the commute to Atlanta for her to gain more riding experience with Roger. When riding every few weekends wasn’t enough for her anymore, Madelyn met Caitlin Randolph at Mystery Dog Ranch in Ringgold, GA.

“I basically became a total barn rat and I grew up there, made all my childhood friends there, and that’s where I got introduced to the sport of eventing,” she recalled.

During her time at Mystery Dog, Madelyn leased Caitlin’s horse, Scout, a Quarter Horse. “He always gave me the best feeling and I couldn’t wait every day to get home from school and go to the barn and ride Scout and he really became my heart horse and my best friend,” Madelyn said.

Out of high school, Madelyn got her first working student gig, and although she said it was not the greatest experience, she learned a lot from it. When Madelyn came home from her working student position, her first horse, Yaya, was retired. She was at a point where she didn’t know exactly where to go next. It was then that her current horse, King’s Ransom, aka Arthur, came into her life. 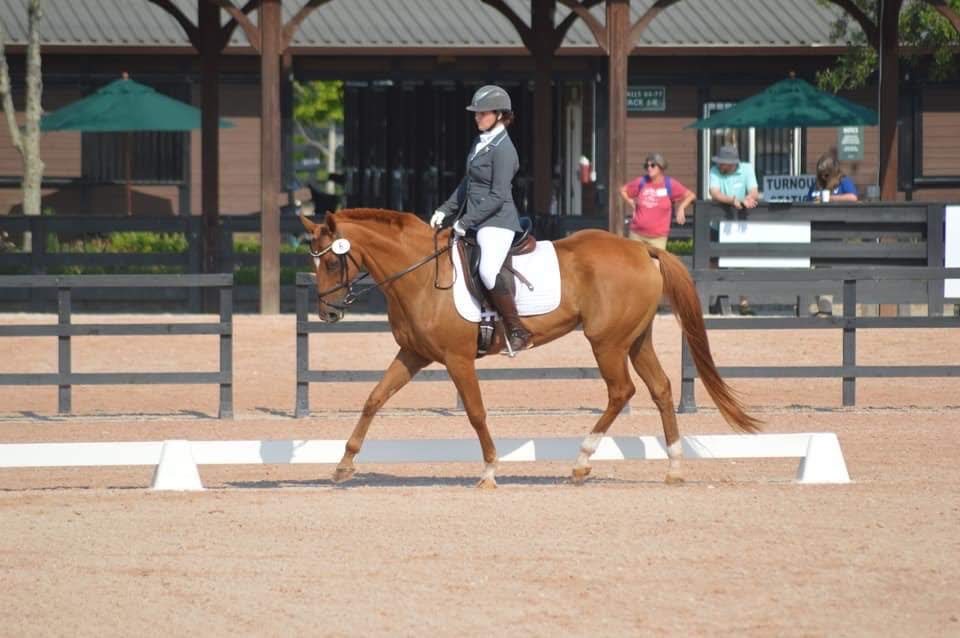 “He is such a genuine and kind-hearted horse and he was exactly what I needed when my mare retired because I just felt a little bit lost,” she said. While Madelyn and Arthur were building their new partnership, she also began grooming for the hunter jumpers. “A local rated horse show hunter jumper barn was looking for someone to muck stalls on Saturdays and I reached out and one thing led to another and I became a show groom.”

When Madelyn wanted a change of pace, she encountered a post from Courtney Cooper of Excel Star Sporthorses / C Square Farm in Nottingham, PA seeking an event groom. “It had been a while since I’d been on the eventing scene, but I’ve always loved it and knew I would somehow find a way back to it,” she said.

So she reached out and less than a month later, she moved to Pennsylvania to start her job with Courtney. “I’ve been here since August of last year and it’s a dream come true.” 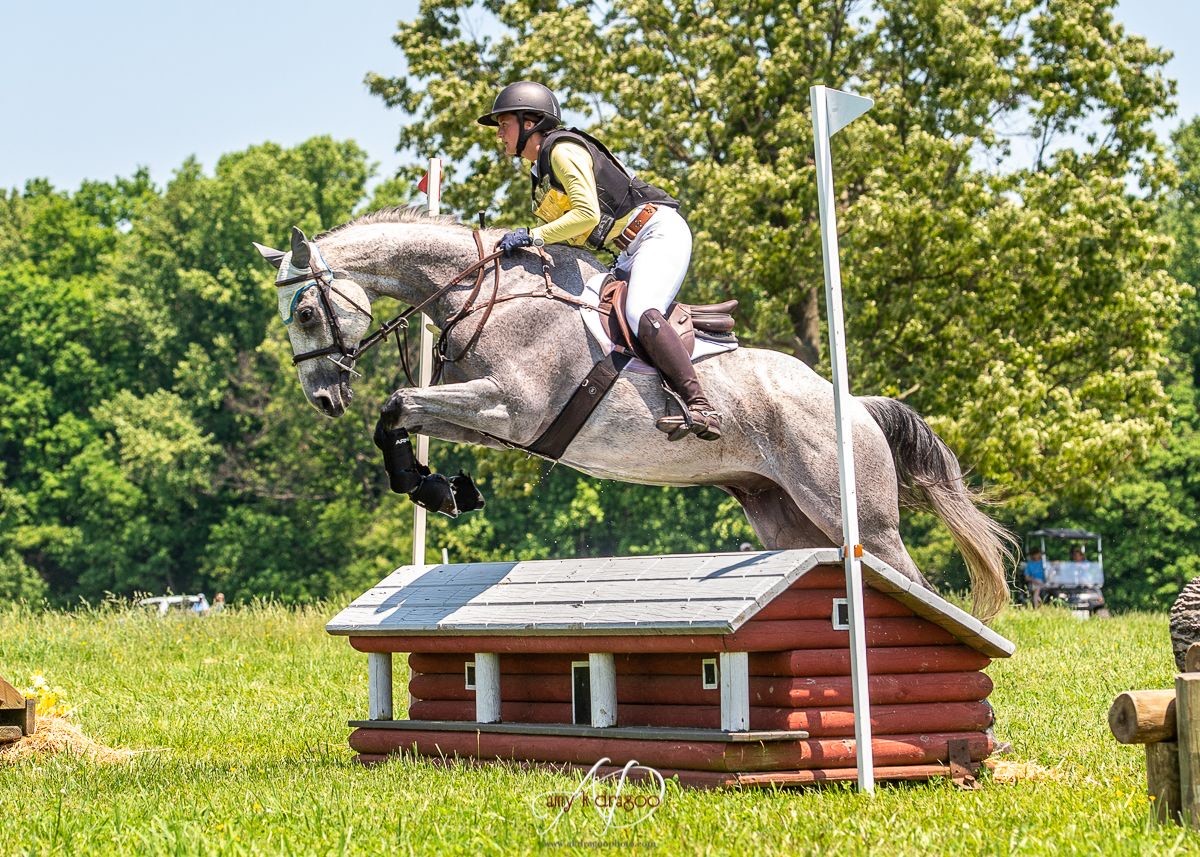 Madelyn and King’s Ransom, aka Arthur. Photo by Amy Dragoo.

Madelyn works with around 30 horses at the farm, including “a bunch of babies that are coming up the ranks.” She enjoys helping with bringing the babies along especially since it’s something she’s never done before, as the hunter jumper horses she’s had experience with were already made.

“I’ve gotten to watch two of our horses – David and Griffin – both win their first Intermediates and I got to see them go to their first three-stars,” she recalled fondly.

Working with Courtney is unlike any job Madelyn has ever worked before. “Courtney is always right there in the barn, right beside you working just as hard. She really cares about the horses in a way that I have not seen anyone else care,” she said.

Courtney encourages Madelyn and pushes her to learn more and try harder. “Everyone we meet says that I am Courtney’s ‘mini me.’ Basically, we’re really similar in the fact that we are strong willed and we have ways we like to do things.” 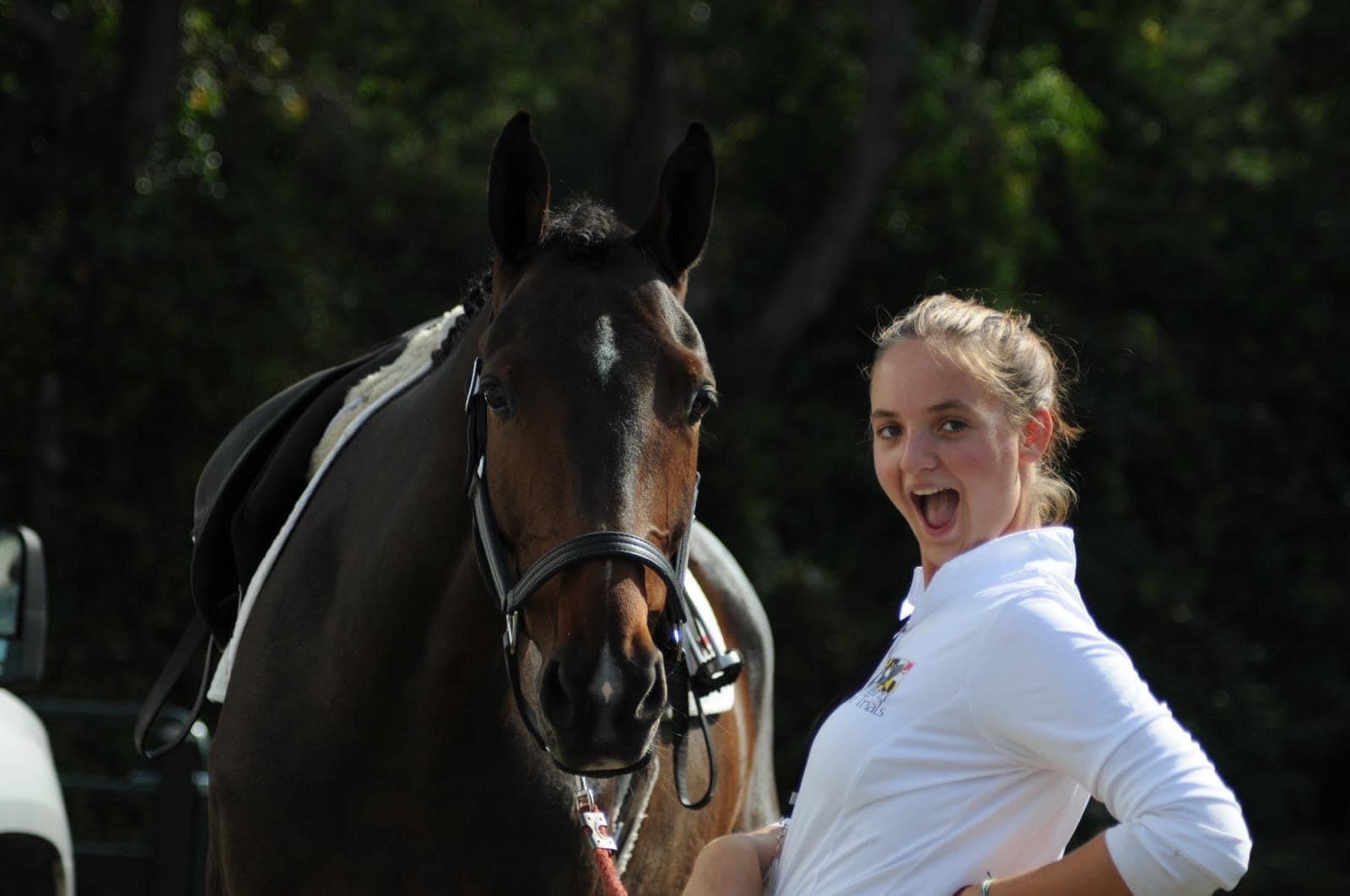 Madelyn thrives off of the constant energy that her job has. “There is never a day that goes by without something interesting or funny or totally random happening here. We always have something to do whether it’s cross country schooling or showing horses for sale or getting new horses off of a trailer at 3 a.m.”

Some people would be intimidated by that unpredictability, but Madelyn feels just the opposite. “It’s always an exciting day; you never know what’s going to happen when you wake up in the morning,” she said. Her process as a groom has shifted as she transitioned from working in the hunter jumper world to the eventing world.

“I was very used to going somewhere for a whole week and setting up the barn at the horse show,” she explained. “It took me a little while to get used to working off of a trailer at one days.”

Madelyn also had to transfer her focus from working with clients, making sure that kids and horses got to the ring on time, the horses were ready on time, and everything else you’d expect in a mixed training and sales program. “It’s a lot of the same stuff especially with us working with sport horses and imports,” she explained. “It’s kind of the same routine just done a little bit differently, which I really love.” 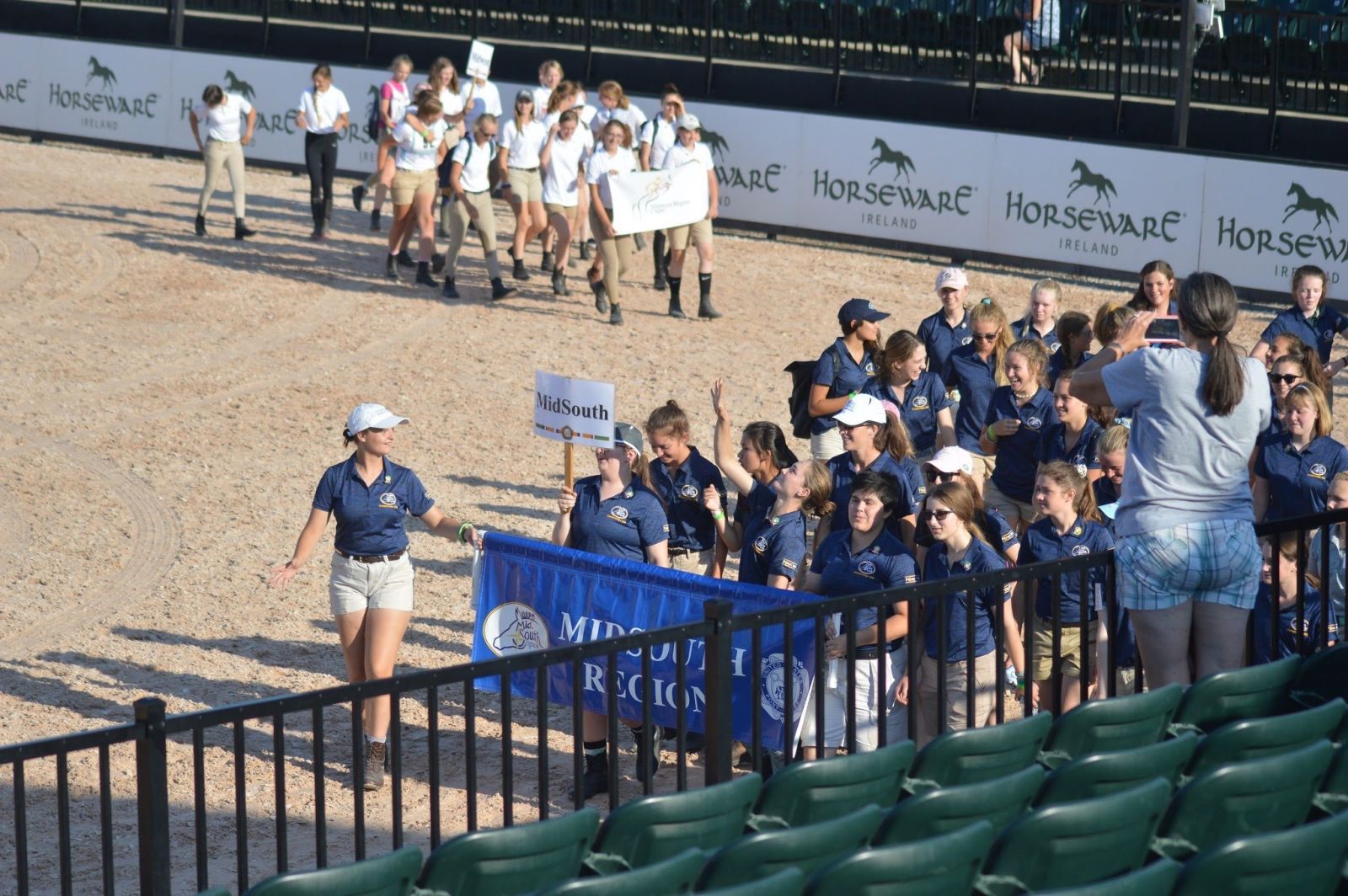 She finds value in being part of Pony Club for the past eight years, which has greatly helped her in her position now and recognizes the importance of becoming involved in the like to be prepared for the inner workings of the equine industry. “I think whether it’s finding IEA or 4-H or Pony Club, anything like that where you can get involved and you can be hands on with animals and with people, it’s really important to have good people skills,” she said.

Madelyn said that many people think that as a groom, you just deal with horses all day, but in her experience, that’s far from the truth. “We have clients in and out of the barn three or four times a week; this week we have horses being shown for sale every single day. I have to be able to put on my customer service voice and cater to them.”

When her former boss first approached her about coming to a show and grooming, Madelyn was nervous to do it, but took the opportunity anyway. “Never turning down an opportunity is a really big proponent of it,” she said. To make the most of every opportunity you don’t turn down, Madelyn’s advice is to take bits and pieces from each opportunity and keep those tools in your toolbox. 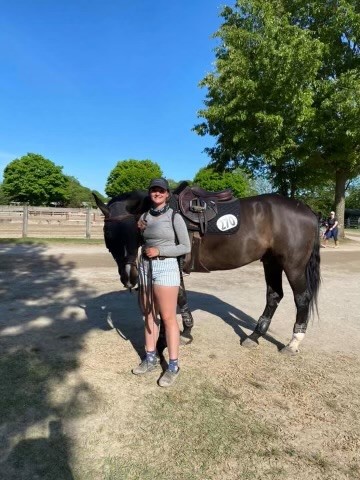 It is because of her support system that Madelyn is able to put all her effort into her work. “I have a huge support group back home in Chattanooga who are always checking in on me through my mom and asking me how I’m doing and I just wouldn’t be able to do the job I’m doing without them.”