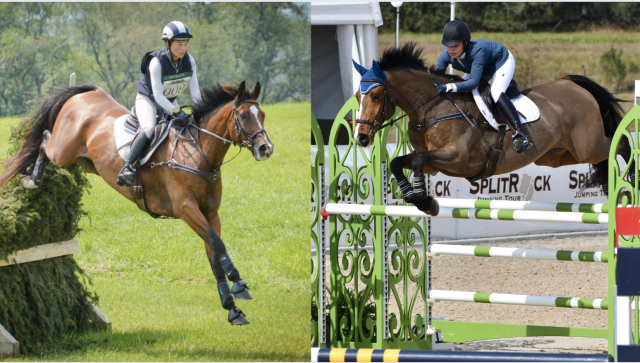 Arielle Aharoni show their prowess on cross country as well as the in the jumper ring. Photos by Abby Powell / Christina Aharoni.

In the Devon arena eventing class a couple of weeks ago, Arielle Aharoni and Dutch Times (Goodtimes – Alino Queen, by Michellino) may have had an advantage over their fellow eventing competitors: not only do they compete at the 4* level of eventing, but they also compete in Grand Prix level show jumping. The mixed course of show jumps and cross country jumps at Devon was right up their alley, and they finished in a competitive fourth place at the end of the night.

It is not often that an event horse can cross into the jumper world at such a high level, but Dutch Times has done it with success. He has taken her from the young rider ranks to 30+ FEI starts in both eventing and showjumping. Arielle told us the story of “Dutch” and their journey together so far.

Christina Aharoni, Arielle’s mother, purchased Dutch as a weanling from Lauren Efford, who breeds European pedigree horses in Coatesville, Pennsylvania, right around the corner from the Aharonis.

Arielle explains that buying a youngster was necessary to get the quality of horse they were searching for. “We were sticker shocked at the price of made horses and decided we would purchase a fabulous weanling and produce them ourselves,” she said.

This strategy can pay off if the foundation is laid well, but it is certainly more risky than having an older, proven horse. Arielle was only eight years old at the time her mother purchased Dutch, so she was too young to do his initial training and competing. Tik Maynard rode the horse for a number of years, producing him to the 3* level in eventing. The intent was always that Arielle would eventually take over the reins when the horse was ready to do the young rider ranks.

However, that did not mean that Dutch was particularly easy. Arielle describes Dutch as “very confident and sassy” as a young horse. “We probably got more education than bargained for!” she explains. But all horses teach us valuable lessons, and Arielle’s current business is primarily a young horse development program so she is grateful for the education Dutch is giving her. 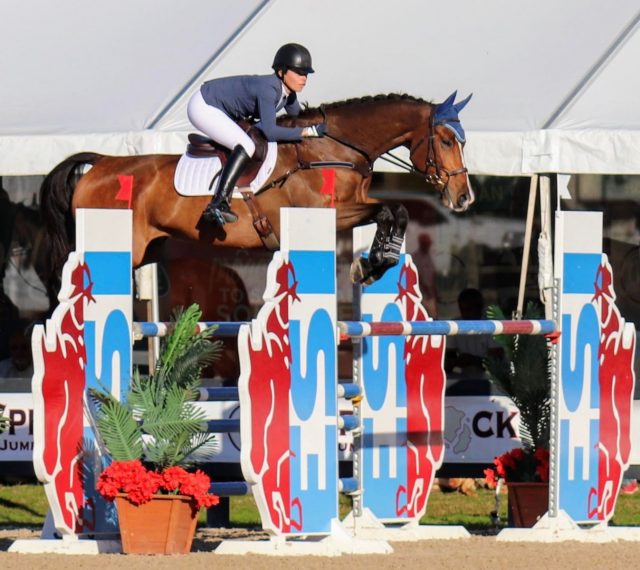 Arielle describes Dutch as quite a character. “He loves to make angry faces, and nothing pleases him more than intimidating a newcomer to the barn. We call him the troll under the bridge,” she explains. He is easily bribed with his favorite treat, Sour Patch Kids, and he only likes to be turned out with mares or ponies.

He also has an interesting pattern of hanging out with toads. “Every year since Dutch arrived as a weanling, he has a resident toad living in his stall. Remarkably, there has never been a toad accident. The toad either sits politely under the corner feeder eating flies or sleeps in the banked shavings in the corner of the stall. Establishing a peaceful existence by compromise is something the toads knew instinctively but took me a longer time to figure out,” Arielle laughs.

Dutch has taught Arielle several valuable lessons, but the most important one is to “keep every horse’s confidence intact because that is what makes them successful.” She notes that the sport is stressful in itself, but adding in the traveling, the foreign environments, and the atmosphere creates even more pressure, so it is paramount for horses to stay confident in order to perform their jobs.

As for Dutch himself, Arielle describes his “work ethic, confidence in himself and heart” as the three qualities that make him good at both eventing and show jumping. His strong personality means that sometimes she is simply along for the ride. “While we can nurture those traits, I believe we have no say in some regards!” she laughs.

It’s also true that Dutch has taught Arielle to accept horses for who they are. For instance, she believes that his innate carefulness lends itself terrifically in the show jumping arena, but it can catch them out on the cross country course. She has learned that she cannot change that about him, so she has to just work alongside him and continue to develop their partnership.

Developing young horses is actually what drove Arielle to start pursuing straight show jumping with Dutch. Like any young rider with their first upper level horse, Arielle wishes she knew then what she knows now. However, she can pass the lessons Dutch has taught her onto her next horses. 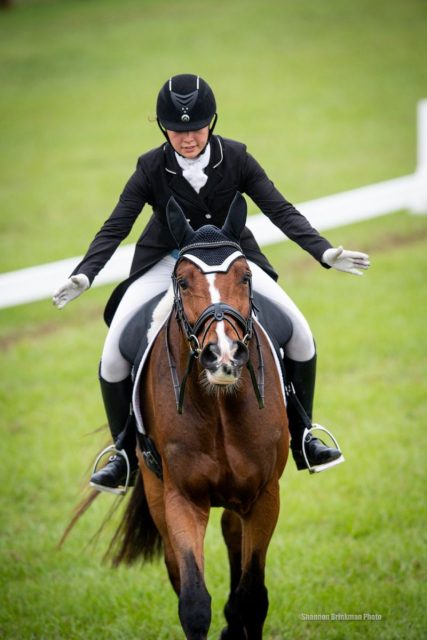 “Other than Dutch,” Arielle explains, “all my stock at home is young, so Dutch became the subject of my quest to compete at Grand Prix show jumping.” The goal to develop more jumpers meant that Arielle wanted to get more familiar with the sport. “I have quite a few young horses from owners and breeders for the show jumping track so I figured I should get better educated in that discipline,” she reasoned. Dutch had always excelled at show jumping in eventing, and Arielle decided that she wanted to be like the top riders who compete in two disciplines at the upper levels.

Most eventers jump 1.30m maximum, but show jumpers are jumping that height with their six- and seven-year-olds. The height, technicality, and precision of show jumping is on another level. Dutch “obliged willingly” to Arielle’s goal of getting into show jumping, not only by taking her through the American standard Grand Prixs but also some FEI show jumping as well. “The FEI tracks have been very challenging but he is very game and wants to know why I can’t just ride him better!” Arielle says.

Arielle works with Andrew Philbrick and Sarah Wayda of Hunter Farms on her show jumping. She describes them as “absolutely brilliant people” not only as coaches, but as mentors and friends. Arielle spends a lot of time horse showing at Princeton Show Jumping, which is in her backyard and suitable for all the horses—from the youngsters on up. Princeton Show Jumping also has a great young jumper development series that culminates in their Young Jumper Championships in the autumn.

One of the highlights of eventing is the experience of traveling to and competing at different venues which present their own challenges. Getting more serious about show jumping has also allowed Arielle to explore different venues across the country.

She was lucky enough to join Hunter Farms at the Split Rock Jumping Tour in Kentucky last year and has also competed on grass tracks at the Kevin Babington Charity Grand Prix in Wellington and Live Oak International in Ocala. She and Dutch placed in the top-ten at Split Rock Sarasota and even won the Welcome Stake and Classic Finale at Princeton Show Jumping last year. 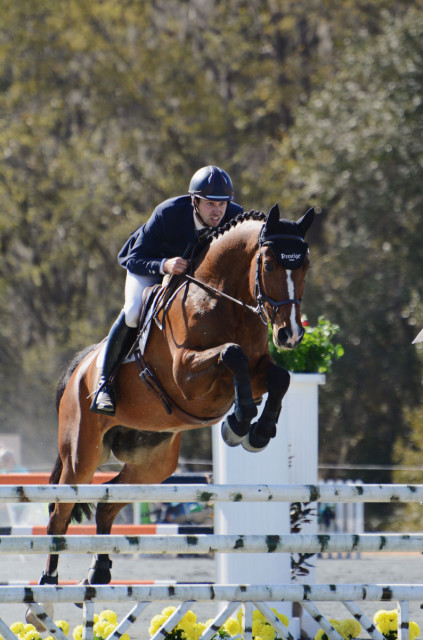 Tik Maynard and Dutch Times in 2015. Photo by Jenni Autry.

Sprinkled in between these jumper shows were good placings at the CCI4*S’s at Great Meadow International and Fair Hill International in the past couple of years. Arielle also placed in the top-20 and won the Maui Jim Award for highest placed young rider in the Advanced division at the 2021 AEC.

As for which discipline she prefers, Arielle declines to answer. “While I do love both disciplines, I don’t think I can compare them. I love training horses, and I understand that each individual horse will excel at different things.” Arielle dreams of making a U.S. team in any discipline, or better yet, in multiple disciplines.

Her short-term goals in eventing are to complete two CCI4*-L events so that she can qualify for a CCI5*. She made headway on that goal with a 10th place finish in the CCI4-L at Bromont just last weekend. As far as show jumping, in the short-term she is hoping to improve on her results over FEI tracks and get down to Wellington this winter and do some U25 Grand Prixs. “I have a lot of work to do,” Arielle admits, “but I’m confident that with the right guidance, training and a little luck I can get there.”

Arielle explains that she has learned lessons from show jumping that have helped her excel in eventing, and at the same time there are several ways in which being an event rider has given her an edge in the jumper ring. “Being an event rider,” she says, “there is nothing in a jumper ring that frightens us in terms of shape.” For example, the show jumping version of a “skinny” is nothing compared to a cross-country skinny. However, the sheer size of the show jumps sometimes intimidates her. At her first Grand Prix with an open water, she recalls politely but jokingly asking her coach if he would like her to go over or through it!

Being an eventer has made Arielle braver and bolder in the jumper ring, and getting into the jumper world has made her much more accurate which has helped with the eventing. She explains that the precision and accuracy that is required in show jumping was “very eye opening and humbling for me as an event rider.” 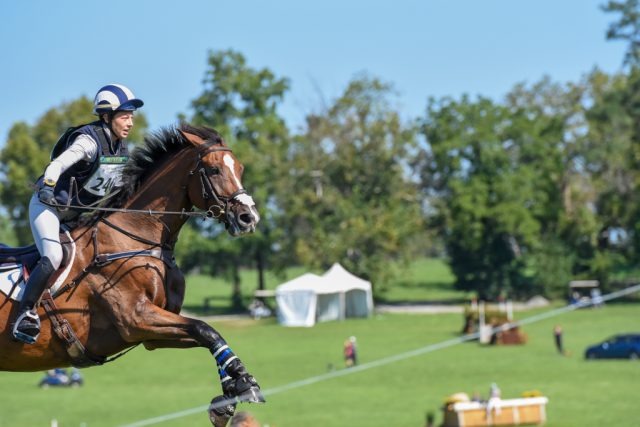 Being precise and accurate in cross country riding has meant that she can more confidently control where her horse’s body is on the track and at takeoff. (“At least most of the time!” she quips.) And finally, being confident over massive show jumping fences has helped her eventing as well.

Ultimately, though, it’s about the horses. Arielle sums up her approach by commenting that figuring out how to make horses shine is the job of any trainer, which is what she wants to master. Fitting the square peg into the round hole is not the way to go. Rather, figuring out which sport the horses enjoy and excel at should be the goal.

“Having the skill set myself to direct horses into the discipline for which they are most suited is valuable in a young horse program.” Arielle hints that she is contemplating a venture into the dressage world as well in the future. With her flexible approach and open mind, success in that discipline will likely come easily as well.