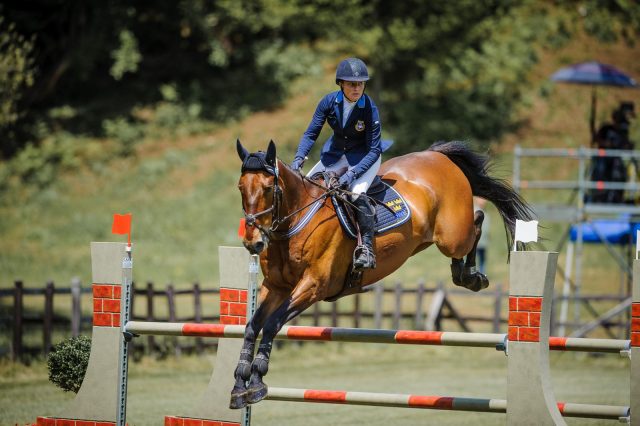 Aminda Ingulfson and Joystick are best of the Swedish team in eleventh at the Pratoni test event. Photo by Tilly Berendt.

Sweden is the latest team to release their line-up for next month’s European Championships, at which they hope to consolidate their excellent Nations Cup form into Championship results. The five selected horses and riders are as follows:

The team mixes stalwart experience with exciting new talent: Malin Josefsson and Golden Midnight were on the 2019 and 2021 bronze-medal-winning European Championships team, while Sofia Sjoborg and Bryjamolga van het Marienshof Z, who made their Senior championship debut at last year’s European Championships as individuals, finishing thirteenth, will step into the team role this time. 24-year-old Sofia brings plenty of team experience in her own right, though: she’s represented Sweden five times at Junior and Young Rider level, taking two bronze medals along the way. Aminda Ingulfson, who has stepped up to Nations Cup teams over the last season, will make her Championship debut with the excellent Joystick, with whom she finished eleventh in the World Championships test event in May this year. Frida Andersen‘s Box Leo will also enjoy a Championship debut, though Frida herself has previously ridden for Sweden at Pony and Young Rider Europeans and the 2013 European Championships, and the 2016 Olympics.

The individual competitors, Niklas Lindback and Focus Filiocus, returned to competition last year after a year and a half out of action, and have picked up some consistent results since, including second place in a CCI4*-S at Strzegom last spring and a win in the CCI4*-S at Sopot this May. The gelding, who jumped clear around the 2017 and 2019 European Championships and the 2018 World Equestrian Games, also made his five-star debut, delivering a steady clear at Luhmühlen for a top twenty finish.

The first reserve for the team will be Christoffer Forsberg and his 2021 Europeans mount Hippos Sapporo, who have enjoyed an excellent season with wins at both CCI4*-S and CCI4*-L this spring, as well as a third place finish at Maarsbergen CCI4*-S and a swift clear at the final selection trial at Haras du Pin.