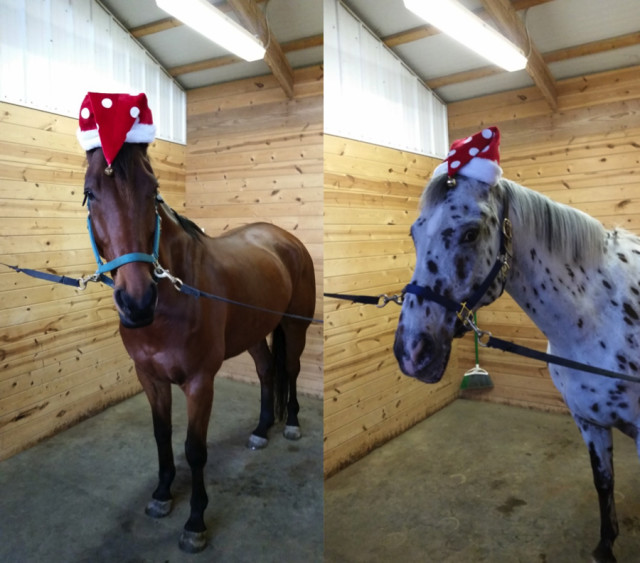 Cayenne, left, enjoying Christmas Break. Affair … not so much. She’s on the “naughty list” with that face.

“Time heals all wounds.” “Time you enjoy wasting is not wasted time.” The quotes about time are virtually endless (much like time itself!). It is something that we think we have so much of only to find out that it has flown past us without our recognition. We sometimes take for granted all of the time we have until something happens that makes us realize how precious this concept really is.

Perhaps I am getting too philosophical here (probably because of the philosophy class I am currently taking!). My purpose in writing this was to express my thoughts on how time relates to horses. Sometimes (or most of the time) horses’ time and schedules are not compatible with our own. We need to learn to take a step back and reexamine our priorities.

Now, I am not claiming to be an expert by any stretch of the imagination. I just thought that we always hear from our trainers and all-around amazing riders how to do things, but sometimes the best advice comes from people at our own level who are struggling with the same difficulties that we are. Sometimes it’s even the exact same advice, but for some reason, it clicks when we hear it from someone who DOESN’T have their act altogether.

I don’t think I’m saying anything earth-shattering here, but if just one single person reads this and has an “Ah-Ha!” moment, then writing this has been worthwhile. Plus, let’s be honest, it’s much more fun to write about horses than to do homework …

As winter break of my junior year in college approached this past December, I wanted to give my competition horse, Cayenne, a two-week vacation. Probably not the longest vacation in the world, but with my plans to move up to Prelim sometime next season and the ever-present goal to keep progressing in my riding capabilities, we need all of the rides that we can get to improve and prepare. So he got two weeks off, and then I started slowly bringing him back into work after that.

Well, apparently Cayenne decided that he liked the vacation too much and that working was hard, so he twisted his shoe, stepped on the clip, and ultimately gave himself an abscess after being back into work for about two weeks. After all was said and done, he had been off for another 2 ½ weeks between getting the abscess out, hardening the hoof back up and getting the shoe put back on. So in roughly 1 ½ months, he had been actually working for about 2 weeks.

OK, time to get back to work. I am planning on heading down to Aiken during my spring break to get the competition cobwebs out, so we need to get our butts back into fighting shape! But I realized something extremely important as I was bringing him back into work. Yes, it was difficult for both of us as we were fighting to rebuild those lost muscles, but this epiphany concerned something deeper than just muscle weakness. In having that time off, we had essentially hit a “reset button” in our training. 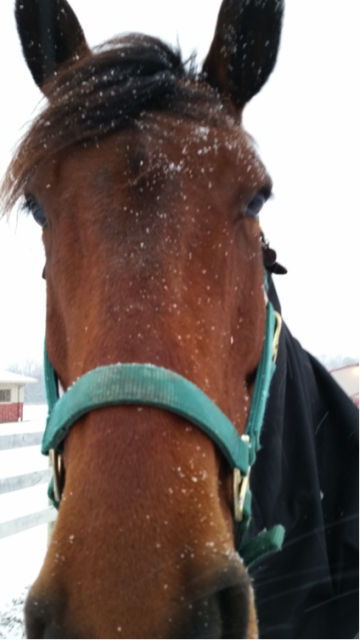 He still knew all of what I was asking for; that’s not what I mean by that. But rather, all of the areas where we had struggled before or were attempting to learn or improve upon, were reopened with a fresh perspective. In having the time off, we both moved on from our own issues. I am able to relax and approach problems with an open mind, not thinking about them in terms of how we didn’t fix them the other day, but rather how I can ask in a way that he understands and accepts.

We both wiped the slate clean in terms of not getting annoyed by each other’s inconsistencies. For example, as a training tool, we had been trying to learn how to half pass at the trot. He was starting to get it before the break, but we would get one good half pass mixed in with a couple other ones whose negative attributes came from tenseness, crookedness, lack of impulsion or all of the above.

But after hitting the “reset button,” we’re both more relaxed and not anticipatory of negative things when we are trying to work on them again. We still need to rebuild our hind end muscles, but the beginnings of the mastery of this movement are a lot smoother.

So what I have been trying to say is that you should not be afraid of taking time off and taking a step back. Sure, it may seem like you’re losing precious time to practice and ride, but it may actually help both you and your horse to decompress, chill out and re-approach things with a clean slate.

It places the emphasis back on the basics: impulsion and balance, longitudinal and lateral suppleness, and many others. Having a vacation, even just a few days, is actually a very important tool that you can put in your tool belt to bring out when you’re having issues. It certainly helped me!