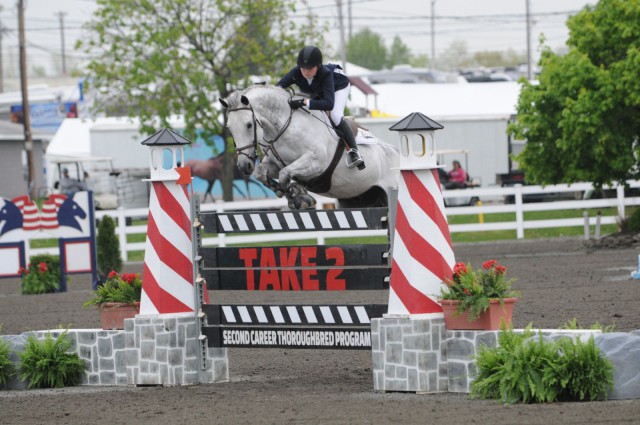 There’s plenty of crossover between our world and the jumper ring this time of the year, with many snowbird eventers hitting up the winter horse show circuit to up their game. Thanks to the TAKE2 Second Career Thoroughbred Program, we’ve now got one more reason to work some some straight-up show jumping into our pre-season schedule.

Launched in 2012, TAKE2 funds prize money and awards in hunter and jumper classes restricted to Jockey Club registered Thoroughbreds. The goal is to highlight the success of Thoroughbreds as show horses and help further create a market for OTTBs.

Since its inception the Program has developed from a startup initiative offered at just a handful of AA-rated shows in New York, New Jersey and Texas to a still-expanding juggernaut that encompasses 23 states. 2015 was a big year for TAKE2, with a big boost coming from the introduction of the new USEF-approved C-rated Thoroughbred Hunter and Jumper Divisions as well as its introduction of the TAKE2 Thoroughbred League. The League is a member-based initiative that rewards participating members with the chance to win a total of $30,000 in year-end awards.

2016 promises to be TAKE2’s biggest year yet, as there are already more than 240 horse shows on the calendar committed to hosting TAKE2 Thoroughbred Hunter and Jumper divisions.

Florida’s two biggest winter horse show circuits —  the Winter Equestrian Festival in Wellington and HITS in Ocala — are expanding their partnerships with the Program this year. Both will offer TAKE2 classes every week of the 2016 12-week winter season; the hunter divisions include two to four classes over 3’0″ fences and an under-saddle class, and jumper divisions include one or two classes over 3’3″ fences.

Both HITS Ocala and WEF are popular destinations for eventers, and in a sea of warmbloods it’s great to have this opportunity for our up-and-coming OTTBs to shine amid peers while gaining experience for the upcoming season.

“It’s hard to believe that just four years ago, TAKE2 was a fledgling program offered at just eight horse shows in three states,” TAKE2 President Rick Violette Jr. said. “The support from both the Thoroughbred industry and the hunter/jumper community has been overwhelming.

“More horse shows have signed on, more Thoroughbreds are competing. Most important, because the popularity of the Thoroughbred in the show ring is growing with professionals and amateurs alike, it’s becoming easier to find good homes for retired racehorses, and that has been our goal since day one.”

League members earn points in affiliated USEF Thoroughbred Hunter and Jumper Divisions. The membership fee for the 2016 season is $50 per registered Thoroughbred. The deadline for enrollment is one week following the final day of the horse show where points are earned. To sign up, go here.

Learn more about TAKE2 and check out the full schedule of events here.