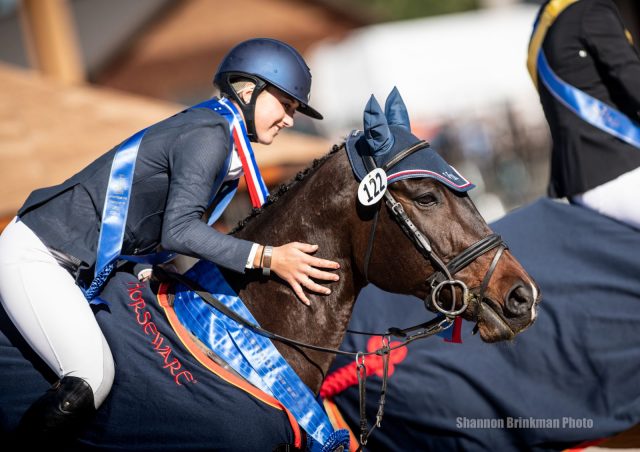 Upon winning the CCIY3*-L championship last month at Tryon, Jordan Riske had perhaps the biggest smile on her face of any winner that weekend. The 20-year-old who hails from Manchester, MI had conquered not only her and her horse’s first 3*-L competition, but also a severe form of cancer.

This time last year, Jordan was undergoing chemotherapy and unable to ride.

The story begins in the spring of 2021, when Jordan was training in Aiken, preparing for the upcoming season. It was then that she noticed a swollen lymph node in her neck, and soon found another one next to her throat that seemed to be growing. Jordan’s farrier, Dawn Rammage, also a nurse who works on an infusion floor for cancer patients, recommended that she get it checked out.

A biopsy revealed cancer cells, but the doctors could not determine the source of the cancer. Jordan subsequently underwent multiple CT scans, PET scans, and an MRI, which showed nodules on her lungs and behind her nose. It was Nasopharyngeal cancer, which is not at all common in her age bracket. The cancer tends to affect elderly men who smoke heavily, but somehow, Jordan had gotten it.

The doctors instructed her to start treatment as soon as she could. But there was one thing she wanted to do before starting treatment: she wanted to run a 3* with her longtime partner, Redemption Song. That she did, finishing just outside of the top ten at the Hagyard Midsouth 3*-S in October of 2021. 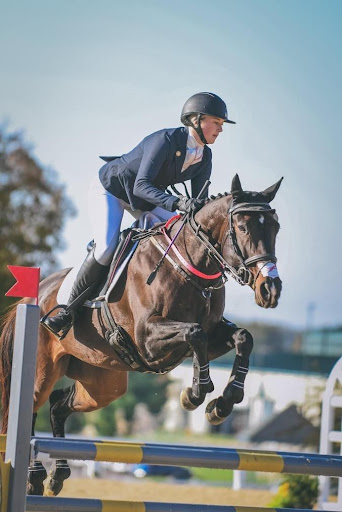 Then it was time to tackle the cancer. “Before I started my treatments, I reached out to Jess Halliday, and she gave me really good advice,” Jordan said. The much-loved late Jess Halliday, known for her advocacy apparel line Buck Off Cancer, passed away from colon cancer in October 2021. “I didn’t know Jess, but I had heard her podcast on Major League Eventing.” Ever-generous, Jess spoke with Jordan about the challenges of cancer treatments and how hard it is to spend time on the sidelines.

“I can’t let this define me.” Jordan told herself this, and that she would get through the cancer treatments. She and her family kept positive attitudes throughout the process. She did three rounds of chemotherapy, had one month off, and then seven more weeks of chemo and radiation. These weeks were intense: the treatments happened five days per week, for seven weeks straight. This started before Christmas of 2021 and continued through the spring of 2022.

“I would just think about the hospital and get sick,” Jordan explained. She developed association sickness, particularly because of the manner in which the treatments were done. Because the cancer was behind her nose, she had to lie on a table and wear a mask that was bolted to the table through which the radiation was administered. “It really made me have a good mental game, to stay strong through that.”

She said that she felt okay physically, but the treatments made her exhausted. “By the end of the treatments, I could hardly do anything I was so weak.” She spent the majority of her time resting.

There was another challenge to undergoing such intense cancer treatments: Jordan could not ride. Her friend Kristen Rozycki agreed to take Redemption Song (known in the barn as “Breezy”), on for a while down in Aiken to keep her going. “I had never been away from this horse for longer than a week,” she explains. 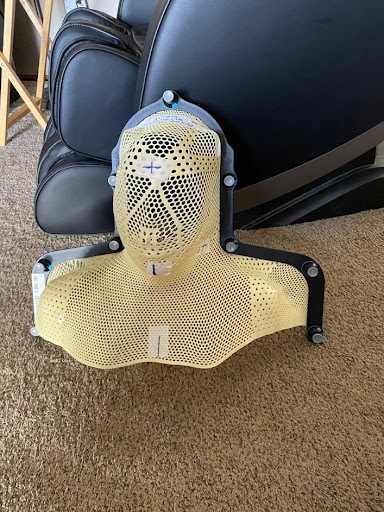 The mask Jordan wore during her treatments.

Indeed, Jordan’s whole life had been consumed with horses. “I grew up helping out with beginner lessons and my mother’s horse camps,” she explains. She and her mother, Amy Riske, buy young horses and train them up the levels, which is how she ended up with Breezy. They also have a small breeding program, with several thoroughbred mares and a warmblood stallion. She has also been awarded her traditional A rating from Huron Valley Pony Club in the Great Lakes Region. Thus, a disease that pulled her away from the horse world was difficult.

Jordan finished treatments on March 11, 2022. “My birthday was March 14, so that was an amazing birthday present.” Soon after that, she went down to Aiken to pick up Breezy from Kristen. She recalls having a jumping lesson and feeling like she could get right back into action. Her doctor approved, but he was surprised that she had so much energy so soon after the treatments.

Jordan and Breezy competed at River Glen in the Intermediate/Prelim six weeks after her final cancer treatment. She then groomed for her coach, Robin, at the Lexington 4*-S at the end of April.

In May, Jordan went in for another PET scan, from which there were still some found to be spots of cancer evident, but in August she had a clean PET scan. She was cancer-free and is now in remission. She’ll continue to have scans done regularly, given the increased risk of recurrence.

Still, Jordan is not slowing down. If anything, she seems to be putting down the accelerator. Having recently finished her Associate’s degree in Business Administration at Washtenaw Community College, she is hoping to transfer next spring to Eastern Michigan University. Alongside her studies, she works for 4* rider Robin Walker, who spends the winters in Ocala. She is also hoping to move up to the Advanced level next year with Redemption Song. 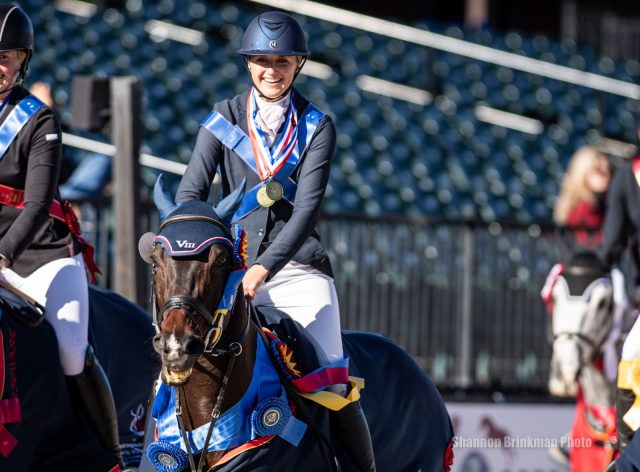 “She absolutely loves her job, she will jump the moon for me,” Jordan smiles as she describes her now-3* horse whom she purchased for $1800 in Indiana when she herself was only 14 years old. “She was the first horse that I bought myself,” she explains, adding that they have had a few bumps along the way, including a broken splint bone and an old injury to the SI ligament. It seems that both of them are fighters.

At Tryon, Jordan and Breezy came out on top of the young rider 3* division, and her combined team of Areas V and VIII also won the team competition.