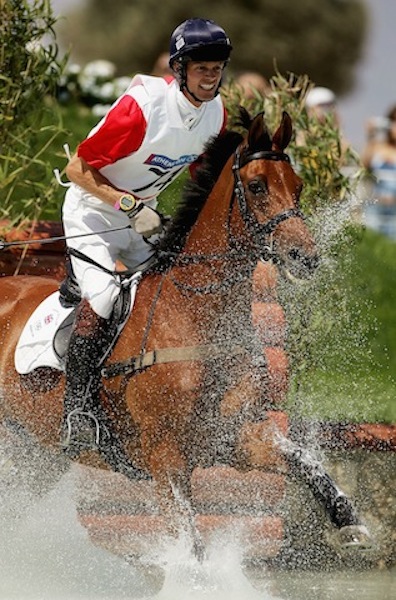 Tamarillo and William Fox-Pitt competing at the Athens Olympics. Photo by Al Bello for Gettyimages used with the kind permission of Biddesden Stud. 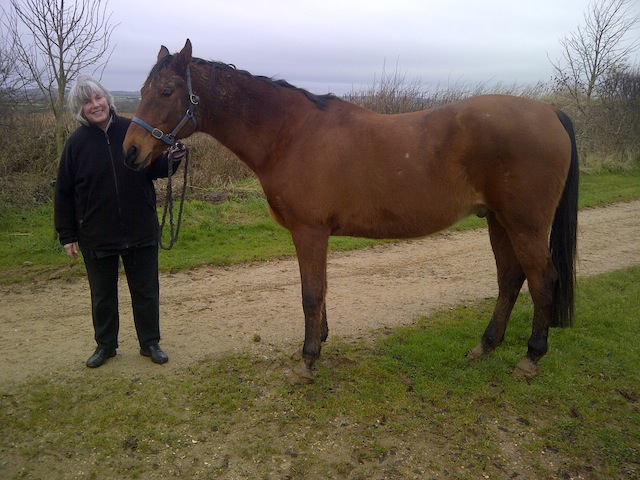 Tamarillo, now 21, with owner Mary Guinness. Tamarillo is currently enjoying retirement at William Fox-Pitt’s Dorset yard, giving the odd lesson to working students and being spoilt as is his wont!

With the old year behind us we’ve all read those “Best Of” lists and no doubt made our own resolutions, along with hopes and dreams for the future.  January is traditionally a time of new beginnings, foals on the ground, fresh starts and looking forward, making plans. Without a major Championship (the Europeans notwithstanding) 2013 will be a year of consolidation and preparation for the WEG in Normandy in 2014, and further ahead for the Olympics in Rio just three and a half years away now. However, it also means that the four star Championships will be more competitive than ever, and unbelievably as I cast my eye down William Fox-Pitt’s long, long list of  victories, six at Burghley alone, it’s almost incredible that he has only won Badminton once. On a part bred Arab called Tamarillo.  I was lucky enough to visit Biddesden Stud recently where Tamarillo was born and bred, and where the line continues. 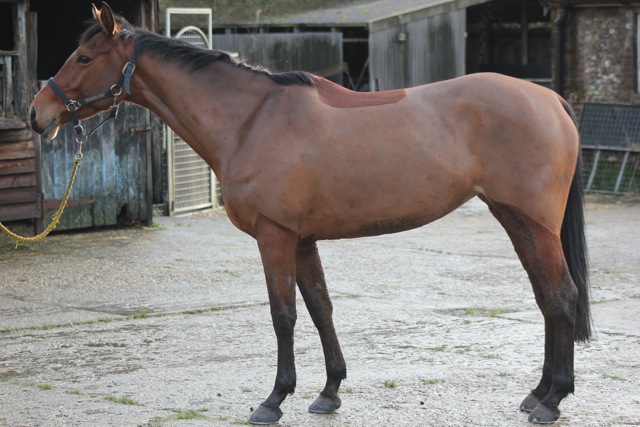 Piquante – a four year old mare by Persiflage who also stands at Biddesden, out of Thais, also at Biddesden who is by Tarnik, the sire of Tamarillo.

Biddesden is very much a family affair as Rebecca, the third generation to be riding and hunting Biddesden-bred stock explains, “We have Arabs because my grandparents bought two mares in the thirties from the Crabbet Park stud, and that’s the foundation. With my parents being interested in eventing it’s just slowly become more focused on competition, but Finn wanted to really combine the toughness, stamina and lightness of movement of the Arabs with the scope and speed of the thoroughbred.”  Rebecca and her brother Rory both ride and hunt regularly, and are keen and knowledgeable but it is their father Finn who really runs the business, and Katey Cuthbertson, a Lucinda Green protege, who competes the eventers. 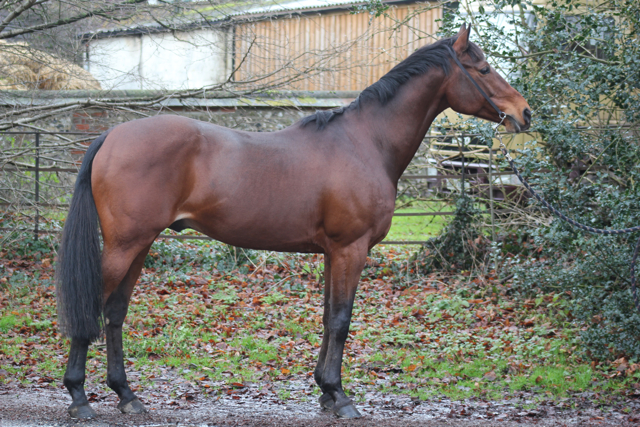 Persiflage is a rising eleven year old Anglo Arab stallion by Primitive Rising out of a mare called Doyenne with 60 British Eventing points and what seems to be an unbelievably sweet temperament; he trots up beautifully on the road outside the yard in the rain, and stands good-naturedly for a picture.  The yard is friendly and functional, with horses tucked into boxes in every corner, yearlings sharing barns, a walker and the lorry also somehow finding space in the beautiful old-fashioned yard, and this is also reflected in the  approach to breeding  –  modern but traditional, an English/Irish heritage  and it’s a business but also a passion. As houseguest Valerie Vizcarrondo explains, ” Here it’s all about the horses; it’s refreshing, it’s horsemanship on a different level, it’s bred into people here, it’s just a part of the culture, here you live it.” 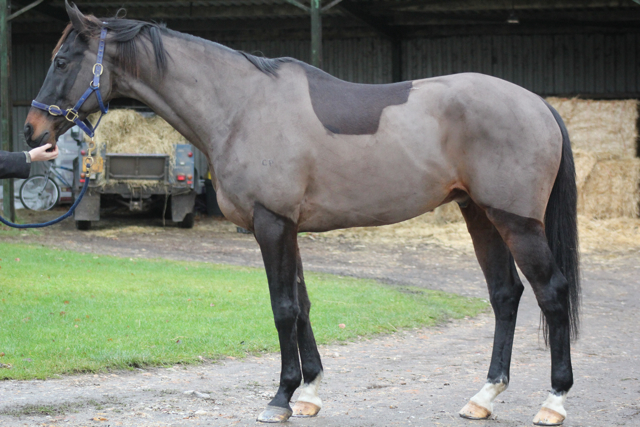 All That Jazz, above, is an Anglo Arab stallion by SS City Lights (Arab) by Belingo (TB) imported from Australia.  Sourced and competed by William Fox-Pitt and then Dan Jocelyn, he’s now hunted by Rory who tells me proudly that William rated his canter better than Tamarillo’s!  William is also currently eventing a rising 7-year-old by All That Jazz, Star Time, bred by his mother Marietta. 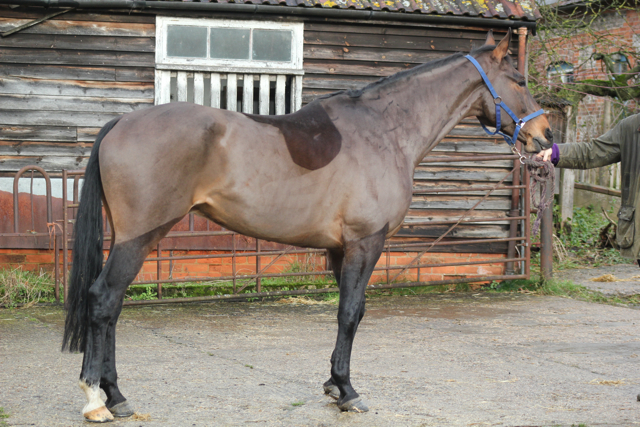 Rory also hunts Alcibiades, above,  who is by All That Jazz 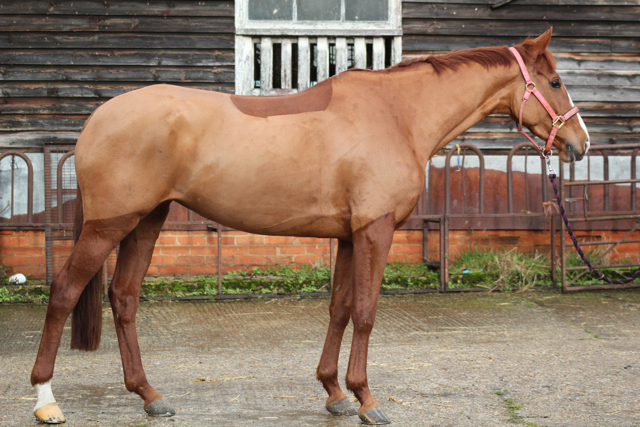 Also by All That Jazz, this nice rising seven-year-old mare called Annaliese. This was the horse that Valerie told me she “should talk to Finn about bringing back to the States, she’s lovely, she’s serious. I saw her out hunting and although she’s not as typey, just the way that she handled herself, I was ready to put her on a plane, I need to do some wheeling and dealing! ” Having arrived just before Christmas, Valerie was getting a crash course, luckily not literally, in the Biddesden style and loving every minute of it, although we both laughed when she told me she was presented with a pair of rubber riding boots on arrival – indispensable! – and she shared some of her adventures since,

“I”ve had a fabulous time; everyone’s enjoyed making great fun of me for not knowing any of  the traditions and the food but I feel like that’s kind of my purpose here so it’s been fine, I’m the comic relief! Adventure beckons! The first day I got here at noon and I was on a horse, All That Jazz, until dark so I could take him hunting the next day which was Christmas Eve. We had a day off for Christmas and then we went hunting on Boxing Day – horses decorated and we hacked miles into the village, all of that fabulous stuff. We were backs to the wind, heads down, pouring down rain and not a single person is talking about going in! We’re going out again on Saturday and I don’t know who I’ll be riding or where it is.  I had no expectations really but knowing about Tamarillo I thought all the horses would be sharp and good-looking and fun, and they’re all lovely.  The Biddesden Type is my type of horse – compact, uphill, very classy looking, I prefer to ride something that looks the part, Ferrari types, a little bit like that, and they’re all that way. “ 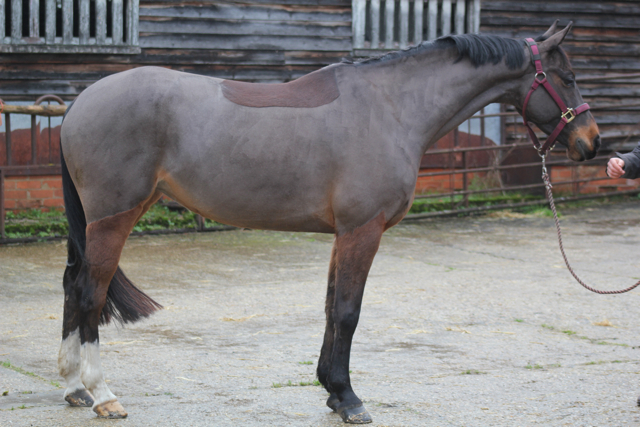 Imbroglio, a 2005 mare by Indoctro (Dutch Warmblood) out of Turkish Candle, “she reminds me of the horse I did Young Riders on,” says Valerie Vizcarrondo.  The Dutch Warmblood influence is a fairly new development and happened as a result of Finn’s travels, “On my trip to Holland to VDL, at the top of the range was Indoctro, a very good show-jumper himself but a famous show jumper sire so we used him. She’s out of an Anglo Arab mare who went two star, and she’s seven and went two star this year with Katey.” Katey concurs that although perhaps ideally she might be a hand higher, Katey is herself petite and adds that she went inside the time at all her intermediates easily, and Finn agrees, “We were  so delighted with her we did use the stallion again and now have a rising three year old colt.”
– 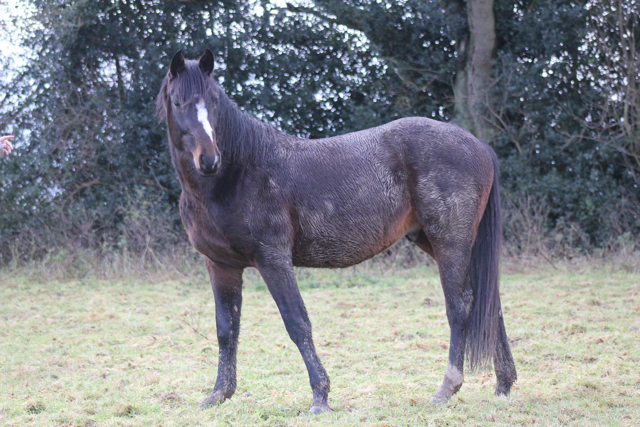 Incognito, a three year old colt by Indoctro and out of Turkish Candle

“The idea of using the Indoctro blood is to get a little more trainability and a little more snap in the front end, sometimes the thoroughbreds have a tendency to dangle their front legs. She (Imbroglio) hasn’t got the big movement but the brother (Incognito) has. He’ll be broken in the spring, but we have already used him as a stud. After he covered two mares we had to turn him back into a colt in which we succeeded: we turned him out with a big gelding and told him he’s not a stallion any more! We did it with Jazz and Persiflage as well and the advantage is he’s already proven by the time he’s already competing at a fairly high level, but it does definitely depend on the stallion.”

As many breeders will tell you an awful lot also depends on the mare, and Incognito is by Turkish Candle, who Finn, Rebecca and Rory all think may be good enough to be a foundation mare for Biddesden in the future. 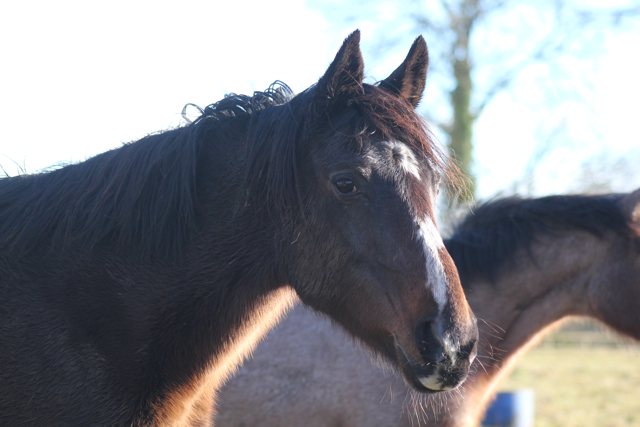 Turkish Candle competed up to intermediate level with  Canadian rider Vanessa Fenwick before starting her career as a brood mare at  Biddesden.
– 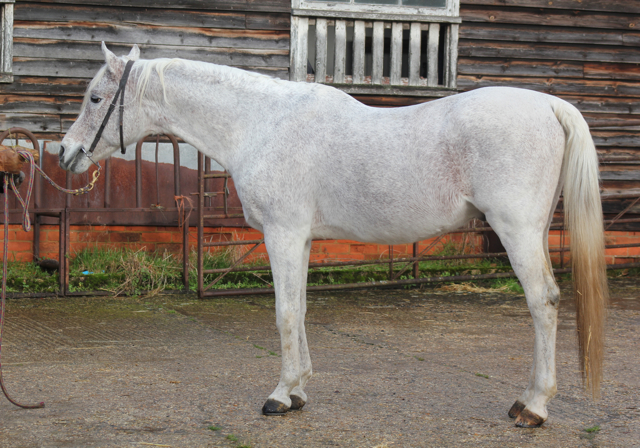 Sisyrinchium, a 22 year old pure-bred Arab Stallion “has produced quite a few nice eventers over the years,” and Vanessa Fenwick also brought over the current Jessie Phoenix ride, Biddesden-bred Erodium  who is by Emilion and out of a half sister to Sisyrinchium.
– 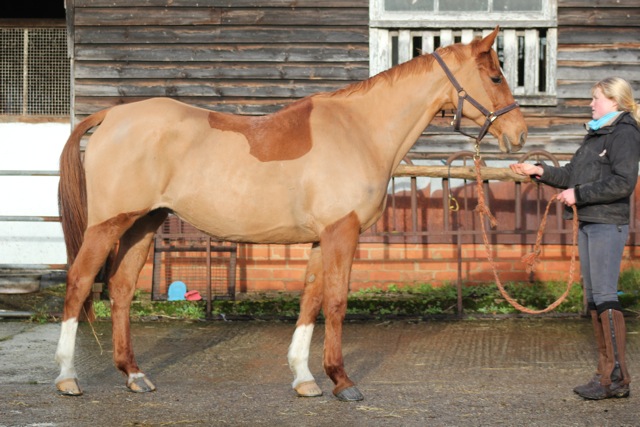 Piquante’s mother Thais,  a 1995 mare by Tarnik (sire of Tamarillo) and brought in to hunt this season as her swansong as she was not in foal this year.  It was almost by chance that Finn bred Tamarillo, or perhaps you could say it was meant to be?  “I first saw Tarnik when I was competing against him in a marathon; Tarnick won and my horse Ansty came second but I’d spent many, many miles admiring his back end and knew I wanted to use him! The years passed and then he came over to visit and we bred to him.” The rest, of course, is eventing history: to scratch the surface Tamarillo won Badminton with William Fox-Pitt in 2004 and was second there in 2002 and 2005, he won Burghley in 2008, an individual silver and team gold medal at the European Championships at Blenheim in 2005 and Team Gold at the WEG in Aachen in 2006.  Finn tried to put his finger on what made Tamarillo so good,

“Watching his lateral movement, he found crossing his hind leg very easy which a lot of thoroughbreds find difficult to do, and he turned out to be a very good cross country horse. It may be that of course he did have a very good rider, and they developed their careers together; he really made William I think, and William made him  –  they found each other at just the right time.  It is so surprising that he was so brave because he was so very spooky and it doesn’t seem to be the same thing as being cowardly! I do remember William riding him right up to the crowd around the dressage ring trying to get him do his spook before he went in, but he did gradually get better. It was so surprising to see a horse do that and then go out and do these enormous jumps cross country. Funnily enough, watching him go round Badminton he would gallop round with his ears pricked and I asked William about that later, and he told me he thought it was because he found it so easy; for most horses it’s very hard, those are very big fences and when they’re under extreme exertion they don’t put their ears forward, so maybe that’s what it was:  he just was a very athletic horse and brave, and so it just seemed to be very easy for him.” 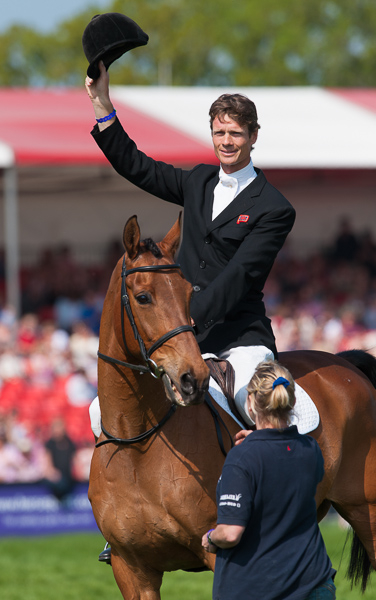 Tamarillo retires in an emotional ceremony after the show-jumping at Badminton. Ridden by William Fox-Pitt and pictured with long-time groom Jackie Potts. Photo used with kind permission by Nico Morgan. During the season check his website regularly for the best competition pictures, but at this time of year be sure to browse his website for unrivaled fox-hunting photos.

I imagine Finn must regret not keeping Tamarillo entire, “Oh Gracious yes, but we had no idea where he was heading, and we have all sorts of plans to over come that!”   You can stay up to date with those plans by visiting the Biddesden facebook page, or please visit their website if you’d like details on contacting them.  Connections to the Tamarillo line are in Persiflage’s dam’s family, and this season Biddesden will start shipping his semen to the US, Canada, Australia and New Zealand.  In fact in a later email in which Rebecca is trying to patiently untangle the bloodlines for me she muses that Tamarillo, Persiflage, Sisyrinchium and Erodium can all be traced back to their foundation mare Dafinetta who was originally bought in the ’30s by her grandmother. 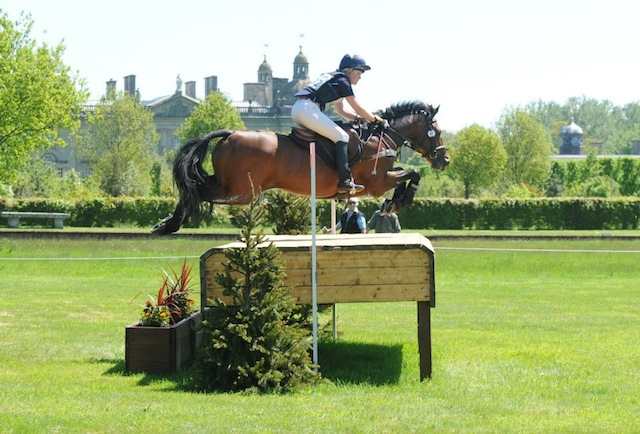 Persiflage at Houghton last May. Photo by Photosynergy used with the kind permission of Biddesden Stud.

Many thanks to the Guinness family for so kindly showing me all the horses in the rain during the Christmas holidays and their collaboration with this article, and thank you for reading. Go Anglo Arabs and any and all crosses in between, and Go Eventing!