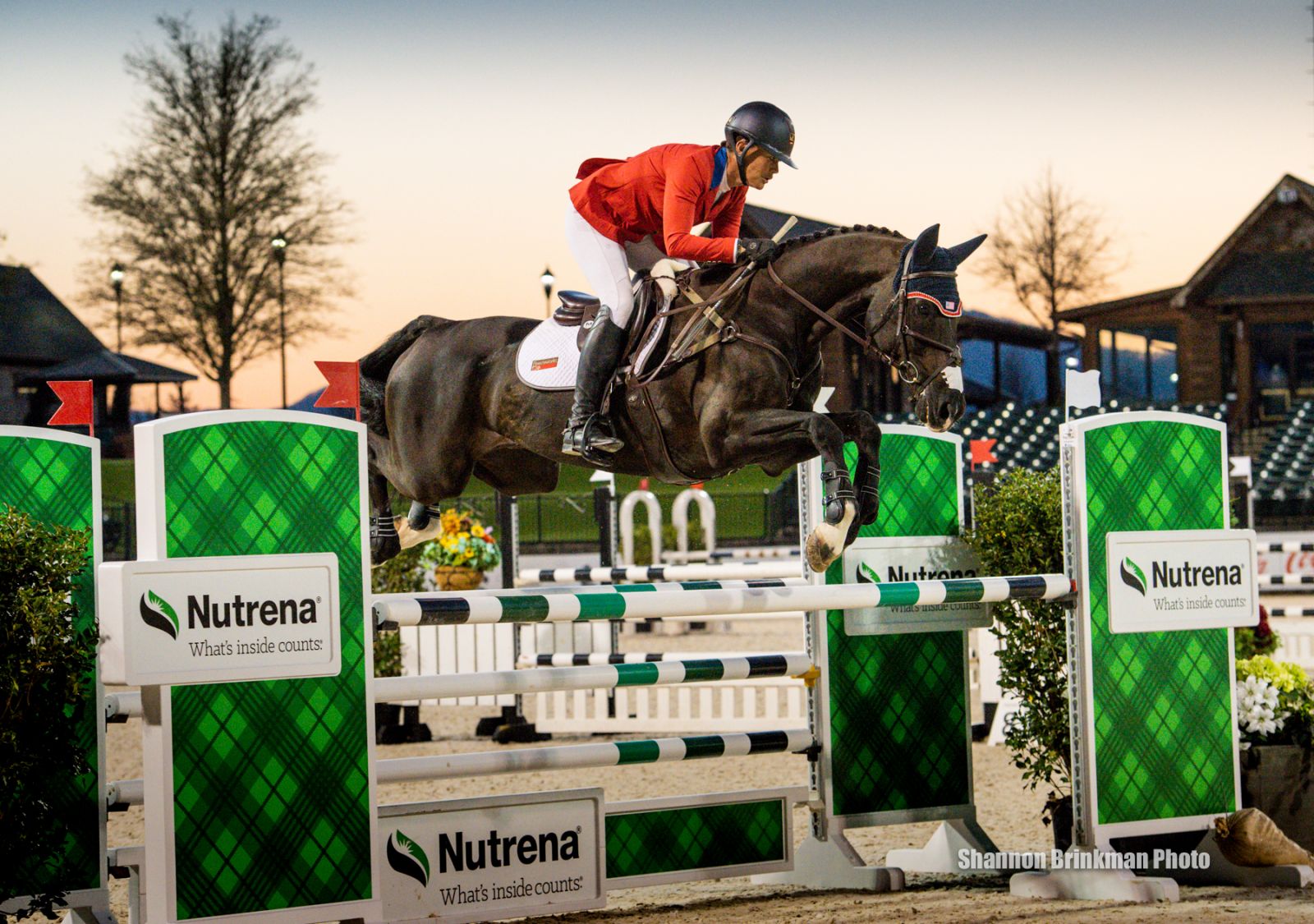 This article has been updated on 4/4 with additional information and quotes from the official press release.

Reporting on an event remotely in the absence of a live stream presents a challenge, but it’s one we’re happy to navigate thanks to the help of photographer Shannon Brinkman. Action condensed into two days kicked off today at The Fork at Tryon International Equestrian Center (TIEC) presented by Nutrena, and it’s Tamie Smith and the Ahearn family and Eric Markell’s Mai Baum leading the charge in the ProElite CCI4*-S division after dressage and show jumping’s completion today.

Tamie and the 15-year-old German Sporthorse gelding by Loredano out of Rike earned a career-best at the four-star level in the dressage, riding before judges Mark Weissbecker and Gretchen Butts, scoring a 20.4 to best their previous FEI best of 21.9 (CCI3*-S, 2019). “Lexus” wouldn’t be one to lower a rail at this level, and though he and Tamie collected two seconds of time as the sun set on Tryon, their two-phase score of 21.2 was enough to keep them atop the leaderboard.

“Like any competitor, you can always find places where you can improve, but he’s just super consistent,” Tamie reflected. “The things we’re improving are very miniscule, really. I was really pleased with him. He’s such a professional in the sandbox.”

While Tamie herself has competed at TIEC before, Mai Baum is a Tryon first-timer, but wasn’t fazed by the atmosphere in Tryon Stadium, she reported. “I wouldn’t have been in a stadium like that with him before, and he’s never been here to Tryon. The atmosphere in the stadium is quite electric, and he’s a careful horse, so sometimes that can work against you, but he was super confident and felt great.”

A confident ride in a new, exciting environment was exactly what Tamie was hoping to get from her experience before heading to contest the Land Rover Kentucky Three-Day Event, she revealed. “I thought that it would be a good idea to come to Tryon to get the electric, big arena atmosphere, because that’s how Kentucky is going to be. I wanted to get a read on the horses leading up to Kentucky, so I’m just really pleased with how he handled it, and he’s super rideable and confident,” she detailed. 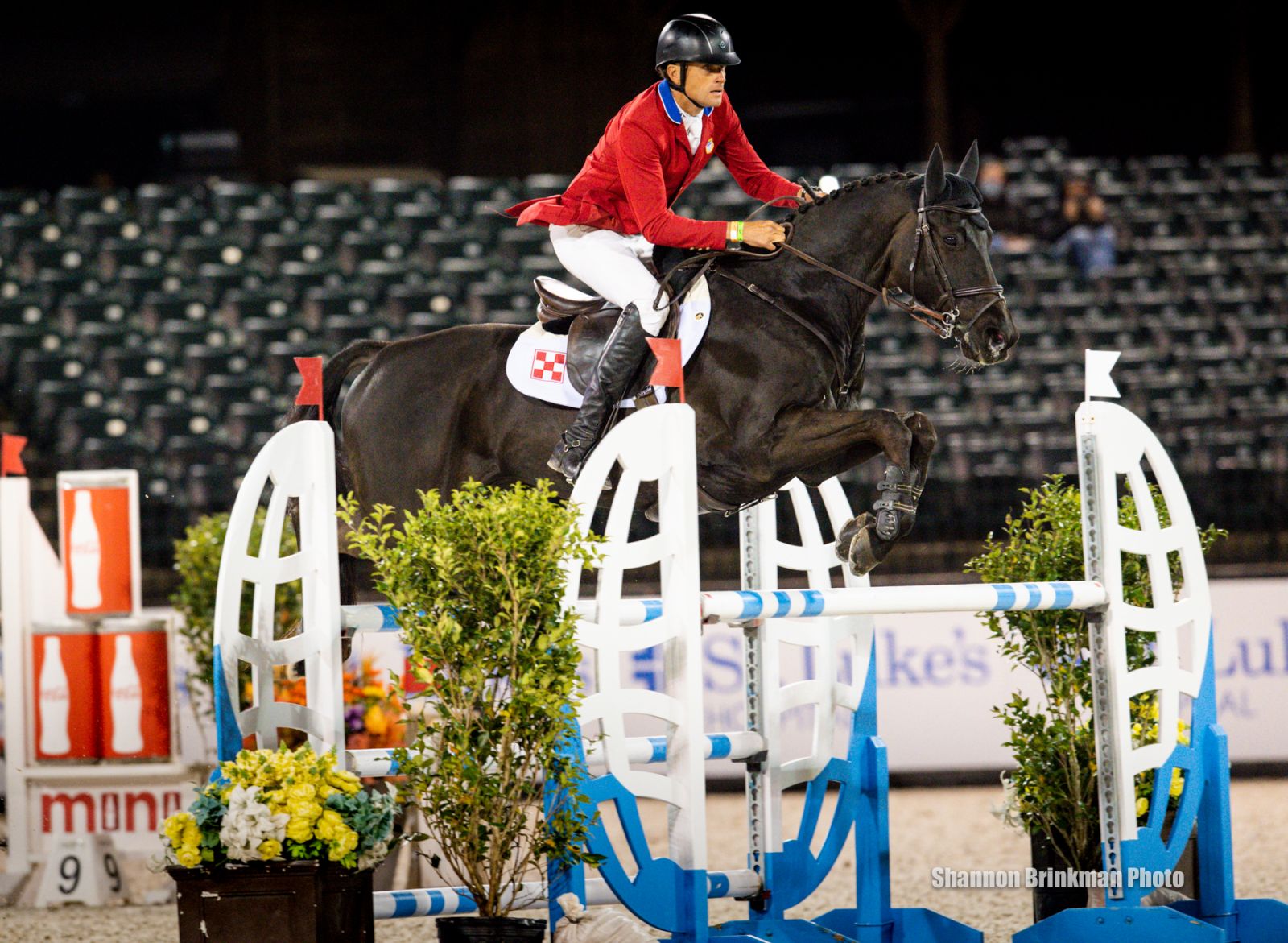 Turning in one of only five double clear rounds on Michel Vaillancourt’s show jumping track were second-placed Boyd Martin and Christine, Thomas and Tommie Turner’s Tsetserleg TSF (Windfall – Thabana, by Buddenbrock), who will go into tomorrow’s cross country with a score of 23.7. Boyd and the Turner family’s On Cue (Cabri d’Elle – On High, by Primitive Rising) are also inside the top five after two, sitting fourth on a 26.6. 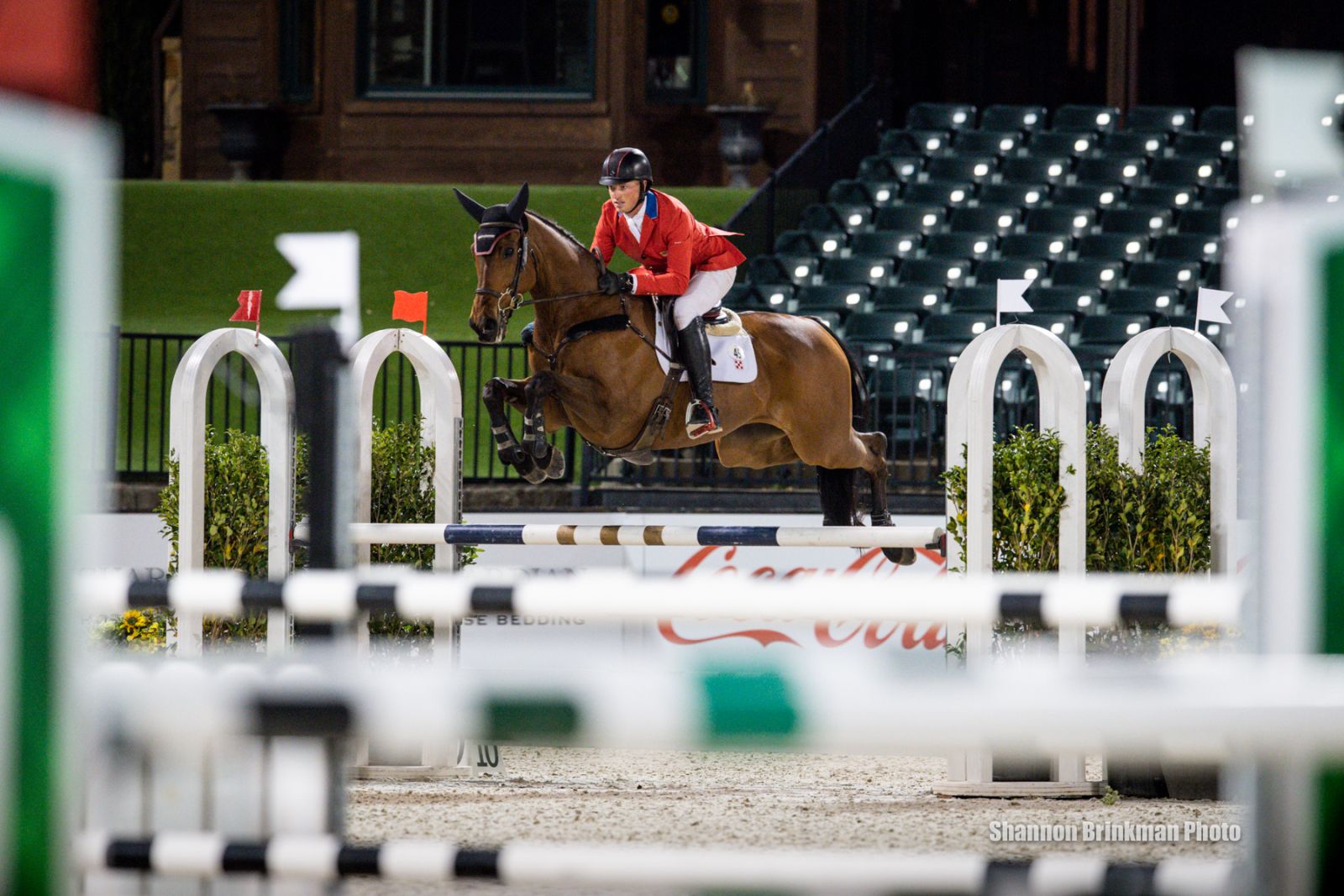 Doug Payne and Debi Crowley’s Vandiver (Windfall – Visions of Grandeur, by Mystic Replica xx) move one spot up into third overnight thanks to their double clear round, leaving them on a two-phase score of 25.7. Rounding out the top five are Liz Halliday-Sharp and The Monster Partnership’s Cooley Moonshine (Cobra – Kilpatrick Duchess, by Kings Master), who finished second in the 7-year-old Young Horse World Championships at Le Lion in 2019 (and third in the 6-year-olds at Le Lion in 2018). 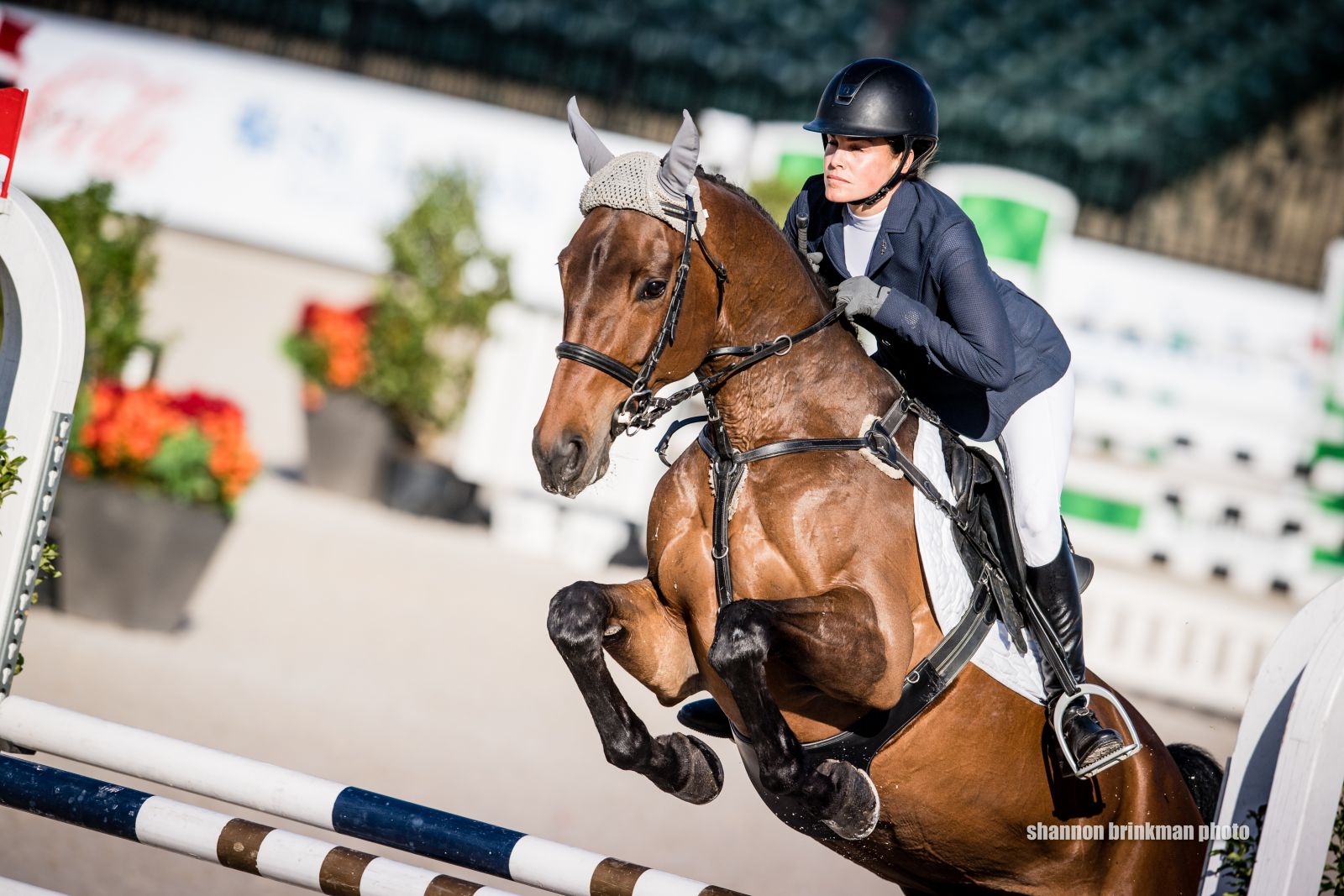 In the CCI3*-S division, it’s Lucienne Elms with Horse Scout Eventing LLC’s Tremanton (Birkhof’s Grafenstolz – Trevia, Hand In Glove) in charge after two phases on a score of 28.9, moving up from third after dressage. This is the first CCI4*-S for Tremanton, a 9-year-old British Sport Horse mare with whom Lucienne has been partnered since 2020.

“She’s still very green at the 3* level, and just did her first one last month with me at Stable View. Dressage today was the best result that she has had at the FEI level. She’s a very nice moving mare,” Lucienne explained, “but she has a tendency once she gets in the arena [to let] tension interrupt her lateral work, and today was the first time that she really let me ride her, so I am thrilled for that! It was the biggest track that she has jumped, and I was pleased that she jumped really cleanly, [for] a nice confident round.”

“I have to go steady with her tomorrow. It wouldn’t be in her best interest for me to try and make the time because she is still very new to this level. I would like to keep her in a rhythm that keeps her in a fairly decent position. She is really one that I want to produce slowly and properly,” Elms emphasized. “I have no doubt at all that one day she will be back in the lead and I can then put my foot [on the gas] a little bit!”

“I think he’s handling the atmosphere really well, and he went into both the Dressage and Show Jumping and just was on task, and jumped well and confidently,” Maya said in the event press release. “He was really rideable and really as good as he could be for this point in his training and his career.”

Last but most certainly not least in the international divisions this weekend, Austin Skeens and Heather Skeen’s What Gives (Spring At Last – All the Words), moving up from second into first to tackle cross country on a two-phase score of 31.4. This is also an FEI debut for this pair, who most recently finished fourth in the Open Modified at Carolina International last month. 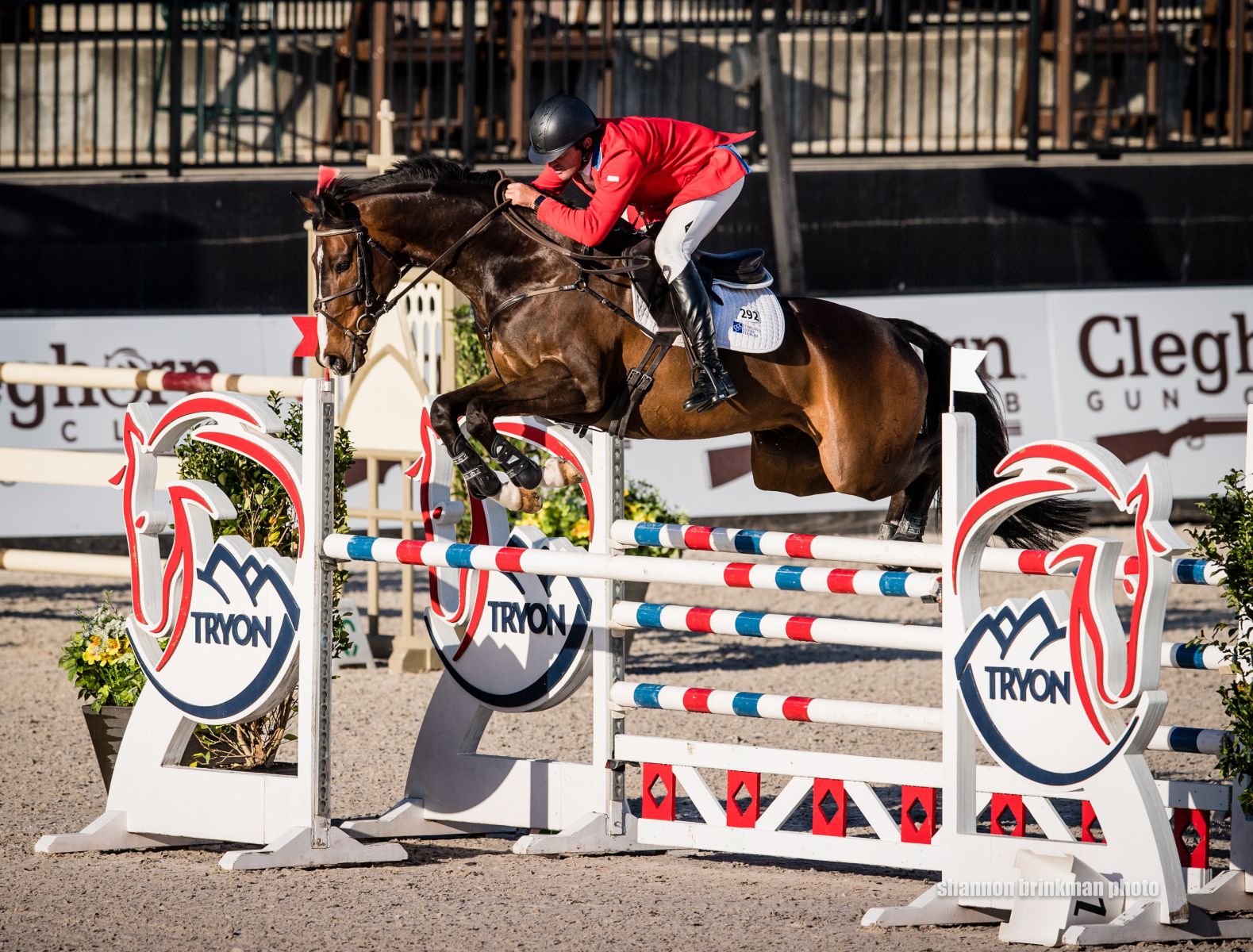 Two Advanced divisions are also running this weekend, and after dressage and show jumping it will be Will Faudree with Jennifer Mosing and Sterling Silver Stables’ Mama’s Magic Way (Mighty Magic – Straightaway, by Star Regent xx) in the lead of the A division on a score of 35.8; Boyd Martin and the Luke 140 Syndicate’s Luke 140 (Landos – Omega VI, by Limbus) in charge of the B on a score of 28.3.

Many of these horses, including four-star leaders Mai Baum, Tsetserleg TSF, Vandiver, and On Cue (as well as many others in the four-star and Advanced divisions this weekend) are in their final prep stages for the Land Rover Kentucky CCI5* at the end of April. Capt. Mark Phillips’ four-star track tomorrow consists of 35 jumping efforts with an optimum time of 6 minutes, 31 seconds. Check out a preview of the track: 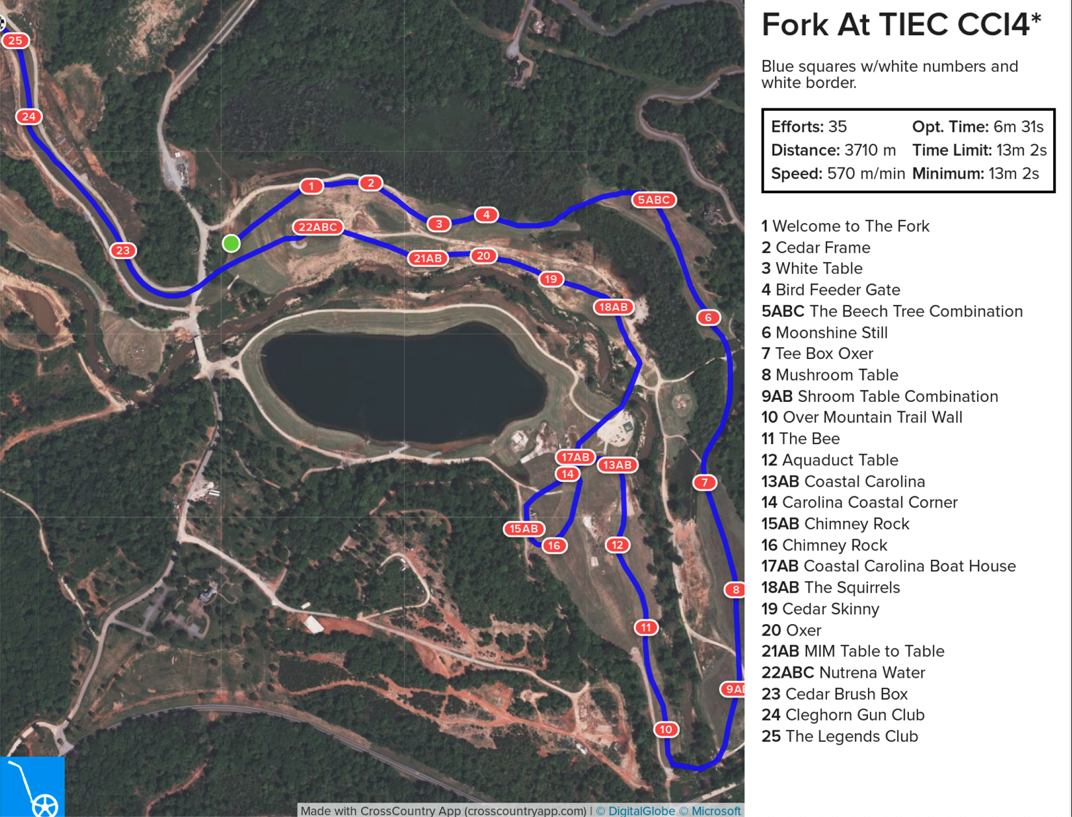 Many thanks to Shannon Brinkman for the gorgeous shots from today’s action – you can order your own show photos from this weekend by clicking here. We’ll be back tomorrow with a final report – and we will also update this report with additional details as they are made available. 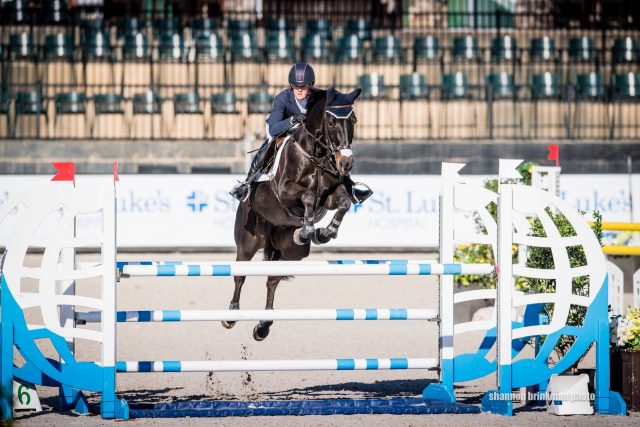 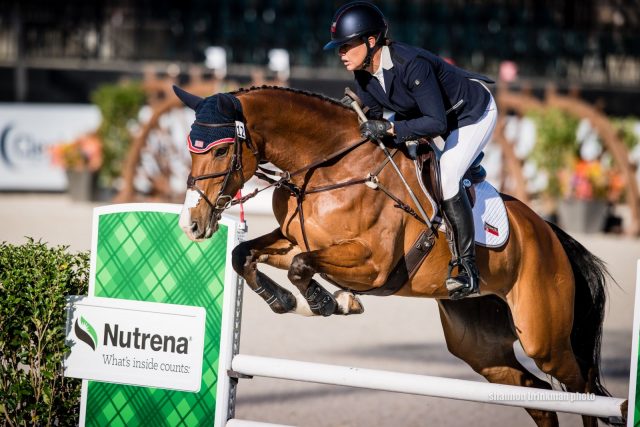 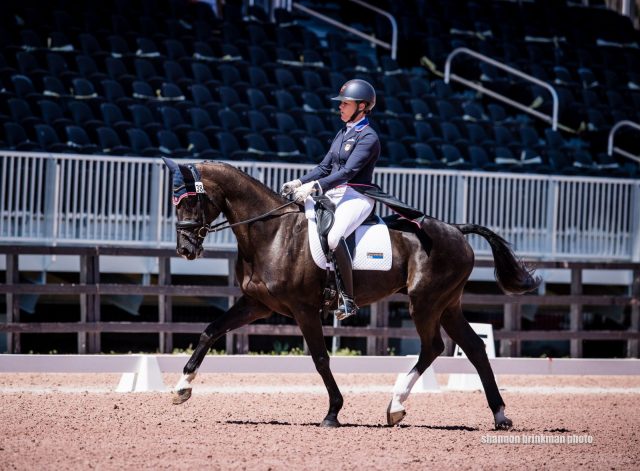 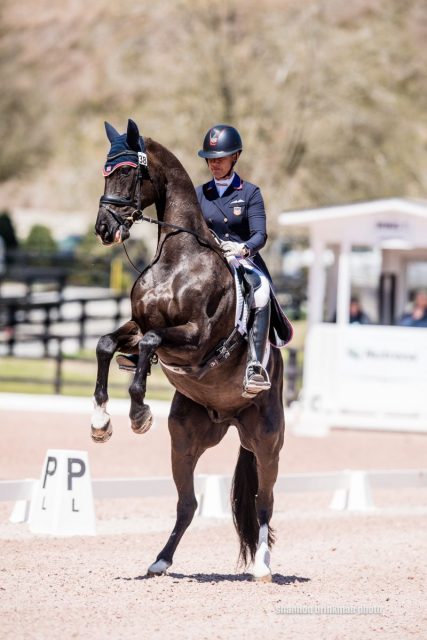 Mai Baum gets his extra energy out. Photo by Shannon Brinkman Photography. 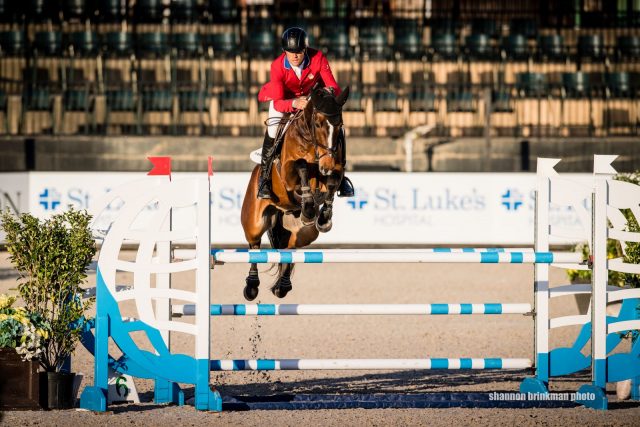 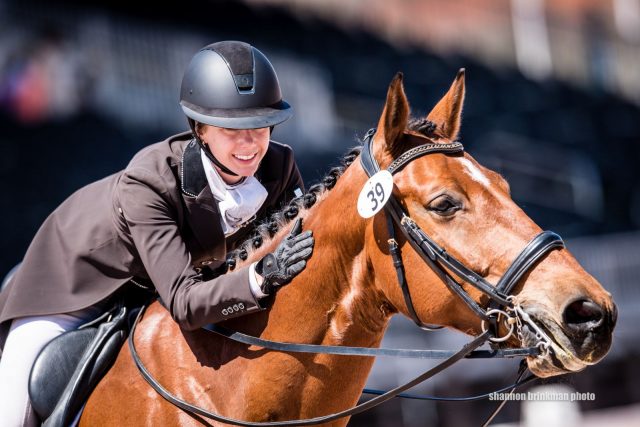 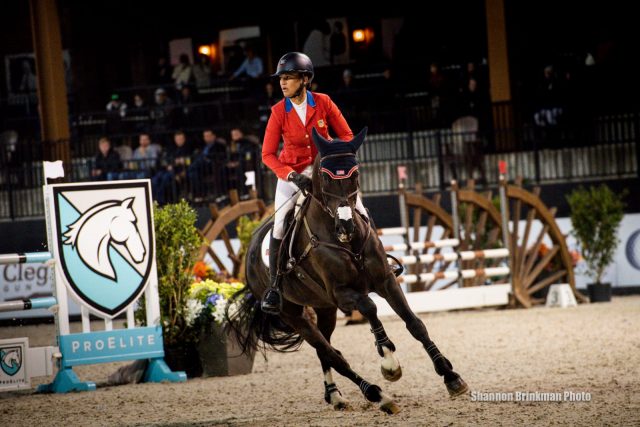 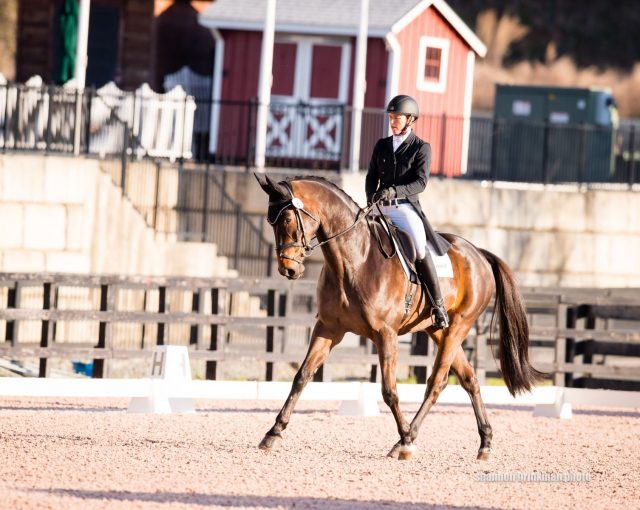 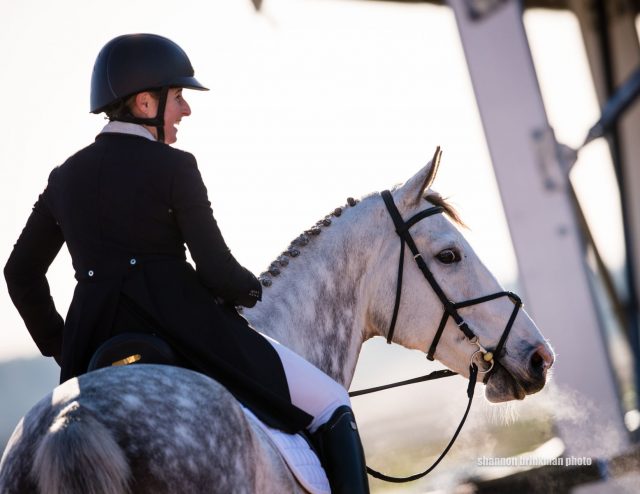 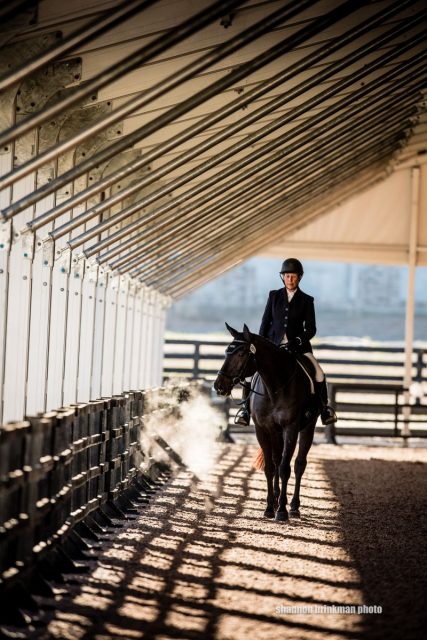