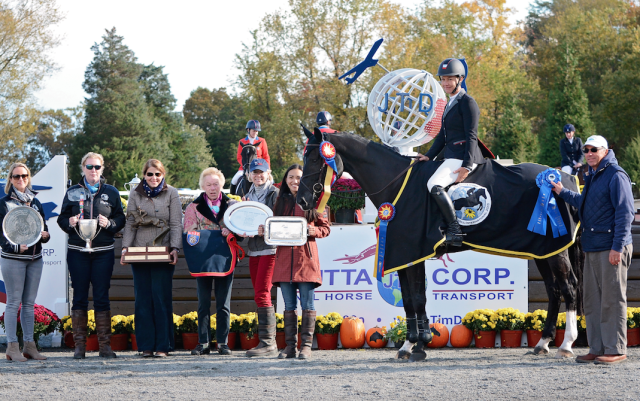 There’s rising to the occasion under pressure and then there’s riding with the weight of the world on your shoulders. Tamie Smith did both today when she clinched an emotional win in the Dutta Corp/USEF Three-Star Eventing National Championship with Mai Baum.

Tamie has been competing all weekend knowing that her dear friend Dylan Morris’ battle with stage 4 stomach cancer was about to come to an end. Tragically, Dylan lost that battle early this morning. Tamie has said all weekend that she was riding for Dylan. She ultimately gave him the win.

And she won in dominant fashion, leading wire-to-wire in Mai Baum’s first CCI3*. The 9-year-old German Sport Horse gelding owned by Ellen and Alex Ahearn and Eric Markell jumped a beautiful clear round with 2 time penalties today to win on 40.5 — that’s their fourth FEI win in a row.

“He was super,” Tamie said in this afternoon’s press conference. “He’s normally pretty spooky in the ring, and he wasn’t at all. He just went in there and was all business. I’m just really, really proud of the ride, and he jumped fantastic; he jumped his guts out.”

Tamie has worked hard on the show jumping with this horse since pulling two rails at the Pan American Games prep trials at Great Meadow in July, training with Susie Hutchinson and taking “Lexus” to a number of jumper shows to get him comfortable in the ring. “He is a spooky, careful horse, which is what you want, but he just needed to get a bit more seasoned at it,” she said.

So what did it feel like to take the biggest win of her career today? “It’s unbelievable, actually … I’ll never forget the phone call I got from Alex when she said, ‘I have something to tell you, and I think you’re going to like it.’ And we went and met for dinner, and she said, ‘I want you to ride him.’ And I was like, ‘Whoa, let’s think this through, because I don’t know if you know what you’re saying to me right now,'” Tamie said.

“So the second that it was a real thing — that I had a spectacular horse underneath me — it’s been such a pleasure, because I have ridden a lot of difficult type horses throughout my career and some that maybe didn’t have the talent that they needed to have to do the level, but that’s what I had. He’s got everything. He’s the whole package, and it’s just an unbelievable feeling to be sitting on him. I can’t even explain it; it’s unreal. I am blown away every time I ride him.” 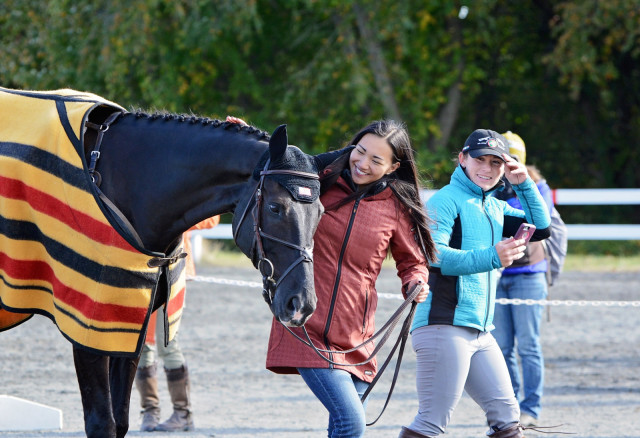 Alex Ahearn, one of Mai Baum’s owners and his former rider, gives him some love before the prize giving. Photo by Jenni Autry.

As for what’s next for Lexus, Tamie said it’s too early to be thinking about taking the horse to his first four-star, and instead she’s considering using the free international flight she won today courtesy of Dutta Corp to target a spring CCI3* overseas. Then there’s also Boekelo to consider — “I have a bone to pick with them,” Tamie said. “I’d love to get back there, and I think he’d be competitive there.”

Phillip Dutton said he “probably had the luckiest round today” after Mighty Nice rubbed a couple rails on Sally Ike’s CCI3* course but ultimately left them all up, crossing the timers with 2 time penalties to finish on 45.5 as the Dutta Corp/USEF Three-Star Eventing National Reserve Champions in the horse’s first Fair Hill appearance.

“The show jumping’s been a bit tough for us, but he left them up, and I’m pleased for him,” Phillip said. “It’s one of those things that you take every event and be grateful. He hit his stifle at Kentucky and so he didn’t get to finish, and he got to finish here. He’s got a lot of improving still ahead of him, but he’s a great horse, and I’m lucky to have him.” 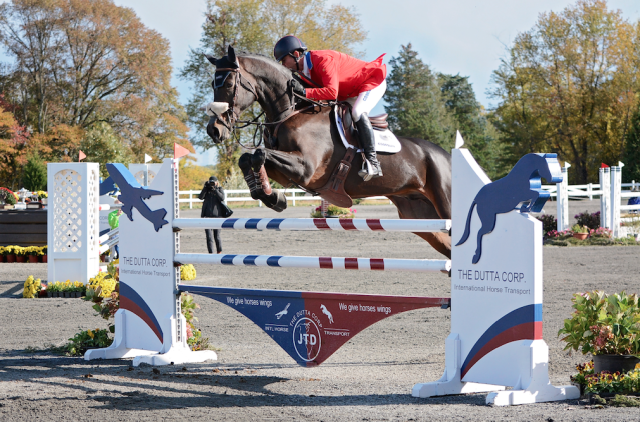 Fair Hill seems to suit Kim Severson and Cooley Cross Border. After finishing as the Two-Star Reserve Champions last year, “Crossy,” an 8-year-old Irish Sport Horse gelding owned by the Cross Syndicate, quietly stalked the top of the leaderboard all weekend in the horse first CCI3*.

Kim and Crossy sat in sixth place after dressage on a score of 46.6, then jumped clear on cross country with just 0.8 time penalties, and jumped one of the seven double clear rounds over Sally Ike’s show jumping course today to finish in third place on a final score of 46.6.

“He really seems to like Fair Hill. He’s really stepped to the plate the two times he’s been here. His dressage was, I thought, very good for him. He got most of his changes, which is huge for us. He could have been a little bit more consistent in his medium trot; he’s not strong enough yet,” Kim said.

“Yesterday he was unreal, and I actually gave him a decent ride, which I don’t say very often. I actually rode the horse well, and he appreciated it. Today he was spectacular. He’s just a lovely, lovely horse, and the mistakes he has had have been green, misunderstanding mistakes. He’s not a naughty, bad horse by any means.”

Like Tamie with Lexus, Kim is thinking of targeting a European three-star in the spring instead of aiming Crossy for his first four-star at Rolex.

Looking to the rest of the leaderboard, Boyd Martin and Steady Eddie moved from seventh to fourth place today thanks to jumping clear and inside the time, and Phillip Dutton finished a second ride in the top five in Tom Tierney and Simon Roosevelt’s Fernhill Cubalawn, who had the middle fence of the triple combination down to finish on 50.8.

That second element of the treble (12b), which was the final part of the course, fell a number of times in the three-star division, as did fence fence, a large white birch oxer at fence three coming off a tight rollback turn from a vertical at fence two.

Boyd Martin finished two more rides in the top 10, with Blackfoot Mystery having two rails down to finish sixth on 52.6 and Crackerjack pulling one rail to finish seventh on 54.2. Buck Davidson and The Apprentice had one down to finish eighth on 57.6. Ryan Wood also had a super weekend, finishing all three of his rides in the top 15 (Frankie, 10th; Fernhill Classic, 11th; McLovin, 14th).

Stay tuned for much more from #DuttaFHI, including a full video of the CCI3* press conference courtesy of Jamie Rees, plus our final thoughts on Fair Hill and a full list of all the award winners from today. Go Eventing. 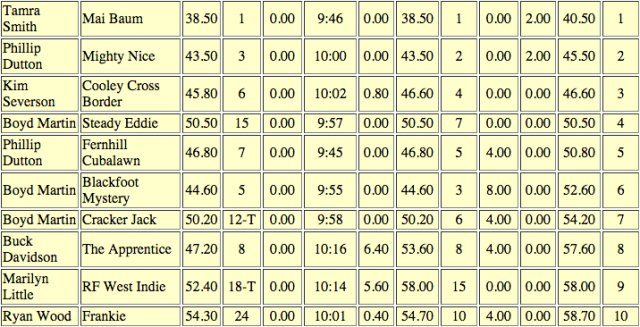