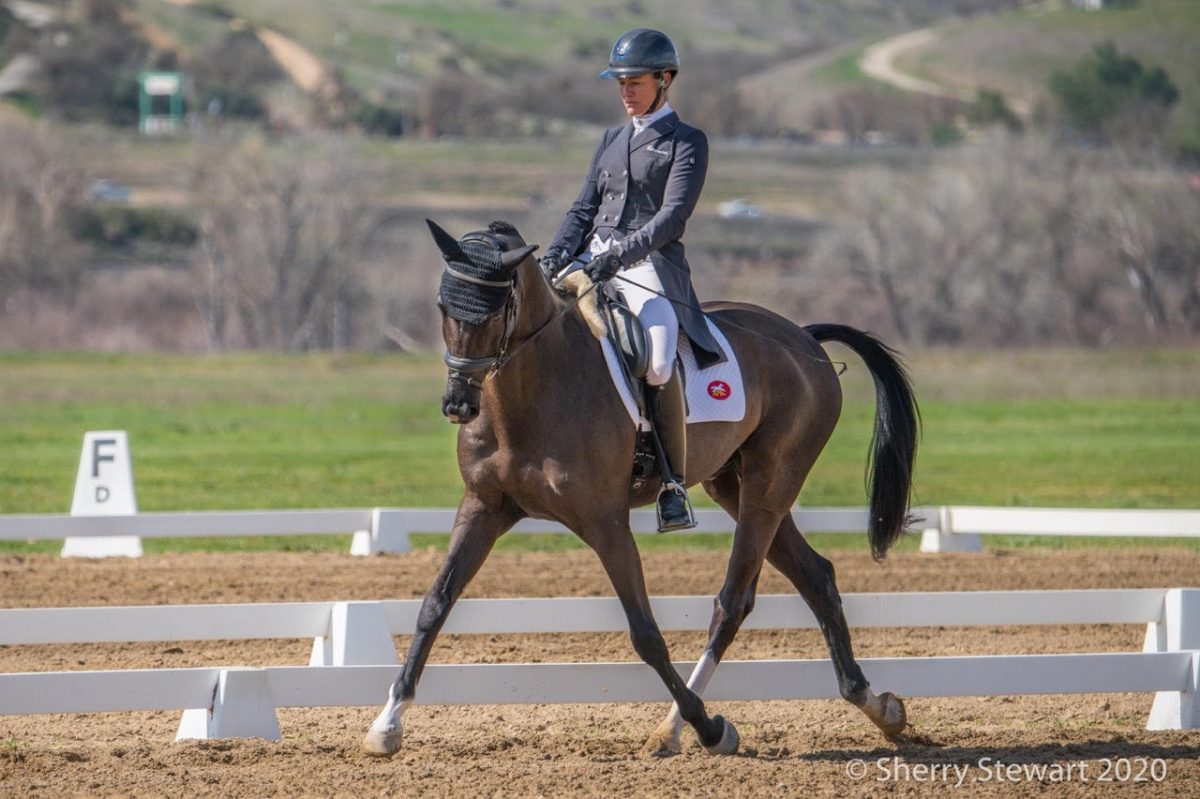 A total of 43 horses cantered down centerline today to kick off the $50,000 Liftmaster Grand Prix Eventing at Bruce’s Field in Aiken, Sc. Riding FEI CCI5* Test A before the judging panel of Mark Weissbecker (C), Debbie Adams (E), and Jame Hamlin (H), a healthy mix of seasoned competitors and rising stars – many of which are Land Rover Kentucky-bound – gave us an early glimpse of what they’ve been working on this off-season. That practice paid off for Tamie Smith and 2020 USEA Rider of the Year Liz-Halliday Sharp, who will take all top four spots on the leaderboard into this afternoon’s show jumping.

Tamie Smith made another trek from her home base in southern California to the East coast this season and laid down the professional performances we’ve come to anticipate with the Ahearn family and Eric Markell’s Mai Baum (1st – 23.3) and Ruth Bley’s Danito (2nd – 24.8) to grab the first-phase lead.

Mai Baum had a quiet year in 2020 but has made the trip east with his stablemates this year to aim for – and it’s almost hard to believe, given the 15-year-old German Sport Horse gelding’s breadth of experience – his first go at the CCI5* level in Kentucky. “He likes to show off and he knows when it’s time,” Tamie told Frankie Thieriot after her ride aboard “Lexus”. This pair is certainly no stranger to competitive dressage scores, setting a USEA Advanced record in 2020 with a 17.7 at Rebecca Farm and previously earning an FEI personal best of 21.9 at Galway Downs in 2019. It has to be a great feeling for Tamie to have her old friend back in action – certainly taking a ride on Mai Baum feels akin to coming home.

Ruth Bley’s Danito, a 12-year-old Hanoverian gelding, completed his first season at the Advanced/4* level in 2020 and looked to have grown even more confident and comfortable in his body over the off-season. Tamie is well-respected for her quiet technique on the flat, allowing horses like Danito to really shine in their natural talent. These skills reflect on Danito’s record, as well: he’s earned a sub-20 score once at the Advanced level and has an FEI personal best of 24.1, nearly beaten by today’s performance that brought a 24.8.

“He was super,” Tamie said. “He can get a little bit tense and he’s still a little bit green at the changes, but he stayed with me the whole way and just tried his heart out. I think it’s one of his better tests.”

Also dynamically competitive on the flat is Ocala-based Liz Halliday-Sharp, who brings two horses in the top 10 forward to the jumping phases. Deniro Z, a 13-year-old KWPN gelding owned by Ocala Horse Properties, looks not to have missed a beat since his last big run at Tryon in November, earning a 25.8 as the second last horse to go before the judges this afternoon. Deniro Z has contested two CCI5* events in his blooming career, and today’s performance is his best score of the bunch (28.4 – Burghley, 2019 / 30.9 – Kentucky, 2019).

On the topic of old friends, we also saw Liz’s old campaigner Fernhill By Night out for a spin, taking fourth place into show jumping with a score of 26.0. Liz told Frankie after her ride aboard “Blackie” that the 18-year-old KWPN gelding owned by Deborah Halliday was happy to be there this weekend; he’s proven himself to be a stalwart short-format competitor as he’s gotten older so look for him to nip right around these technical jump tracks today and tomorrow. Stablemate Cooley Quicksilver, owned by The Monster Partnership, earned a 30.0 for 11th place after dressage.

Buck Davidson got his weekend off to a great start with Katherine O’Brien’s Carlevo, scoring a 27.1 to complete the early top five. Buck and the 14-year-old Holsteiner gelding had a competitive year in 2020, finishing in the top three in five out of seven starts. This season, they’re off to a rocking start as well, picking up two early wins at Rocking Horse in January and February.

Boyd Martin also enjoyed a good day in the sandbox, bringing each of his three horses into the top 10. After kicking the day off with The Long Island T Syndicate’s Long Island T and scoring a 28.3, Boyd would return later to tie himself aboard The Luke 140 Syndicate’s Luke 140.Rounding out the day was crowd-favorite Tsetserleg, the reigning USEF National Champion and Pan American Games gold medalist owned by Christine Turner, who slid ahead of his stablemates to take sixth on a 27.8.

Show jumping has just kicked off in reverse order of dressage standing, so we’ll have much more to come later this evening from Aiken. You can view the live stream on USEF Network here or on Horse & Country TV here. This post will also be updated with current photos as they become available.

Also of note is the charity challenge happening in conjunction with this weekend’s festivities. Riders have been divided up into color teams, each one representing a different local nonprofit or charity. You can go online to vote with a nominal donation for your favorite team – to view more information and cast your vote click here. 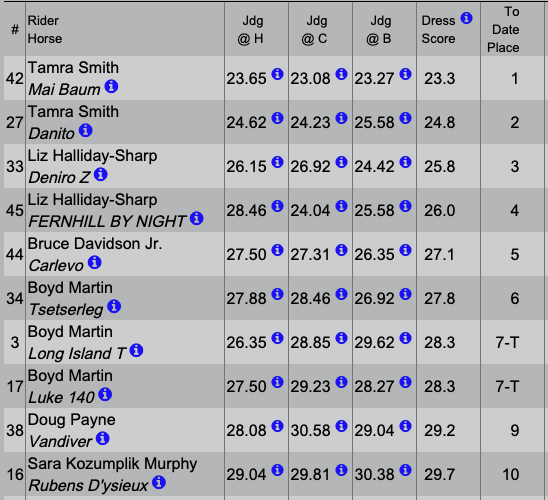