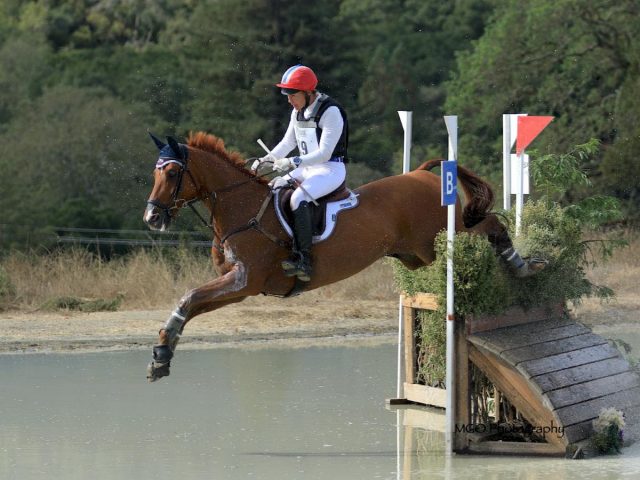 Tamie Smith swept all three of the international divisions — CCI4*-S, CCI3*-S and CCI2*-S — hosted by Woodside International this week.

Tamie Smith won the CCI4*-S from pillar to post with Danito, an 11-year-old Hanoverian gelding (Dancier x Wie Musik, by Wolkenstein II) owned by Ruth Bley. They completed cross country on Saturday with 7.6 time penalties to win on a final score of 33.6. 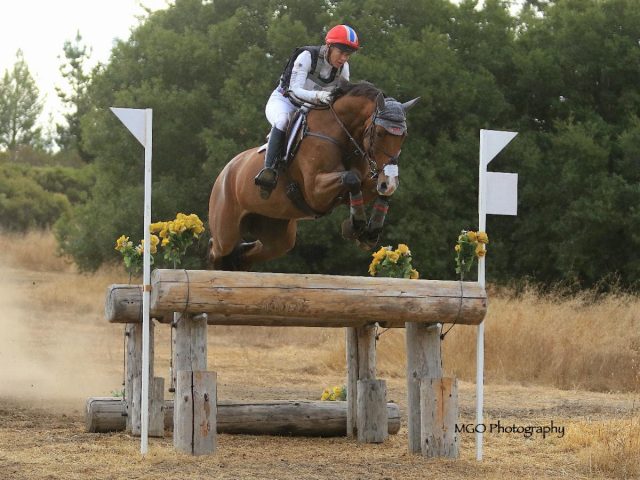 Tamie also led the CCI3*-S from start to finish with Solaguaryre California, a 9-year-old Holsteiner mare (Casparo x Solaguaryre Calandria, by Casall) owned by David and Julianne Guariglia. They had 8.4 cross country time penalties to finish on a score of 36.6. 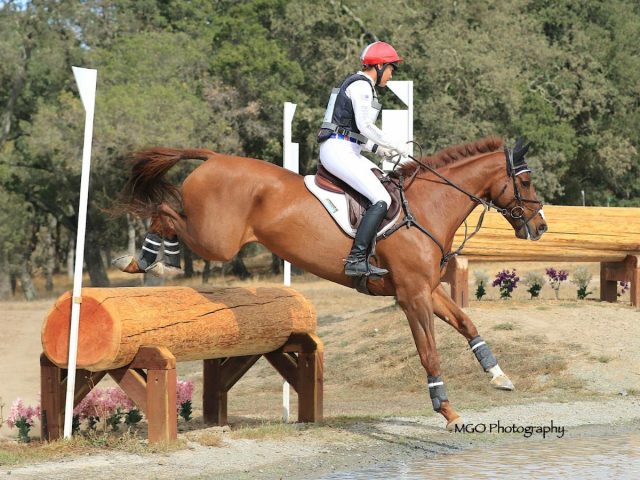 Tamie Smith and AEV Above Authority. Photo by MGO Photography.

Tamie won the CCI2*-S with AEV Above Authority, a 7-year-old Irish Sport Horse gelding (Lancelot x KEC Hazzanni, by Aldatus) owned by Marcella and Kai Ashton. The pair moved from fourth after dressage into the top spot thanks to double clear jumping rounds, to finish on a final score of 27.6.

“The courses were significantly different than they’ve been — super bold for riding and really technical lines and just really proper tracks,” Tamie says. “So it was interesting to see what they were going do because they haven’t really seen a track that that technical and they were all really great.”

Ian Stark’s course tripped up a few in the CCI4*-S field: Andrea Baxter with Indy 500 and Amber Levine with Cinzano both picked up 20; Derek Di Grazia with Ringwood Justice retired after a runout; and Charlotte Babbitt and 2 AM were eliminated. Tamie Smith had a technical elimination with her previously second-placed Fleeceworks Royal, and withdrew her third ride in the division, Passepartout, after dressage. Helen Bouscaren withdrew Ebay and Hilary Burkemper withdrew Undercover after show jumping. 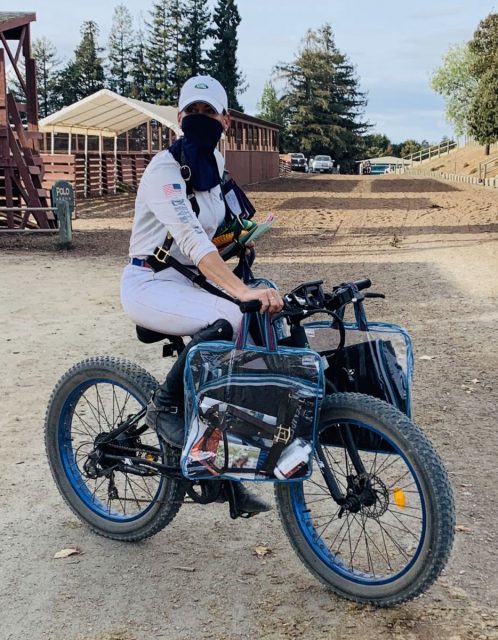 Tamie explained the TE with Judith McSwain’s 11-year-old Holsteiner mare (Riverman x Marisol): “I’m a bit bummed on my Fleeceworks Royal horse, I jumped the wrong blue trakehner but luckily she didn’t need the right the run and I got to get around for the most part and they all felt amazing. It was really fun out there today.”

Tamie had nine rides across the FEI divisions and one horse in the Training horse trial. She credits her Next Level Eventing team for keep the train on the tracks. “I mean they’re hustling so much,” she says. “I couldn’t do it without the amazing people behind the scenes … Bridget [London] kind of runs the show and she keeps everybody in line but it’s every single one — they’re icing and just the attention to detail, I honestly don’t know how they do it but they do and I’m super grateful for them. I couldn’t do it without them.” 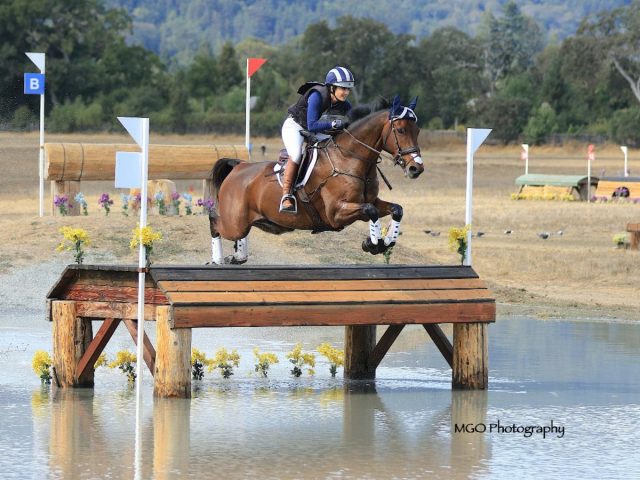 Erin Kellerhouse and her own Woodford Reserve, a 9-year-old Irish Sport Horse gelding (Tinaranas Inspector x Laharns Laughton), finished 2nd in the CCI4*-S. The pair was third after dressage and moved up into second following Fleeceworks Royal’s TE. They turned in the second fastest cross country round of the division, collecting just 4.8 time penalties.”He came out of the box wanting to go fast, I didn’t have to push him he wanted to run,” Erin said of ‘Woody.’ This was the pair’s last run before the CCI4*-L at Galway Downs in a couple of weeks.

Emilee Libby and Jakobi, her and Linda Libby’s 11-year-old Belgian Warmblood gelding (Ustinov x Expression, by Coriano), moved steadily up the CCI4*-S leaderboard throughout the competition, from 11th to sixth to third. Tamie and En Vogue went just a wink faster, collecting 4.4 cross country time to finish 6th after a solid dressage test but a tough show jumping go. 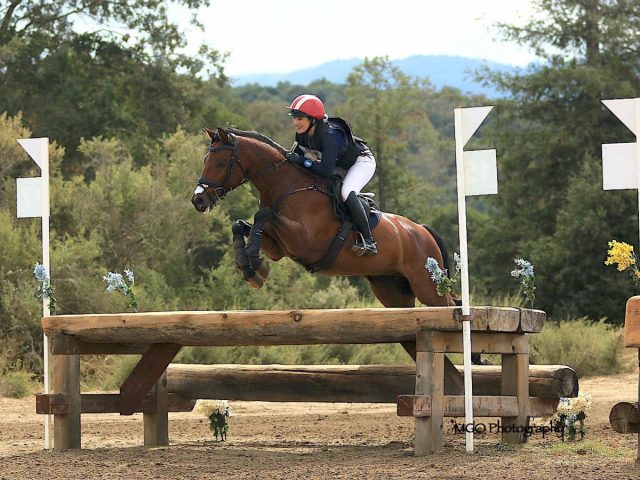 Lauren Billys and Can Be Sweet. Photo by MGO Photography.

Lauren Billys was fourth in the CCI4*-S with her 2016 Rio Olympic Mount Castle Larchfield Purdy, an 18-year-old Irish Sport Horse Karistos x Hallo Purdy) gelding owned by the rider and the Purdy Syndicate.

She recapped her results: “With ‘Purdy’ it was my first Advanced run since Fair Hill last year because of Covid so it was a big track and I was really happy to get out there with him again. He had a great round — he felt super strong and just ate the whole course up, just really happy to be out there. What Ian set was challenging and really was a great test for us and now he’s qualified for Tokyo again so that was a really big thing that we wanted to get done this weekend.”

Lauren is aiming to bring Purdy to either Galway or Tryon. “I have to figure out what the right plan is for him to lead up to Tokyo next year,” she says. “He’s an older horse and he’s done a lot for me, and I just want to make sure I serve him and that we’re prepared but not overrun.”

Lauren also finished second in the CCI2*-S with Can Be Sweet. “He’s just an awesome horse. I had so much fun riding in this — he’s full of scope and he’s just such an athletic partner so I had fun challenging him today on the course and it felt easy for him so we’re shooting for the Galway Downs 2*-L and I think he’s ready.” 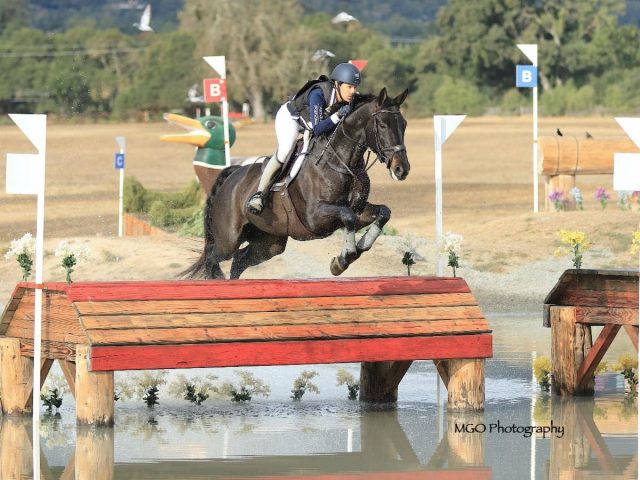 Second to Tamie in the CCI3*S was Rebecca Braitling and Arnell Sporthorses’ Caravaggio II. They had a great weekend only adding 3.6-time penalties to their dressage score. “I am thrilled with ‘Ernie’ — he’s such an exciting horse to produce,” Rebecca says. “I can’t speak highly enough of the competition here this weekend, it was top class and the cross country was seriously impressive.” This pair is also headed to Galway Downs in a couple weeks.

Woodside International concluded on Sunday with Beginner Novice through Prelim cross country. Make sure to follow along with all the excitement on Woodside’s Facebook page and keep up with live scores on EventEntries.com.