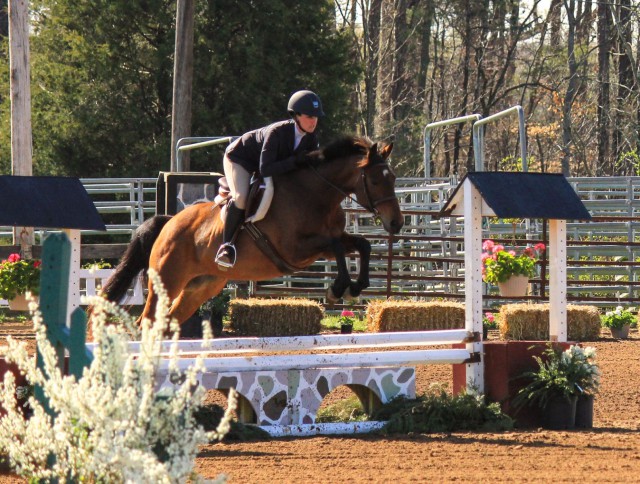 Shanti and me taking over the Hunter/Jumper world. Photo by Erica Stevens.

If you were to ask me how and when I started riding, I’m one of the few who literally never delved into the hunter world. I mean, ok, I did leadline classes when I was three and four, but I’m pretty sure that doesn’t count. If three-day eventing had leadline, I would have been all up on that. I’ve come to the age of twenty-seven, and before last weekend, had never competed in any hunter shows.

After returning victorious from The Fork with my two big champions, I got back to work with all the young horses, and was asked to help my boss, Erica, with her new horse, Shanti. Erica bought Shanti a few weeks ago, and she’s a lovely 15.1 hand, nine-year-old Trakehner mare that’s done a ton of fox-hunting and a little bit of hunter trials and such. It was my delightful duty to find out what she was like in the show ring.

It’s my firm opinion that a big part of success is looking the part. And so, my first step was to endeavor to find out what to wear and how to wear it. I texted a friend of mine from childhood who had competed in hunters all her life, and asked her if it was proper to wear a stock pin over my ratcatcher (it was not).

I dug out a shaped fluffy pad for my saddle, and ditched my breast plate. We found a D-ring bit and a plain caveson. I found some tan britches, because only full seated white pants were to be located in my regular show apparel bag.

The day before the show, I looked up official footage for the perfect five-stride line, and set up an outside-diagonal-outside-diagonal course in my arena. I decorated with fake flowers, and hopped on Shanti to practice not sitting my butt in the saddle, and going way far into the corners of the arena for literally no reason at all (other than that’s what you do). 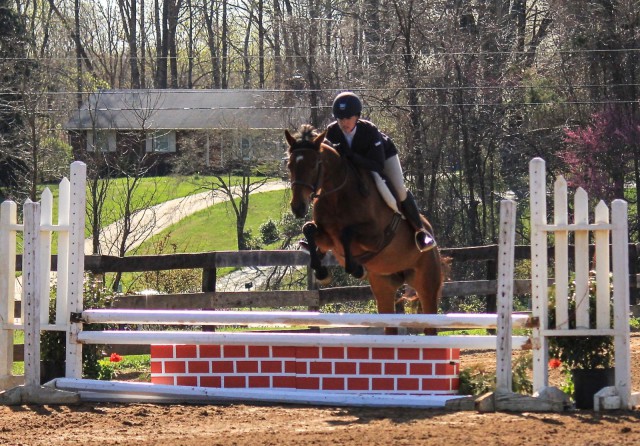 When we got to the show the next morning, I realized that I didn’t really know what the different kinds of classes meant, and I was totally not familiar with the proper behavior upon entering the arena, and had a few questions that would be too weird to ask some poor unsuspecting fellow rider. Luckily, I knew the in-gate steward, our local Southern States super-woman, Rachel Miller.

I trotted up to her, “Quick! Rachel! Teach me how to hunter? I have no idea what I’m doing.”

She looked at me askance for a few seconds, and then proceeded to answer my questions. Yes, you do a circle before your first jump, but only if it’s near the in-gate. You also do a finishing circle, but again, only if you end near the in-gate. Make your strides (five), try to land on the correct leads and if you don’t get your changes without looking like anything is happening.

Try not to touch your horse’s face. Keep a good rhythm everywhere, look smooth. Don’t sit down. SMILE (the judges like it when you smile). Release more than necessary for 2’6. Stay in two-point after the fences, pretend like you’re not an eventer who is used to a mile long drop on the other side.

I got the Cliff Notes, and headed in for my first round. While it would have easily sufficed in the eventing world, it was certainly a warm up round in this world. I missed a few leads, got a bit confused with some striding (counting is hard!), and accidentally circled twice in the beginning because I didn’t like my first circle. Dear Kate: care less about the flatwork thing while you’re playing in hunter land.

The best thing about hunter shows? You can do several classes right in a row over the same course, the same jumps, and the same distances. Practice, practice, practice. If you don’t get it right, all you have to do is fix it the next time! Good thing too, because as it turns out, I needed the extra rounds in order to smooth out my hunter skillz.

However, by the third round, I finally got the course together in the way that I wanted. I got all my leads correctly, with one seamless change in the corner after the first diagonal. I got ALL my five stride lines, because I finally figured out that with a 15.1 hand horse, you have to get the perfect distance in over the first fence and then build just the slightest bit each stride to make it work. I successfully two-pointed the whole time, and overall felt like I succeeded in posing as “one of them”. 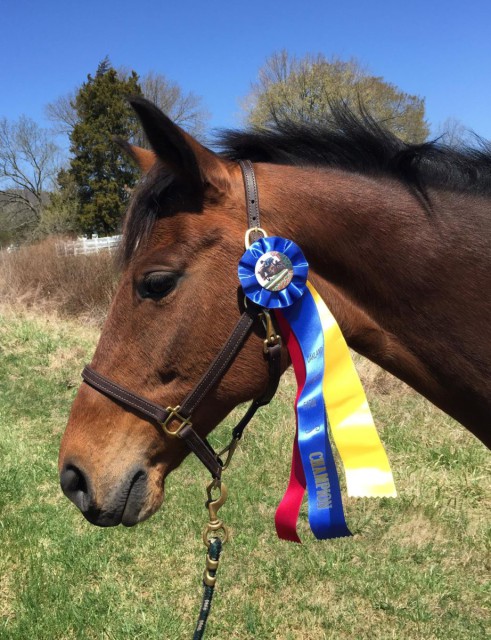 As it turned out, the two of us managed to scrape together scores good enough to be crowned Champions of the Low Schooling Hunter! There was a flat class included in the division, and I’m pretty sure that my immaculate walk-canter transitions really sealed the deal. Glad that flatwork came in somewhere, finally!

As an eventer, I can confidently say that the hunter world is definitely top of the list of stuff that we scoff at. I mean, how boring can you be to want to do the same course over and over and over? Your jumps aren’t even big, and what you call an “oxer” has like a three inch spread. Puhlease. Also, your horse should definitely not bend outside when cantering on the rail, that’s just not appropriate.

I still agree with these things, but having attempted to get four five-stride lines perfect while looking like I wasn’t doing anything at all, I have a new found appreciation for a job well done in this realm. I mean, I can make most courses work fine, and get over the jumps, but I do eventing, and nobody judges me on how I git-it-done sometimes.

I also realized the value of a horse that approaches and lands off the jump in the same balance and cadence. Having never owned such an animal myself, I never really enjoyed the simplicity of such a ride. It’s fun to not have to manage every stride all the time!

That being said, I went home immediately and did some gallops and jumped some properly sized fences over three feet immediately. There is no way I’ll ever convert, and would probably die of boredom if I had to compete for an entire day at a hunter show, but it’s always good to get a little taste of different styles, because you can never know where you’ll learn something new and useful for your training arsenal.

Don’t worry though, I’m going cross country schooling today, and running fast and jumping high, and definitely sitting my butt in the saddle and leaning back on drop fences.