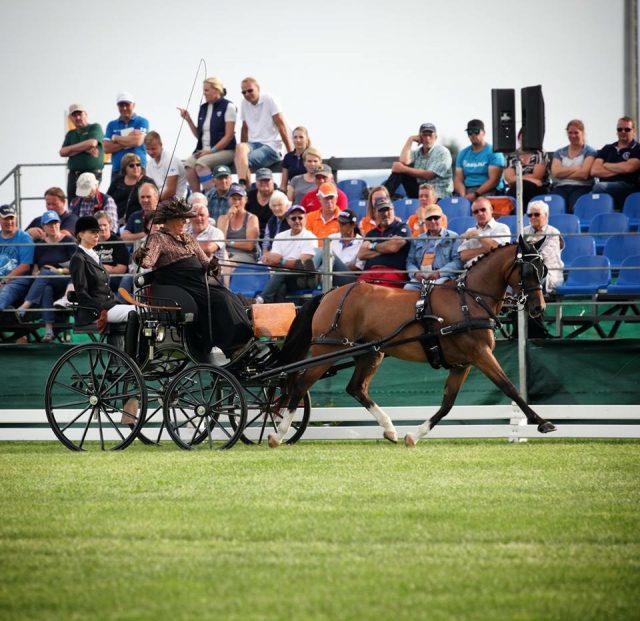 Reporting from the beautiful northern German town of Minden, site of the 2017 FEI Pony World Driving Championships. The weather here today was pleasant and cool with highs in the low 70s.

Today was single pony day, and competitors drove the 3*BHP1 test. That’s three-star test B for single horses and ponies. This test was new to the international scene in 2015. The test contains 33 transitions, four halts, a rein back, five movements requiring performance with the reins in one hand, two diagonal yields and canter work with the left lead canter coming off of a twenty meter half circle to the right. The bulk of the trot work is in collection or extension and asks transitions directly from one to the other. 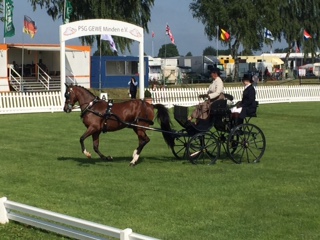 Tracey Morgan and her own Fuego 88. Photo by Danielle Aamodt.

Tracey Morgan and her own Fuego 88 led off for the Americans scoring a 53.61. They produced a steady, fairly error-free test. Rooster is a seasoned campaigner; he and Tracy were the sole U.S. representatives at the 2015 Pony Worlds and are the current U.S. Single pony champions. They end the day sitting in sixth place.

Miranda Cadwell and Canon’s Majestic Leyla drew the last slot of the day. Leyla and Randy are Marathon specialists and Randy did a terrific job keeping the lid on her super fit mare. They earned a score of 64.97 placing her 36th.

The judging panel gave nothing away, and scores were very tight with less than 18 points over the entire division. Team coach Thorsten Zarembowicz mentioned that despite the overall higher scores one must look at the spread. He feels the marathon will be very influential and both drivers have all to play for come Saturday.

For live scoring go to www.hoefnet.nl.