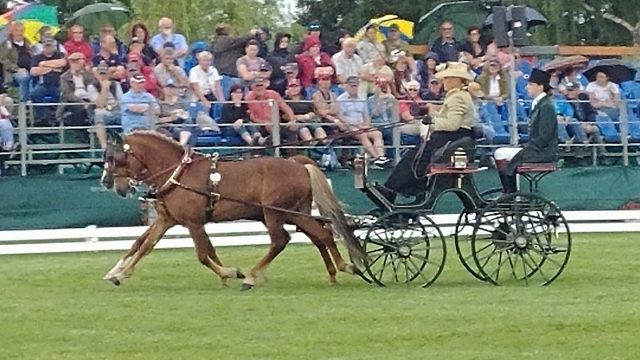 Competition in dressage at the Pony World Driving Championships continued today for pair ponies. Thirty-three pairs are entered in this division demonstrating their skill with test 3*BHP2. This test requires collection and extension at the trot, and also has five movements in which the reins must be held in one hand.

Temperatures were a bit warmer and breezy this morning. The judging panel remained the same, but the five judges switched positions. The leaderboard saw scores drop into the 40s, with the division leader Jan-Felix Pfeffer of Germany at the head of the class with a score of 44.01. Germany holds the top four positions at the close of pairs dressage.

Sunny this morning, the clouds rolled in around noon and the drizzle began just before lone U.S. pairs driver Katie Whaley with Tommy and Night Flyer rolled down the centerline. A consistent and accurate test earned the final USA competitor a 51.06 placing her 6th for the day. This score was a 12-point improvement from the CAI3* at Beekbergen two weeks ago.

U.S. drivers have the day off tomorrow as we are not fielding a four-in-hand team this year. Tonight is Nations Night, a traditional gathering in which each of the participating countries offer food selections to try specific to that country. USE Director of Driving Danielle Aamodt rounded up some American fare to sample and the large American contingent is looking forward to a good time.

For further information and live scores go to www.hoefnet.net.