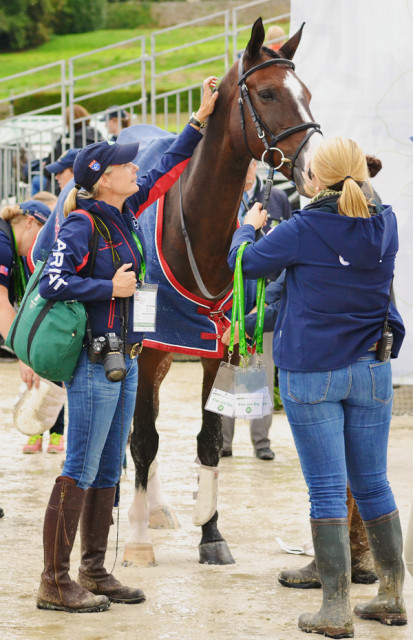 It’s been a wild, muddy day here at Haras du Pin, but Team USA has persevered through it all, putting in two very solid dressage tests to put us in a strong position after the first day of competition. Though we drew the first slot for the order of go — which is almost always considered a disadvantage — Buck Davidson and Ballynoe Castle RM made the most of it, scoring 48.5 as the first pair out.

Phillip Dutton and Trading Aces followed after the lunch break, scoring 43.8 to best their only four-star score as a pair from Rolex by nearly 10 full points. While the official WEG scoring is currently only counting the leading mark toward the team score, we can get a more accurate idea of Team USA’s position by averaging both marks so far.

Guru of all things eventing Pippa Kyle, eventing editor at Horse & Hound, crunched the numbers on the top three when averaging the two scores from each country, which puts Germany in first (81.9), New Zealand in second (91.2) and Great Britain in third (92) — AND the U.S. just lurking behind waiting to pounce in fourth place with 92.5.

We have two heavy hitters still to come tomorrow. Boyd Martin and Shamwari 4, my prediction for our best shot at an individual medal, scored 47.8 at Luhmühlen in their first major competition together to ultimately finish third. They’ve had two months to iron out the kinks in their partnership, and the horse is just simply a wow mover. They could easily pull out a test in the low 40s or high 30s.

Then there’s Lynn Symansky and Donner, our OTTB superstar — the only U.S. bred OTTB here at WEG and just one of two U.S.-bred horses in the competition — who typically can’t pull the low marks you see from the fancier movers. Or so we thought — until they blew this dressage test out of the water at Great Meadow, scoring 46.5.

It’s also notable that Boyd and Shamwari scored 42.0 at Great Meadow, and while that was a different occasion with just Sandy Phillips judging at a prep trial, we still have to take it as a real sign that Team USA is poised to be sitting in medal contention after dressage concludes tomorrow.

But what does that mean when taking cross country into consideration? Pierre Michelet’s course was already a monster track before taking the sloppy, muddy conditions into account. Now it’s quickly becoming Badminton 2.0, and William Fox-Pitt said in this afternoon’s press conference that “it’s not going to be a dressage competition.”

With major props to our USEF Selection Committee, we just happened to send some of our strongest cross-country combinations to contest WEG, and team coach David O’Connor has been preaching for months that the course was going to factor heavily into the final results. It seems the stars are aligning for Team USA, and while there’s still a long way to go, the team can smile tonight. Go USA.

[William Fox-Pitt: ‘It’s Not Going to be a Dressage Competition]