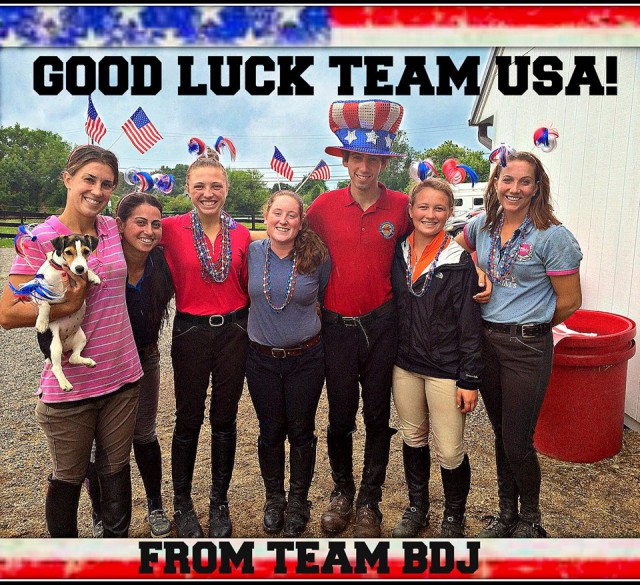 Team BDJ gets in the spirit! Photo submitted by Helene Gallagher.

Team USA has officially entered the final countdown leading up to the World Equestrian Games, as the horses shipped to the USET training facility in Gladstone, N.J., yesterday for training camp, which will be held today and tomorrow, before flying to France on Friday.

The team will have lessons with coach David O’Connor today, followed by vet evaluations and any last minute treatments needed to get the horses feeling their best for Normandy. Team show jumping coach Silvio Mazzoni will also be on site for jump schools with the riders during training camp.

The great migration to France officially begins tomorrow when some of the grooms fly over, with the remaining grooms and Dr. Susan Johns, one of the U.S. team vets, going over with the horses on Friday. All the team riders will be flying over this weekend, with the whole crew meeting up at Fursan Equestrian Center in Chantilly for the remainder of training camp starting Monday.

After an intensive week of lessons and final preparations in Chantilly, the horses will ship to Le Pin National Stud on Monday, Aug. 25, to get settled in for the Games. The first horse inspection is on Wednesday, Aug. 27, two weeks from today. Are you getting excited yet?

Teams like Great Britain, New Zealand, Australia and Ireland have all called up riders off their alternate lists due to minor injuries and lameness issues, but so far — knock on wood — all the U.S. horses have stayed sound and healthy.

That’s due in large part to the more protective approach David has taken with the horses in the lead up to Normandy, first team alternate Marilyn Little said this morning during a chat on her drive up to Gladstone for training camp.

“He went the protective road and chose to prepare the horses in a nurturing way,” Marilyn said. “If you look at Great Meadow, it was more like an Intermediate track. Before that, some of the horses ran at Jersey, and some didn’t. In contrast, the Germans pelted their horses at Aachen, and threw them against a wall to see what sticks before naming their team.

“Many of the British and Kiwi horses went out at Hartpury this past weekend and were really going for it even through that ground was hard. That is just the way they do it there, and they do that to keep the pressure on.”

We’ll know soon enough if the more conservative approach to preparing for the Games works to Team USA’s advantage. Definite entries will be named tomorrow, and Marilyn said if there are any last minute changes made to the squad, she and RF Demeter are ready if needed.

“I’m blessed that Demi is in such good form and I can prepare her for Normandy, and if that doesn’t work out, she can stay at that level for another week until Burghley,” Marilyn said. “It’s a timing thing — you want them to peak at exactly the right moment.”

Best of luck to Team USA in training camp this week, and we wish all the humans and equines safe flights as they start flying out tomorrow. Keep it locked on EN for all the Team USA news as we count down the days to Normandy. Go Eventing.