A great debate has ensued since the USEA alluded at last month’s Annual Convention that the Texas Rose Horse Park could become the permanent home of the American Eventing Championships. Area II member Lynne Kay Subler wrote the following as a letter to Jo Whitehouse, USEA CEO, and Rob Burk, USEA Senior Director of Programs, and she has been kind enough to allow us to publish it here on EN to foster further discussion on the fate of the AECs. Be sure to weigh in with your thoughts in the comments. 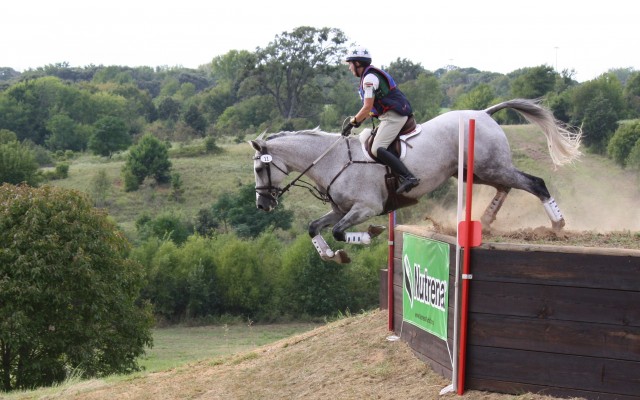 Kristi Nunnink and R-Star at the 2013 AECs in Texas. Photo by Liz Hall.

I understand from conversations with Mark Hart and Steve Symansky that one of the USEA’s priorities is growing its membership and that offering attractive programs for lower level eventers is an important part of your growth effort. In 2014, you moved The Chronicle of the Horse/USEA Adult Team Challenge (ATC) to Texas, and you are holding it concurrently with the Nutrena USEA American Eventing Championships (AECs). I understand that you are considering making Texas the permanent home of the (AECs). By extension, I’m assuming Texas would also become the permanent home of the ATC.

By way of introduction, my husband, Leo Subler and I are Adult Amateur USEA members. My mare Serendipity was the 2013 Area II Novice Champion and the 2012 Area II Beginner Novice Champion. I would very much like to enter her in the AECs, but Texas is too far away, so she won’t be entered.

My “day job” includes doing consumer research, so I did a quick study to see who is competing at the AECs. It turns out that Leo and I are probably not your only members with travel restrictions. The AECs primarily draw Beginner Novice, Novice and Training level competitors from the USEA Area hosting the competition and from other nearby USEA Areas.  Relatively few lower level competitors travel across the country.

These three pie charts show how important the location of the AECs is at a glance. Whether the AECs were located in Illinois, Georgia or Texas, the largest group of Beginner Novice, Novice and Training level competitors came from the USEA Area hosting the competition. A relatively limited number of competitors came from across the country  or even halfway across the country.

Percentage of Lower Level AEC Competitors from Each USEA Area 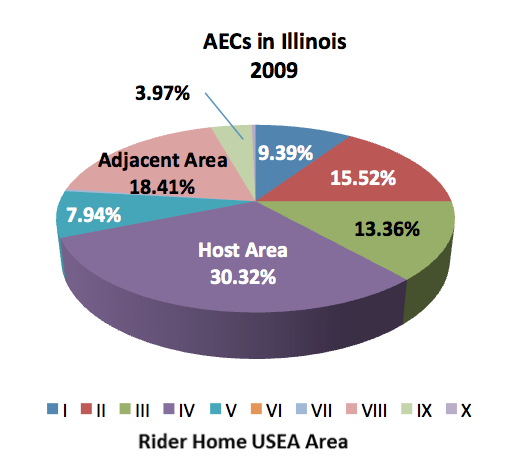 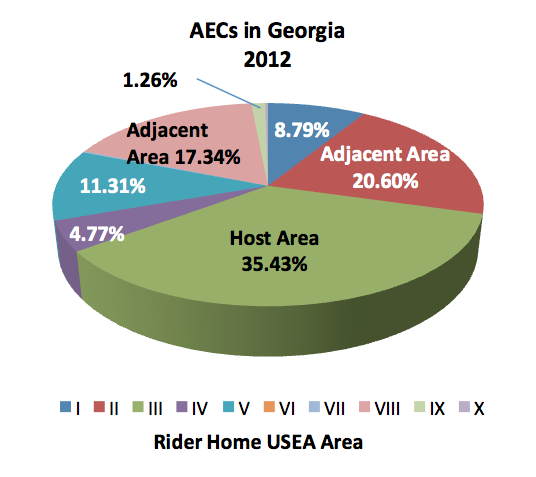 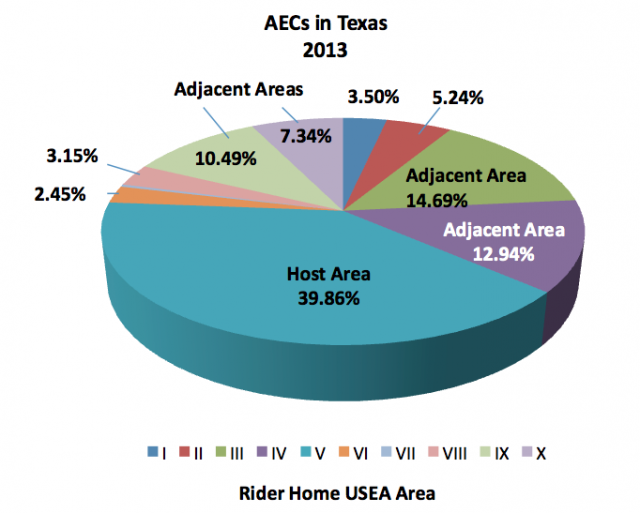 (The following Areas do not appear on the pie charts because they contributed less than 1% of competitors:

I’m willing to bet that in 2014, the majority of competitors in The Chronicle of the Horse/USEA Adult Team Challenge come from Area V and its nearby Areas just as the majority of AEC competitors did in 2013. It can be a struggle to keep one horse sound and get the horse and its adult rider prepared for a local competition. Successfully getting a team of horses and adult riders to a competition hours away is exponentially harder. The time commitment and long odds of success will convince many members from the Northeast, Mid-Atlantic and West Coast that it isn’t realistic to enter the ATC while it is in Texas.

In summary, I understand that growing USEA membership is an important goal, and that one way you are working to retain existing members and attract new ones is by offering programs like the AECs and ATC. The geographic location of the AECs and ATC very much matters to your lower level members. The majority of them don’t travel across the country or even halfway across the country to compete.  My husband and I are great examples. We would like to enter Serendipity in the AECs, but we won’t because Texas is too far away.

Since you have members located throughout the U.S., the best way to make the AECs and ATC attractive to the majority of your lower level members is to rotate the competitions to venues on both coasts as well as in the center of the country and to include locations in the north, south, and the mid-section. While I know this is more work for the USEA than selecting a single location and causes headaches for some organizers, it makes competing in the AECs and ATC attractive to the largest number of your lower level riders and owners.